Trump Comes to Israel Citing a Palestinian Deal as Crucial 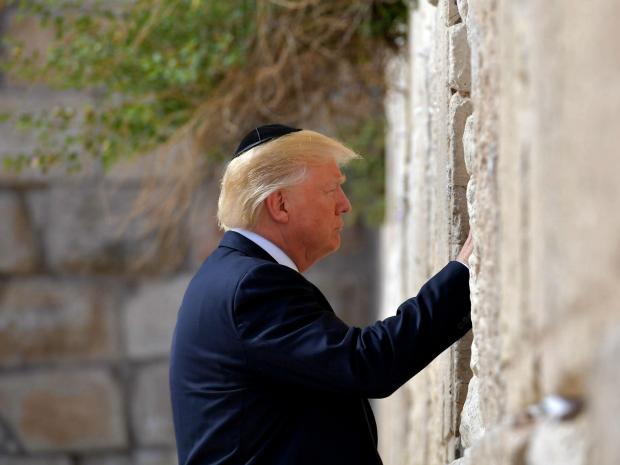 President Trump began a two-day visit to Israel on Monday with a blunt assessment for Prime Minister Benjamin Netanyahu: If Israel really wants peace with its Arab neighbors, the cost will be resolving the generations-old standoff with the Palestinians.

For years, Mr. Netanyahu has sought to recalibrate relations with Sunni Arab nations in a mutual bid to counter the Shiite-led Iran, while subordinating the Palestinian dispute as a secondary issue. But as Mr. Trump arrived in Jerusalem after meetings in Saudi Arabia, the president indicated that he and those Arab states see an agreement with the Palestinians as integral to that new regional alignment.

“On those issues, there is a strong consensus among the nations of the world — including many in the Muslim world,” Mr. Trump said. “I was deeply encouraged by my conversations with Muslim world leaders in Saudi Arabia, including King Salman, who I spoke to at great length. King Salman feels very strongly and, I can tell you, would love to see peace with Israel and the Palestinians.”

Mr. Trump added that line to the remarks prepared for him, in effect tying the future of the anti-Iran coalition to the Palestinian issue despite Mr. Netanyahu’s longtime efforts to unlink the two. “There is a growing realization among your Arab neighbors that they have common cause with you in the threat posed by Iran, and it is indeed a threat, there’s no question about that,” Mr. Trump said.

The president’s arrival here opened a new chapter in Middle East peacemaking, one that will test whether a career of business deal-making can translate to success in the world of international diplomacy.

Mr. Trump sought to showcase his friendship with Mr. Netanyahu as the two shared dinner with their wives and called each other “Donald” and “Bibi,” the prime minister’s nickname.

But neither publicly cited any concrete steps in pursuing a peace agreement. Mr. Trump did not formally recognize Jerusalem as the capital of Israel, as some Israeli officials hoped he would do since he had already shelved for now his promise to move the American Embassy here from Tel Aviv. Nor for that matter did he publicly press Israel to curb settlement construction in the West Bank as Palestinians hoped.

Mr. Netanyahu offered nothing more than a few modest gestures like extending the hours at the border crossing between the West Bank and Jordan, recycled from previous moments in the long-running dispute with the Palestinians. During his most extended comments, toward the end of the day, Mr. Netanyahu skipped right over the Palestinian question to focus on Iran.

He, too, saw the possibility of an accommodation with Arab neighbors but did not tie it to the Palestinian dispute. “For the first time in my lifetime, I see a real hope for change,” he told Mr. Trump. “The Arab leaders who you met yesterday could help change the atmosphere, and they could help create the conditions for a realistic peace.”

Even as they talked, the pressures that underscore the complexities of any negotiation were evident. More than 1,000 Palestinians in the occupied West Bank marched to the Qalandiya checkpoint from Ramallah, carrying posters of Palestinian inmates on hunger strike in Israeli prisons, and setting off clashes with Israel soldiers who fired tear-gas containers, rubber bullets and live ammunition.

In a separate incident, Israeli authorities reported that a Palestinian teenager who tried to stab police officers near a Palestinian town on the outskirts of Jerusalem was shot to death.

On the other side of the equation, Mr. Netanyahu came under continuing pressure from the right wing of his governing coalition not to make concessions. Naftali Bennett, a pro-settler cabinet minister, used the opportunity of meeting Mr. Trump in an airport receiving line to press him to recognize Jerusalem as Israel’s capital.

“He can be the one who goes into history,” Mr. Bennett told an Israeli radio station. Mr. Trump’s reported reply was noncommittal. “Trump said, ‘That’s an idea,’” Mr. Bennett recalled.

To some on the political left, the president’s message linking an anti-Iran coalition to peace with the Palestinians seemed a chance that Mr. Netanyahu should seize.

“The regional opportunity is ready and ripe,” Isaac Herzog, head of the opposition Labor Party, said in an interview after meeting Mr. Trump in the same receiving line. “I was very pleased as one who leads the Israeli opposition and the peace camp in Israel. We were very pleased that the president showed he is trying to break the impasse.”

Mr. Trump arrived on what was believed to be the first open, direct flight to Israel from Saudi Arabia, which do not have diplomatic relations, a sign of the possibility he sees for what he has called “the ultimate deal.”

After meeting with Reuven Rivlin, who holds the largely ceremonial position of president of Israel, the president toured the Church of the Holy Sepulcher, home of what is believed to be the tomb of Jesus Christ. He then became the first sitting president to visit the Western Wall, the holiest site for Jewish prayer, where he donned the traditional skullcap and left a note in a crevice.

On Tuesday, Mr. Trump is to travel the short distance to Bethlehem, in the West Bank, to meet with President Mahmoud Abbas of the Palestinian Authority. Mr. Trump is then scheduled to return to Jerusalem to lay a wreath at Yad Vashem, the Holocaust remembrance center, and to deliver a speech at the Israel Museum.

At the airport arrival ceremony, Mr. Netanyahu repeated his longstanding position that he “shares the commitment to peace” but with the same conditions as always. “Israel’s hand is extended in peace to all our neighbors, including the Palestinians,” he said. “The peace we seek is a genuine and durable one, in which the Israeli state is recognized, security remains in Israel’s hands, and the conflict ends once and for all.”

No previous American president has come to Israel this early in his tenure. Bill Clinton visited in his second year in office and Jimmy Carter in his third, while Richard M. Nixon, George W. Bush and Barack Obama all waited until their second terms to make the trip.

But a visit that was once anticipated as a powerful expression of solidarity between two like-minded leaders, Mr. Trump and Mr. Netanyahu, has become more complicated amid a series of logistical and political stress points.

Among other things, Mr. Trump last week disclosed to Russia’s foreign minister and ambassador some classified information that came from Israel about an Islamic State plot, potentially jeopardizing the Israeli intelligence source and deeply angering some Israeli security officials.

Determined not to spoil the visit, Mr. Netanyahu had resolved not to mention the intelligence breach publicly. When a reporter asked the two leaders about it on Monday, the prime minister brushed it off. “Intelligence cooperation is terrific,” he said. “It’s never been better.”

The $110 billion in arms sales that Mr. Trump announced in Saudi Arabia was also a source of concern in Israel. Secretary of State Rex W. Tillerson sought to reassure the Israelis. “There has been nothing entered into with the arms sales agreements with the kingdom of Saudi Arabia or any of the other countries that do not fully allow us to fulfill our commitments to Israel and the longstanding security arrangements we have with Israel,” he told reporters on Air Force One.

Still, much as he was in Saudi Arabia, Mr. Trump was greeted by many in Israel as a welcome change from Mr. Obama, whose relationship with Mr. Netanyahu soured early on after Mr. Obama called for a settlement freeze, and only worsened when he struck an agreement with Iran intended to curb its nuclear program.

Mr. Trump repeated his criticism of the nuclear deal on Monday with Mr. Netanyahu standing by his side. He also credited Mr. Netanyahu with being serious about peace with the Palestinians, an assessment the prime minister’s critics do not share, and expressed optimism about reaching an agreement.

“I’ve heard it’s one of the toughest deals of all,” he said, “but I have a feeling we’re going to get there eventually. I hope.”