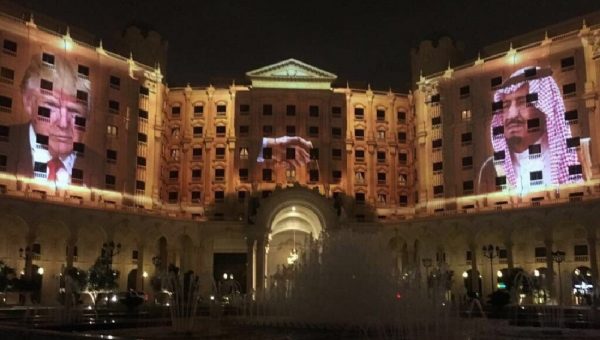 The luxury hotel projected portraits of Trump and King Salman onto the building, both images stretching five floors each. The Ritz’s decor features gold fixtures, a large lobby and other features similar to Las Vegas hotels.

We've arrived at the palatial Ritz hotel in Riyadh where Trump will be staying. Very Vegas. But with some extra exterior lighting. pic.twitter.com/9Xibrezo2w


Trump will visit Saudi Arabia, Israel, Italy, Belgium and the Vatican during his eight-day trip. The White House has called the inaugural international trip a chance to unify “the faithful of three of the world’s greatest religions.”

The travel comes as Trump faces pushback from Democrats and even Republicans regarding his handling of the FBI and its Russian investigation.