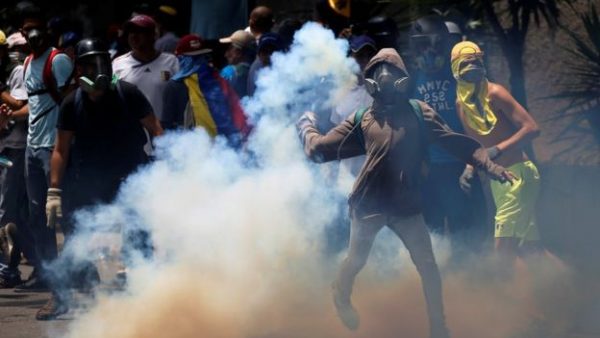 By Joshua Goodman and Christine Armario

BOGOTA, Colombia — The U.S. on Thursday slapped new sanctions on eight members of Venezuela’s Supreme Court, accusing them of abusing power and damaging their nation’s democratic fabric as the Trump administration raises concerns that socialist President Nicolas Maduro is moving toward one-party, authoritarian rule.
Those blacklisted by the Treasury Department include Maikel Moreno, the president of the government-packed Supreme Court, as well as all seven justices who signed a ruling in late March stripping the opposition-controlled congress of its last remaining powers.The ruling was later partially reversed amid a backlash of international criticism, but it sparked a protest movement that has continued for nearly two months and on Thursday claimed another victim, bringing the death toll to 45.

“The Venezuelan people are suffering from a collapsing economy brought about by their government’s mismanagement and corruption. Members of the country’s Supreme Court of Justice have exacerbated the situation by consistently interfering with the legislative branch’s authority,” U.S. Treasury Secretary Steven T. Mnuchin said. “By imposing these targeted sanctions, the United States is supporting the Venezuelan people in their efforts to protect and advance democratic governance in their country.”

The action marked the second time the Trump administration has stripped high-level Venezuelan officials of their U.S. assets and banned Americans from any business dealings with them. In February, the U.S. ordered sanctions against Vice President Tareck El Aissami, accusing him of playing a major role in international drug trafficking.

Earlier Thursday, Trump expressed dismay about Venezuela’s troubles, asking aloud how a nation sitting atop the world’s largest oil reserves could be stricken by so much poverty and unrest.

“You sort of have to wonder: Why is that happening? How is that possible? Hopefully that will change and they can use those assets for the good. Because right now what’s happening is really a disgrace to humanity,” Trump said after meeting at the White House with Colombian President Juan Manuel Santos.

Venezuelan Foreign Minister Delcy Rodriguez took to Twitter late Thursday to call the U.S. sanctions “outrageous and unacceptable.” She said that the executive order was one more example of U.S. attempts to interfere and destabilize Maduro’s government and that the president strongly backs the Supreme Court magistrates who are “victims of U.S. imperial power.”

Venezuela’s Supreme Court has long been filled with government loyalists. The court’s constitutional chamber declared null and void eight National Assembly laws between January and October 2016, after just one such ruling in the previous 200 years, legal experts say.

In issuing its sanctions ruling, the U.S. Treasury Department cited several court rulings since the opposition gained control of congress. One was the approval of Maduro’s budget and his appointment of two government sympathizers to the National Electoral Council, decisions that are supposed to require National Assembly approval. Another was a ruling a year ago declaring null all acts of the National Assembly issued while it remains in contempt of an earlier ruling requiring the congress to unseat three elected lawmakers over still-unproven allegations of voting fraud.

Moreno, while not directly involved in those decisions, has defended them and from the bench also upheld a nearly 14-year sentence for opposition leader Leopoldo Lopez a day after Trump called for his release at a White House meeting with his wife.

Venezuelan government officials dispute the notion that the country’s justice system is politicized. Maduro has said he had no prior knowledge of the Supreme Court ruling against congress in March, pointing to the objections raised by Venezuela’s chief prosecutor as proof the country’s institutions operate independently.

The new sanctions come as Maduro is facing increasing pressure at home and abroad to hold elections. On Thursday, several thousand demonstrators once again collapsed Caracas and other cities in protests that ended in clashes with security forces firing tear gas and rubber bullets. More than 2,000 people have been detained and hundreds injured during almost daily protests.

In the western city of Maracaibo, a 25-year-old was killed when he was crushed by a truck during a protest, the chief prosecutor’s office said. Local media said he was a medical student belonging to the so-called “Green Cross,” a group of volunteer first-responders that is a fixture at opposition marches

Maduro has vowed to resolve his nation’s crisis by convoking a special assembly to rewrite Venezuela’s constitution. The opposition rejects that plan as another attempt by the president to tighten his grip on power, and opposition leaders are calling on Venezuelans to continue to take to the streets in protest.