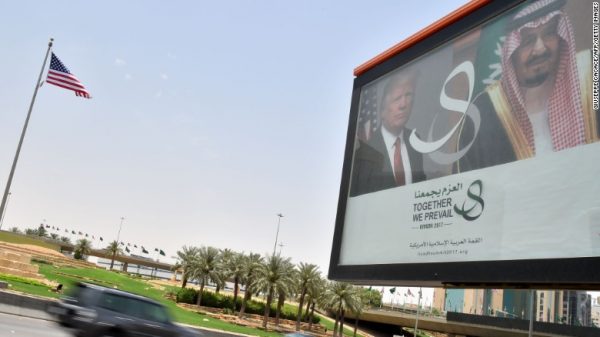 His advisors are already talking about a historic trip: Donald Trump is the first US president since Jimmy Carter whose first international trip begins not in Canada or Mexico but in Saudi Arabia – far away from escalating problems at home.

“I think it is striking,” Elliot Abrams of the Council on Foreign Relations (CFR) said of Trump’s travel route. “The president during his campaign made it pretty clear that he’d like to get out of these wars in the broader Middle East, but… his first stop is the Middle East.”

A speech against radical Islam

The president is traveling there “to unite the broader Muslim world against common enemies,” the White House said. Trump will meet King Salman bin Abdulaziz Al Saud and other members of the royal family and take part in a meeting of the Gulf states. A keynote speech against radical Islam is also slated to be delivered to leaders of some 50 Arab and Muslim countries, who were specially invited to Riyadh to meet the American president.

“In Saudi Arabia, I will speak with Muslim leaders and urge them to fight hate and extremism and to pave the way for the peaceful future of their religion,” the president said ahead of the trip, adding that his message will surely be welcome in Riyadh.

Leaders of the Gulf states appear enthusiastic about Trump’s presidency – despite his anti-Muslim campaign statements and his attempt to introduce a travel ban for seven predominantly Muslim countries.

“I think you’ll see a return to a more traditional US approach towards the Middle East in contrast to the Obama approach,” said Nile Gardiner, a center director at the conservative Heritage Foundation, which advises the American government on important issues in foreign and domestic policy.

Gardiner criticized Obama for having neglected important US allies in the region. The former president’s policy on Iran damaged US relations with the Saudis, Gardiner explained. Trump’s predecessor criticized the kingdom for its support of fundamentalist Islam and for numerous human rights abuses.

“The goal of this visit is to rebuild the US-Saudi partnership after a period of decline and to reassure Saudi Arabia that the United States is committed to combating Iran’s aggressive influence in the region,” Gardiner said. The Saudis are set on cooperating with the Americans, he added. The kingdom needs the US as a security guarantor in the region more than the US now needs Saudi Arabia.

What is in America’s interest?

But Emma Ashford of the liberal Cato Institute was not convinced by the thrust of the president’s policy.

“Trump is going to have a smoother relationship with Saudi Arabia, which I think is not good for US foreign policy objectives,” she said. For the Obama administration, it was important to support women’s rights, human rights and civil society. According to Ashford, Trump has made it clear that these are not priorities for him.

Unlike his predecessor in Cairo in 2009, Trump’s speech in Riyadh will be aimed not at the people of the Arab world but at their leaders. The main principle of Trump’s foreign policy seems to be that controversial issues, such as human rights abuses, will only be spoken about behind closed doors – if at all.

“America first” or a leadership role

The US president, who presents himself as a deal-maker, also aims to close an arms sale while in Saudi Arabia. A deal valued at $100 billion (89.7 billion euros) is expected to be signed during Trump’s visit. As one of his advisors summed it up: Trump’s trip will show that his “America First” policy is compatible with the US role as global leader.

“The mood music is going to be very different than during the Obama presidency,” said the Heritage Foundation’s Gardiner.

Abrams from the CFR also pointed out how comforting a trip to friendly Saudi Arabia must be for Trump as he faces several controversies at home.

“We’re immersed here in Washington with the FBI issue and tweets and all of this,” he said. In Saudi Arabia, “he is still seen as the president of the United States, with whom they want to meet and whom they want to hear.” And many of these leaders, Abrams added, will want to be photographed with The Donald.