Israel is the source of the secrets that Trump leaked to Russia , US official 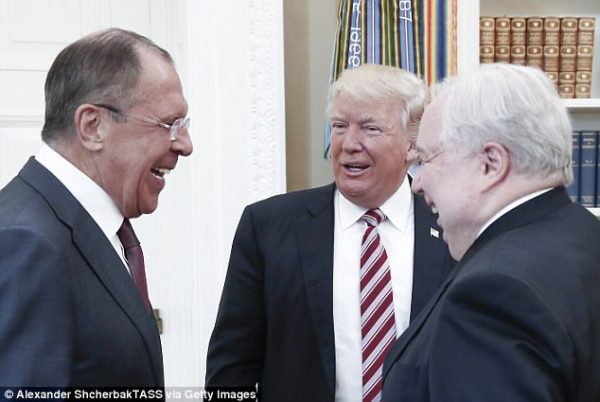 ALL SMILES: Russia’s Foreign Minister Sergei Lavrov, US President Donald Trump, and Russian envoy
Share:
The classified intelligence that President Trump disclosed in a meeting last week with Russian officials at the White House was provided by Israel, according to a current and a former American official familiar with how the United States obtained the information. The revelation adds a potential diplomatic complication to an episode that has renewed questions about how the White House handles sensitive intelligence.

Israel is one of the United States’ most important allies and runs one of the most active espionage networks in the Middle East. Mr. Trump’s boasting about some of Israel’s most sensitive information to the Russians could damage the relationship between the two countries and raises the possibility that the information could be passed to Iran, Russia’s close ally and Israel’s main threat in the region.

Israeli officials would not confirm that they were the source of the information that Mr. Trump shared, which was about an Islamic State plot. In a statement emailed to The New York Times, Ron Dermer, the Israeli ambassador to the United States, reaffirmed that the two countries would maintain a close counterterrorism relationship.

“Israel has full confidence in our intelligence-sharing relationship with the United States and looks forward to deepening that relationship in the years ahead under President Trump,” Mr. Dermer said. Mr. Trump said on Twitter that he had an “absolute right” to share information in the interest of fighting terrorism and called his meeting with the Russians “very, very successful” in a brief appearance later at the White House.

On Capitol Hill, reaction split along party lines, but even many Republicans indicated that they wanted the White House to show more discipline.

“There’s some alignments that need to take place over there, and I think they’re fully aware of that,” said Senator Bob Corker, Republican of Tennessee and the chairman of the Foreign Relations Committee. “Just the decision-making processes and everybody being on the same page.”

In the meeting last week, Mr. Trump told Sergey V. Lavrov, the Russian foreign minister, and Sergey I. Kislyak, the Russian ambassador, details about the Islamic State plot, including the city in Syria where the ally learned the information, the current official said. At least some of the details that the United States has about the Islamic State plot came from the Israelis, said the officials, who were not authorized to discuss the matter and spoke on the condition of anonymity.

It was not clear whether the president or the other Americans in the meeting were aware of the sensitivity of what was shared. Only afterward, when notes on the discussion were circulated among National Security Council officials, was the information flagged as too sensitive to be shared, even among many American officials, the officials said.

Intelligence officials worried that Mr. Trump provided enough details to effectively expose the source of the information and the manner in which it had been collected.

Lt. Gen. H. R. McMaster, the national security adviser, defended Mr. Trump’s move, saying the president made a spur-of-the-moment decision to tell the Russians what he knew and did not expose the source of the intelligence because he was not told where it came from.

Moreover, General McMaster said that by discussing the city where the information originated, the president had not given away secrets. “It was nothing that you would not know from open-source reporting in terms of a source of concern,” he said. “And it had all to do with operations that are already ongoing, had been made public for months.”

Two senior United States military officials said that Mr. Trump’s disclosures seemed to align with an increasing concern that militants responsible for such attacks were slipping out of Raqqa, the Islamic State’s self-proclaimed capital, and taking refuge in other cities under their control, such as Deir al-Zour and Mayadeen.

These officials said they had no specific knowledge of what Mr. Trump told the two senior Russian diplomats in the Oval Office last week, or how that related to a likely decision expected soon by the Homeland Security Department to expand its ban on carrying portable electronics. But the officials said the timing of the events seemed hardly a coincidence.

American and British authorities in March barred passengers from airports in 10 predominantly Muslim countries from carrying laptop computers, iPads and other devices larger than a cellphone aboard inbound flights to the United States after intelligence analysts concluded that the Islamic State was developing a type of bomb hidden in batteries. Homeland Security officials are considering whether to broaden the ban to include airports in Europe and possibly other places, American security officials said Tuesday.

Mr. Trump’s disclosure was also likely to fuel questions about the president’s relationship with Moscow at the same time that the F.B.I. and congressional committees are investigating whether his associates cooperated with Russian meddling in last year’s election. Mr. Trump has repeatedly dismissed such suspicions as false stories spread by Democrats to explain their election defeat, but his friendly approach toward President Vladimir V. Putin in spite of Moscow’s intervention in Ukraine and other actions has stirred controversy.

The timing of the episode also threatened to overshadow Mr. Trump’s first trip abroad as president. He is scheduled to leave on Friday for Saudi Arabia, Israel, Italy and Belgium.

In Israel, he was already likely to contend with Israeli officials rattled by the administration’s refusal to say outright that the Western Wall, one of the holiest prayer sites in Judaism, lies in Israel, and is not subject to territorial claims by the Palestinians. The wall is in Jerusalem — part of what is known to Jews as the Temple Mount and to Muslims as the Noble Sanctuary — and is considered one of the holiest sites in Islam. Both the Israelis and Palestinians claim the city as their capital.

Now, the Americans and Israelis will have to contend with the serious breach of espionage etiquette. Israel had previously urged the United States to be careful about the handling of the intelligence that Mr. Trump discussed, the officials said.

Former officials said it was not uncommon for presidents to unintentionally say too much in meetings, and they said that in administrations from both parties, staff members typically established bright lines for their bosses to avoid crossing before such meetings.

“The Russians have the widest intelligence collection mechanism in the world outside of our own,” said John Sipher, a 28-year veteran of the C.I.A. who served in Moscow in the 1990s and later ran the agency’s Russia program for three years. “They can put together a good picture with just a few details. They can marry President Trump’s comments with their own intelligence, and intelligence from their allies. They can also deploy additional resources to find out details.”

Nonetheless, General McMaster said he was not concerned that information sharing among partner countries might stop.

“What the president discussed with the foreign minister was wholly appropriate to that conversation and is consistent with the routine sharing of information between the president and any leaders with whom he’s engaged,” General McMaster said at a White House briefing, seeking to play down the sensitivity of the information that Mr. Trump disclosed.

But General McMaster appeared to acknowledge that Thomas P. Bossert, the assistant to the president for Homeland Security and counterterrorism, had called the C.I.A. and the National Security Agency after the meeting with the Russian officials. Other officials have said that the spy agencies were contacted to help contain the damage from the leak to the Russians.

General McMaster would not confirm that Mr. Bossert made the calls but suggested that if he did, he was acting “maybe from an overabundance of caution.”

The episode could have far-reaching consequences, Democrats warned. Any country that shares intelligence with American officials “could decide it can’t trust the United States with information, or worse, that it can’t trust the president of the United States with information,” said Representative Adam B. Schiff of California, the top Democrat on the House Intelligence Committee.

“I have to hope that someone will counsel the president about just what it means to protect closely held information and why this is so dangerous, ultimately, to our national security,” Mr. Schiff said at a policy conference in Washington sponsored by the Center for American Progress, a liberal group.

Russia dismissed the reports. A spokeswoman for the Russian Foreign Ministry denied that Mr. Trump had given classified information to Russian officials, and she denigrated American news reports of the disclosure as “fake.”

Sharing the United States’ own intelligence with Russia, much less information from a foreign ally, has long been a contentious issues in American national security circles. In fact, many Republicans strenuously objected last year when the Obama administration proposed sharing limited intelligence about Syria with Russia.

One of the Republicans was Mike Pompeo, the former congressman from Kansas who now runs the C.I.A. In an appearance last year on a podcast hosted by Frank Gaffney, a former Reagan administration official now best known for his anti-Muslim views, Mr. Pompeo said sharing intelligence with the Russians was a “dumb idea.”