Experts warn of new wave as virus spreads to Asia 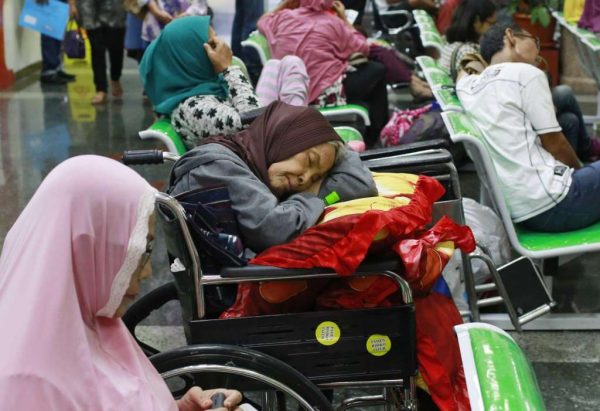 A patient takes a nap on her wheelchair as she waits with others at the registration desk at Dharmais Cancer Hospital in Jakarta, Indonesia, Monday, May 15, 2017. Global cyber chaos was spreading Monday as … more
Share:

The worldwide “ransomware” cyberattack spread to thousands more computers on Monday as people across Asia logged in at work, disrupting businesses, schools, hospitals and daily life. But no new large-scale outbreaks were reported, and British officials said a feared second wave of infections had not materialized.

The new infections were largely in Asia, which had been closed for business when the malware first struck. In Britain, whose health service was among the first high-profile targets of the online extortion scheme, Health Secretary Jeremy Hunt said “we have not seen a second wave of attacks.”

He said “the level of criminal activity is at the lower end of the range that we had anticipated.”

The malware, known as “WannaCry,” paralyzed computers running factories, banks, government agencies and transport systems, hitting 200,000 victims in more than 150 countries. Among those hit were Russia’s Interior Ministry and companies including Spain’s Telefonica and FedEx Corp. in the U.S.

Though the spread of the ransomware slowed Monday, many companies and government agencies were still struggling to recover from the first attack.

Carmaker Renault said one of its French plants, which employs 3,500 people, wasn’t reopening Monday as a “preventative step.”

Britain’s National Health Service said about a fifth of NHS trusts – the regional bodies that run hospitals and clinics – were hit by the attack on Friday, leading to thousands of canceled appointments and operations. Seven of the 47 affected trusts were still having IT problems Monday.

The British government denied allegations that lax cybersecurity in the financially stretched, state-funded health service had helped the attack spread.

Prime Minister Theresa May said “warnings were given to hospital trusts” about the Microsoft vulnerability exploited by the attackers.

NHS Digital, which oversees U.K. hospital cybersecurity, said it sent alerts about the problem – and a patch to fix it – to health service staff and IT professionals last month.

Tim Stevens, a lecturer in global security at King’s College London, warned that the incident should be a wakeup call to both the public and private sectors to incorporate security into computer systems from the ground up, rather than as an afterthought.

“This thing cannot be brushed under the carpet,” he said. “It is so visible and so global. There is going to have to be change at levels where change can be made.”

In Asia, where Friday’s attack occurred after business hours, thousands of new cases were reported on Monday as people came back to work.

The Japan Computer Emergency Response Team Coordination Center, a nonprofit group, said 2,000 computers at 600 locations in Japan were affected. Companies including Hitachi and Nissan Motor Co. reported problems but said they had not seriously affected their operations.

Chinese state media said 29,372 institutions there had been infected along with hundreds of thousands of devices.

Universities and other educational institutions in China were among the hardest hit, possibly because schools tend to have old computers and be slow to update operating systems and security, said Fang Xingdong, founder of ChinaLabs, an internet strategy think tank.

On social media, students complained about not being able to access their work, and people in various cities said they hadn’t been able to take their driving tests over the weekend because some local traffic police systems were down.

In Indonesia, the malware locked patient files on computers in two hospitals in the capital, Jakarta, causing delays.

Experts urged organizations and companies to immediately update older Microsoft operating systems, such as Windows XP, with a patch released by Microsoft Corp. to limit vulnerability to a more powerful version of the malware – or to future versions that can’t be stopped.

The attack held users hostage by freezing their computers, popping up a red screen with the words, “Oops, your files have been encrypted!” and demanding money through online bitcoin payment – $300 at first, rising to $600 before it destroys files hours later.

As cybersecurity firms worked around the clock to monitor the situation and install a software patch, new variants of the rapidly replicating malware were discovered Sunday. One did not include the so-called kill switch that allowed researchers to interrupt the malware’s spread Friday by diverting it to a dead end on the internet.

Ryan Kalember, senior vice president at Proofpoint Inc., which helped stop its spread, said the version without a kill switch could spread. It was benign because it contained a flaw that prevented it from taking over computers and demanding ransom to unlock files but other more malicious ones will likely pop up.

“We haven’t fully dodged this bullet at all until we’re patched against the vulnerability itself,” Kalember said.

Microsoft distributed a patch two months ago that protected computers such an attack, but in many organizations it was likely lost among the blizzard of updates and patches that large corporations and governments strain to manage.

The president of Microsoft laid some of the blame at the feet of the U.S. government. Brad Smith criticized U.S. intelligence agencies, including the CIA and National Security Agency, for “stockpiling” software code that can be used by hackers. Cybersecurity experts say the unknown hackers who launched the attacks used a vulnerability that was exposed in NSA documents leaked online.

Tom Bossert, a homeland security adviser to President Donald Trump, said “criminals” were responsible, not the U.S. government. Bossert said the U.S. hasn’t ruled out involvement by a foreign government, but that the recent ransom demands suggest a criminal network.

Bossert told ABC’s “Good Morning America” that the attack is something that “for right now, we’ve got under control” in the United States.

So far, not many people have paid the ransom demanded by the malware, Europol spokesman Jan Op Gen Oorth told The Associated Press.

Eiichi Moriya, a cybersecurity expert and professor at Meiji University, warned that paying the ransom would not guarantee a fix.

“You are dealing with a criminal,” he said. “It’s like after a robber enters your home. You can change the locks but what has happened cannot be undone.”