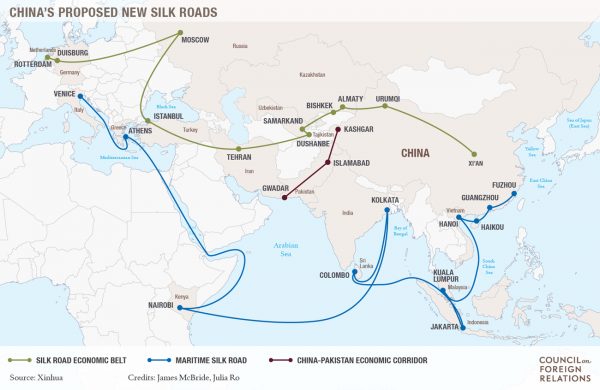 By Brenda Goh and Yawen Chen
BEIJING – Chinese President Xi Jinping pledged $124 billion on Sunday for his ambitious new Silk Road plan, saying everyone was welcome to join what he envisioned would be a path for peace and prosperity for the world.

China has touted what it formally calls the Belt and Road initiative as a new way to boost development since Xi unveiled the plan in 2013, aiming to expand links between Asia, Africa, Europe and beyond underpinned by billions of dollars in infrastructure investment.

“We should build an open platform of cooperation and uphold and grow an open world economy,” Xi told the opening of a summit on the new Silk Road.

“We should jointly create an environment that will facilitate opening up and development, establish a fair, equitable and transparent system of international trade and investment rules,” he added.

Xi pledged a massive funding boost to the new Silk Road, including:

– 130 billion yuan in loans from Export-Import Bank of China

– $1 billion to a South–South Cooperation fund

He did not give a timeframe.

Leaders from 29 countries are attending the forum, which ends on Monday.

China formally calls the scheme in English the Belt and Road initiative.

Some Western diplomats have expressed unease about both the summit and the plan as a whole, seeing it as an attempt to promote Chinese influence globally.

China has rejected criticism of the plan and the summit, saying the scheme is open to all, is a win-win and aimed only at promoting prosperity.

“What we hope to create is a big family of harmonious co-existence,” Xi said, adding pursuit of the initiative will not resort to outdated geopolitical maneuvering.

“What we hope to achieve is a new model of win-win cooperation.”

There are also several European leaders attending, including the prime ministers of Spain, Italy, Greece and Hungary.