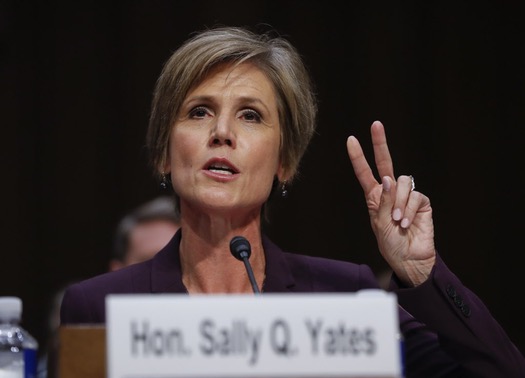 Less than a week into the Trump administration, Sally Q. Yates, the acting attorney general, hurried to the White House with an urgent concern. The president’s national security adviser, she said, had lied to the vice president about his Russian contacts and was vulnerable to blackmail by Moscow.

“We wanted to tell the White House as quickly as possible,” Ms. Yates told a Senate Judiciary subcommittee on Monday. “To state the obvious: You don’t want your national security adviser compromised with the Russians.”

But President Trump did not immediately fire the adviser, Michael T. Flynn, over the apparent lie or the susceptibility to blackmail. Instead, Mr. Flynn remained in office for 18 more days. Only after the news of his false statements broke publicly did he lose his job on Feb. 13.

Ms. Yates’s testimony, along with a separate revelation Monday that President Barack Obama had warned Mr. Trump not to hire Mr. Flynn, offered a more complete public account of Mr. Flynn’s stunning fall from one of the nation’s most important security posts.

It also raised fresh doubts about Mr. Trump’s judgment in keeping Mr. Flynn in place despite serious Justice Department concerns. White House officials have not fully explained why they waited so long.
“I don’t have any way of knowing what, if anything, they did,” Ms. Yates said. “If nothing was done, then certainly that would be concerning.”

At the heart of Monday’s testimony were Mr. Flynn’s conversations with the Russian ambassador to the United States, Sergey I. Kislyak. Mr. Flynn denied that they had discussed American sanctions, an assertion echoed by Vice President Mike Pence and the White House press secretary, Sean Spicer. But senior F.B.I. and Justice Department officials knew otherwise. Mr. Kislyak, like many foreign diplomats, was under routine surveillance, and his conversations with Mr. Flynn were recorded, officials have said. Investigators knew that Mr. Flynn had, in fact, discussed sanctions.

Much of what Ms. Yates said was previously known, but her testimony offered a dramatic firsthand account of a quickly unfolding scandal at the highest level of government.

On Jan. 26, Ms. Yates said, she called the White House counsel, Donald F. McGahn II, regarding “a very sensitive matter” that they could discuss only in person. Later that day, at the White House, she warned Mr. McGahn that White House officials were making statements “that we knew not to be the truth.” Ms. Yates said she explained to Mr. McGahn how she knew Mr. Flynn’s statements were untrue, though she did not go into details Monday, citing concerns about sensitive information.

It was not just a political concern, Ms. Yates replied. Intelligence services constantly look for leverage against foreign officials. If Mr. Flynn lied to his bosses, and Russian officials knew it, Moscow could use it as leverage against him. “This is a classic technique they would use going back to the Soviet era,” said James R. Clapper Jr., the former director of national intelligence, who testified alongside Ms. Yates.

Mr. McGahn also asked Ms. Yates for the underlying evidence, she said, and she told him how he could see it.

Nearly two weeks later, The Washington Post reported that Ms. Yates had expressed concerns to the White House about Mr. Flynn. He was fired, with the White House citing “an eroding level of trust.”

But it was clear from Ms. Yates’s testimony that the White House had known for weeks that Mr. Flynn had been untruthful. Senator Richard Blumenthal, Democrat of Connecticut, said that if the information had never been made public, “Michael Flynn might still be sitting in the White House as national security adviser.”

Even since leaving office, Mr. Flynn has been a persistent headache for Mr. Trump. He retroactively registered as a foreign lobbyist and failed to disclose Russian contacts, resurrecting questions about the administration’s close ties to Russia. The F.B.I. is investigating whether members of the Trump campaign colluded with Russian operatives to influence the 2016 presidential election.

Mr. Trump blamed Obama officials on Monday, noting on Twitter that it was his predecessor’s administration that gave Mr. Flynn a security clearance.

“General Flynn was given the highest security clearance by the Obama Administration — but the Fake News seldom likes talking about that,” Mr. Trump wrote.

Mr. Flynn, a former head of the Defense Intelligence Agency, has long been a controversial figure. He has incorrectly declared that Shariah, or Islamic law, is spreading in the United States and once wrote on Twitter, “Fear of Muslims is RATIONAL.” His dubious assertions were so common that subordinates called them “Flynn facts.”

Mr. Spicer sought to cast doubt on Mr. Obama’s warning, noting that the Obama administration had renewed Mr. Flynn’s security clearance in April 2016, well after his departure from the D.I.A.

“If President Obama was truly concerned about General Flynn, why didn’t they suspend his security clearance, which they approved just months earlier?” Mr. Spicer asked during his daily press briefing.

But Mr. Spicer’s comments also called into question the Trump transition team’s own assessment of Mr. Flynn. Gov. Chris Christie of New Jersey, who led the transition in the days after the election, wanted Mr. Flynn to be slotted as director of national intelligence, a cabinet-level job but one with narrower responsibilities. Mr. Christie had reservations about Mr. Flynn that he shared with Mr. Trump, according to three people close to the transition.

The wiretapped conversations between Mr. Flynn and Mr. Kislyak remain classified, and Ms. Yates avoided even acknowledging them. Senators, though, were far less circumspect in both their questions and their commentary.

Though Ms. Yates said she had expected the White House to act on her concerns, she spared the Trump administration outright criticism for not doing so. That is because she was fired on Jan. 30 after refusing to defend the president’s executive order banning refugees and travel from several predominantly Muslim countries. She said she was not sure what the White House had done after she left.

Ms. Yates said she stood by the decision that got her fired. She said she could not defend the president’s executive order, largely because Mr. Trump himself had indicated that it was intended to single out Muslims. Federal judges have since made similar findings.

Ms. Yates sidestepped questions about the F.B.I.’s investigation of Mr. Trump’s campaign and Russia. Mr. Clapper said he had seen no evidence of collusion between Russian operatives and the Trump campaign. But he also revealed that he had been unaware of the F.B.I. investigation and so was clearly not privy to all the facts. He said he had often left it to the F.B.I. director, James B. Comey, to decide when to tell him about open criminal investigations.

Mr. Comey revealed the investigation during congressional testimony in March, after it had been widely reported. Senior government officials have said that its existence was a closely guarded secret last year.

Mr. Clapper confirmed, though, that European officials had shared information on Russian links to Mr. Trump’s associates. The New York Times reported this sharing — from Britain, the Netherlands and other allies — in March.

“The specifics are quite sensitive,” Mr. Clapper said. He did not elaborate.