Erdogan angers Israel over slamming its “racist” treatment of Palestinians 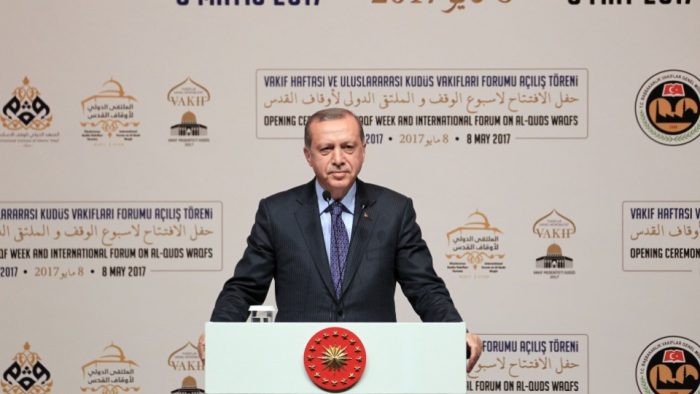 Turkish President Recep Tayyip Erdogan on Monday lashed out at Israel and urged more Muslims to visit the Temple Mount, or Noble Sanctuary, site in Jerusalem.

But, Erdogan suggested, “hundreds of thousands” of Muslims should be making the trip.

“We, as Muslims, should be visiting Al-Quds more often,” he said, referring to Jerusalem by its Arabic name, calling those visits “the greatest support to our brothers there.”

Erdogan said Jerusalem is holy for Muslims, Jews and Christians.

“Both in terms of our religion and historical responsibility, Al-Quds and the fight of our Palestinian brothers for rights and justice is of great importance to us. We will keep making efforts for Al-Quds to turn into a city of peace,” he said.

Erdogan criticized Israeli policy toward Palestinians as “racist” and “discriminatory” and said permanent peace in the Mideast would be impossible without a solution to the Palestinian issue.

“Here is the only solution: the establishment of a fully sovereign and independent Palestinian state, with East Jerusalem as its capital along the lines of 1967,” he said, according to Anadolu.

Israel argues that its blockade of Gaza, which Erdogan singled out for criticism in his speech, is necessary to prevent weapons from reaching Hamas, the militant group that controls the coastal enclave.

Erdogan also spoke out against plans by Israeli lawmakers to place restrictions on the Muslim call to prayer, or Adhan, Anadolu said.

Israel’s parliament has been considering a bill that would ban the use of loudspeakers to issue the Adhan between 11 p.m. and 7 a.m. The bill needs two further readings in parliament before it can be passed.

“If you have faith in your religion, why are you afraid of the Adhan?” Erdogan declared.

The Israel Foreign Ministry responded to Erdogan’s comments with a strongly-worded statement: “Whoever systematically violates human rights in their own country should not preach morality to the only true democracy in the region. Israel consistently protects total freedom of worship for Jews, Muslims and Christians — and will continue to do so despite the baseless smears launched against it.”

Erdogan’s remarks come less than a year after Turkey and Israel reached a deal to normalize diplomatic relations following a violent clash over a Turkish aid flotilla to Gaza in 2010.
CNN