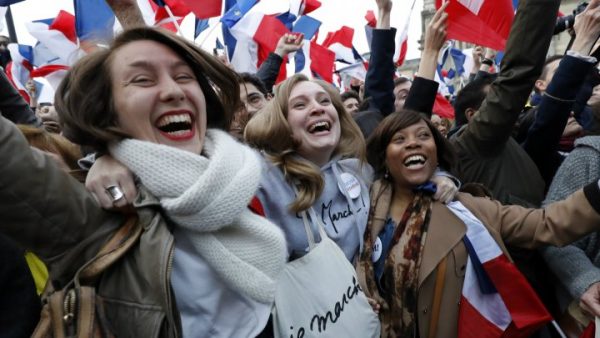 Macron supporters celebrate in front of The Louvre Museum in Paris on May 7, 2017. AFP
Share:

The news of Emmanuel Macron’s election as the new president of France was met with relief by European leaders. Brussels called it a victory “over the tyranny of fake news”.

European leaders hailed the victory of centrist Emmanuel Macron in the French election on Sunday as a vote for European unity and a blow to political forces that had sought to build on last year’s Brexit vote to tear apart the European Union.

Macron, a 39-year-old former economy minister who urged the French to embrace the EU and globalisation, defeated far-right nationalist Marine Le Pen by a score of roughly 65 percent to 35 percent, early results showed.

Le Pen had savaged the EU and its Schengen open border policies during her campaign, promising a “France first” approach that echoed the message President Donald Trump used in sweeping to power in the United States.

Victory over ‘the tyranny of fake news’

“Your victory is a victory for a strong united Europe and for German-French friendship,” German Chancellor Angela Merkel’s spokesman Steffen Seibert tweeted to Macron shortly after the election results were published.

Donald Tusk, the former Polish prime minister who chairs summits of European leaders, tweeted: “Congratulations to French people for choosing Liberty, Equality and Fraternity over tyranny of fake news” – an apparent reference to misleading stories about Macron that were spread on social media in the run-up to the vote.

In a tweet from her spokesperson, British Prime Minister Theresa May warmly congratulated Macron. “France is one of our closest allies and we look forward to working with the new President on a wide range of shared priorities,” she said.

Europe’s political establishment limped into 2017 fearful that the Trump and Brexit votes, fuelled by anger over immigration and rising economic inequality, could be replicated on the European continent in a mega-election year in which the Dutch and Germans were also voting.

But the election in France, the second largest economy in the euro zone after Germany, was always seen as the litmus test for European politics.

Had Le Pen won, many European officials acknowledged, it may have been the beginning of the end of the EU, Europe’s 60-year-old experiment in closer integration which delivered peace and prosperity for decades before succumbing to a series of crises over the past decade.

In a reminder that Macron’s victory by no means spells the end of the anti-establishment wave, Le Pen took to a stage in Paris and hailed her “historic” result – the best for her National Front in any presidential vote – and called on “all patriots” to join her in opposition to the new president.

Nigel Farage, former leader of Britain’s UKIP party and leading Brexit campaigner, said: “Macron offers five more years of failure, more power to the EU and a continuation of open borders. If Marine sticks in there, she can win in 2022.”
Latest   partial results