Trump assures Abbas on Israeli-Palestinians peace deal: “We will get it done” 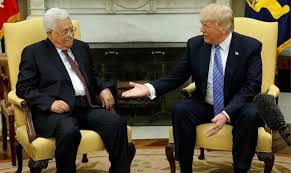 Trump spoke after welcoming Abbas to the White House for a meeting aimed at relaunching talks that have failed repeatedly to resolve the decades-old conflict.

“I’ve always heard that perhaps the toughest deal to make is the deal between the Israelis and the Palestinians,” Trump said. “Let’s see if we can prove them wrong.”

Speaking through a translator, Abbas echoed Trump’s upbeat tone, saying, “We believe that we can … be true partners to you to bring about a historic peace under your stewardship.”

Barely two and a half months after having received Israeli Prime Minister Benjamin Netanyahu, the US president greeted Abbas on the White House lawn, before ushering him into the Oval Office for their talks.

The long-shot effort to bring peace — which has eluded US presidents since the 1970s — got off to a rocky start early in Trump’s administration.

Trump renounced support for a Palestinian state and vowed to move the US embassy to Jerusalem, breaking two tenets of American policy held for decades.

That move would likely spark Palestinian fury and is privately seen by many in the Israel and US security establishments as needlessly inflammatory.

At the same time, Trump has urged Israel to hold back on settlement building in the West Bank, a longstanding concern of Palestinians and much of the world.

Pence said Trump is “personally committed to resolving the Israeli and Palestinian conflict” and “valuable progress” is being made.

The 82-year-old Abbas made the trip to Washington while politically unpopular back home, with polls suggesting most Palestinians want him to resign.

Abbas’s term was meant to expire in 2009, but he has remained in office with no elections held.

He will be hoping Trump can pressure Israel into concessions he believes are necessary to salvage a two-state solution to one of the world’s longest-running conflicts.

Palestinians are watching closely, including the leader of the radical Hamas movement Khaled Meshaal, who called on Trump to break with past approaches to Middle East peace.

“This is a historic opportunity to pressure Israel… to find an equitable solution for the Palestinian people,” he told CNN.

Hamas on Tuesday released a policy document that for the first time indicates a willingness to accept the idea of a Palestinian state within the borders that emerged after the 1967 Arab-Israeli war, although it stops short of recognizing Israel.

Palestinian officials have seen their cause overshadowed by worry over global concerns such as the war in Syria and Islamic State group jihadists, and want Trump’s White House to bring it back to the forefront.

One of Trump’s top advisers, Jason Greenblatt, held wide-ranging talks with both Israelis and Palestinians during a visit in March.

Abbas and Trump spoke by phone on March 11, and there are suggestions the US president could visit the Middle East this month.

A group of three influential Republican senators have called on Trump to ask Abbas to stop funding Palestinian prisoners and their families.

That could prose major domestic political headaches for Abbas, as he battles unpopularity and challenges from rival factions.

But mutual distrust between Palestinians and Israelis will be a formidable, if not impossible, barrier for Trump to overcome.

“The gap between the parties has probably never been greater,” said Ross.