Hezbollah denies seeking to ‘impose’ an electoral law, warns “Lebanon is on the brink of the abyss” 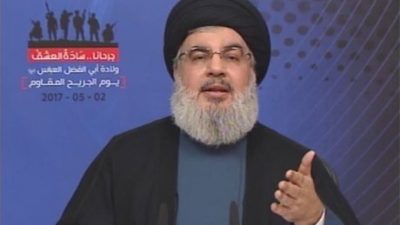 Hezbollah chief Hassan Nasrallah denied on  Tuesday  that his party is  seeking to “impose” the proportional representation electoral system on the country  and  warned that Lebanon is “on the brink of the abyss” regarding the issue of the electoral law.

Nasrallah  urged the local parties to reach common ground in a televised speech on the occasion of “Day of the Wounded” for the Islamic Resistance.

“Some parties are unfortunately exploiting the electoral law file to sabotage some alliances and settle scores,” he lamented.

“We have to convince each other to reach a settlement,” Nasrallah added.

Nasrallah noted that throughout the past few months and weeks, there has been “an attempt to accuse Hezbollah that it is seeking to prevent Christians from electing their MPs with their own votes.”

“The other accusation is that Hezbollah does not want an electoral law that gives the Free Patriotic Movement and the Lebanese Forces a third of parliament and I say that these are empty and  baseless accusations,” he said.

The Hezbollah chief described talks on the electoral law as sensitive and “understandable,” as some sides are dealing with it as a “matter of life or death.

Nasrallah said that Hezbollah had voiced its approval of  the Orthodox vote law, which allows each sect to elect its representatives.

“We are not the ones to be accused with such claims.” He stressed

The  so  called Orthodox Gathering Law, was proposed in 2012 by former Deputy Speaker Elie Ferzli, and was supported mainly by the FPM. It essentially calls for each sect to elect its own MPs within the country as a single district. Critics, however, said it would aggravate sectarian divisions in the country.

Nasrallah reiterated that his party supports the adoption of a full proportional law, but “remains open to other proposals.”

He denied that Hezbollah  used its weapons  to impose a proportional system on rivals.

“We never held a weapon in the face of anyone, not in the Cabinet or Parliament to press the adoption of such an electoral law,” he said, adding that Hezbollah had pushed for the adoption of a proportional vote law since it entered the Parliament in 1992.

“It’s a conviction based on the national interest. It’s the most fair and balanced law that isn’t based on sectarian interests.”

Hezbollah and Amal Movement were capable of securing their seats in Parliament regardless which electoral law is adopted, Nasrallah said.

“We are approaching the electoral law based on the country’s national interest to establish a true Lebanese Parliament.”

He expressed understanding to the concerns of all sects, particularly Druze and Christians, stressing that “dialogue was the only means to consensus.”

“The time has passed, the country is on the edge of the abyss. If we don’t reach a result all the alternatives are bad, from vacuum to the extension [of Parliament’s term] to [staging the elections based on the current] 1960 majoritarian system,” Nasrallah said.

He said that all parties had placed their proposals out on the table and now it’s time to assume responsibilities.

“This is not a joke,” he said  adding “The country’s fate is within our hands.”

He noted that Lebanon’s consensual democracy system “must be applied to the electoral law.”

“We must convince each other in order to reach a settlement over the electoral law,” Nasrallah urged.

“Let us all be modest and offer concessions to rescue our country,” he added.

Commenting on the Labor Day protests , Nasrallah warned about  the alarming unemployment rates in Lebanon.

“Unemployment means poverty, which indicates instigating problems,” he said calling on the Cabinet and Parliament to prioritize employment.

On intervention  in Syria Nasrallah said

“Fighting alongside Syrian forces in the neighboring country was ‘proper and timely,’ Nasrallah said claiming that

“Syria is victorious because the state and army didn’t fall”

He warned that takfiri groups pose threats to Sunnis before anyone else.