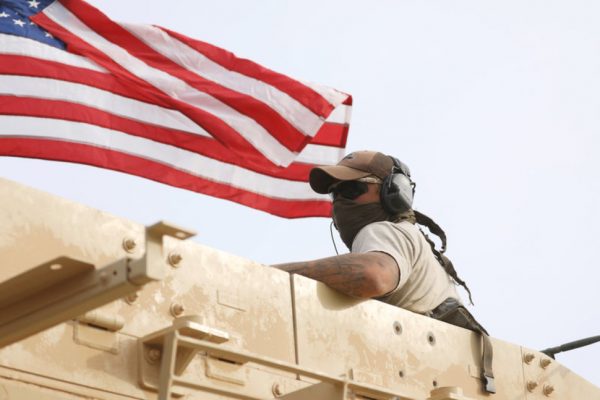 A member of U.S forces rides on a military vehicle in the town of Darbasiya next to the Turkish border, Syria April 28, 2017. REUTERS/Rodi Said REUTERS
Share:

U.S. armored vehicles are deploying in areas in northern Syria along the tense border with Turkey, a few days after a Turkish airstrike that killed 20 U.S.-backed Kurdish fighters, a Syrian war monitor and Kurdish activists said Friday.

Footage posted by Syrian activists online showed a convoy of U.S. armored vehicles driving on a rural road in the village of Darbasiyah, a few hundred meters from the Turkish border. Clashes in the area were reported between Turkish and Kurdish forces Wednesday a day after the Turkish airstrike which also destroyed a Kurdish command headquarters.

The Turkish airstrikes, which also wounded 18 members of the U.S.-backed People’s Protection Units, or YPG, in Syria were criticized by both the U.S. and Russia. The YPG is a close U.S. ally in the fight against the Islamic State group but is seen by Ankara as a terrorist group because of its ties to Turkey’s Kurdish rebels.

Further clashes between Turkish and Kurdish forces in Syria could potentially undermine the U.S.-led war on the Islamic State group.

A senior Kurdish official, Ilham Ahmad told The Associated Press that American forces began carrying out patrols along the border Thursday along with reconnaissance flights in the area. She said the deployment was in principle temporary, but may become more permanent.

A Kurdish activist in the area, Mustafa Bali, said the deployment is ongoing, adding that it stretches from the Iraqi border to areas past Darbasiyah in the largely Kurdish part of eastern Syria.

“The U.S. role has now become more like a buffer force between us and the Turks on all front lines,” he said. He said U.S. forces will also deploy as a separation force in areas where the Turkish-backed Syrian fighting forces and the Kurdish forces meet.

It is a message of reassurance for the Kurds and almost a “warning message” to the Turks, he said. 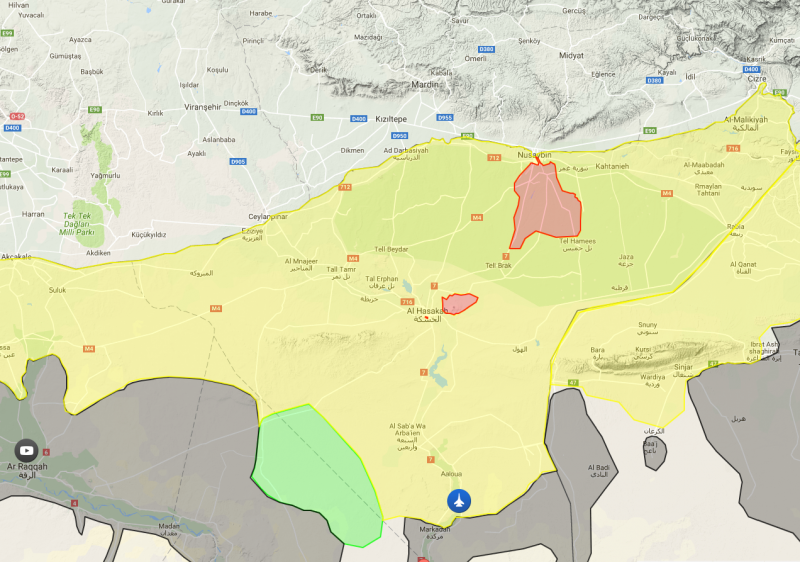 Navy Capt. Jeff Davis, a Pentagon spokesman, did not dispute that U.S. troops are operating with elements of the Syrian Democratic Forces (SDF) along the Turkish border, but he would not get into specifics. The SDF is a Kurdish-dominated alliance fighting IS that includes Arab fighters.

“We have U.S. forces that are there throughout the entirety of northern Syria that operate with our Syrian Democratic Force partners,” Davis said. “The border is among the areas where they operate.” He said the U.S. wants the SDF to focus on liberating the IS-held town of Tabqa and the extremist group’s de facto capital, Raqqa, “and not be drawn into conflicts elsewhere.”

Rami Abdurrahman, director of the Britain-based Syrian Observatory for Human Rights, said the deployment seems limited and is aimed to “prevent fighting” between the two sides.

The U.S. has recently shifted from working quietly behind the scenes in Syria’s conflict toward overt displays of U.S. force in an attempt to shape the fight.

Last month, about 200 Marines rolled into northern Syria backed with howitzers, significantly widening America’s footprint in a highly toxic battlefield. The Marines’ deployment came days after another intervention, when dozens of army troops drove outside the town of Manbij, riding Stryker armored vehicles, following an earlier conflagration of fighting between Syrian Kurdish troops and Turkish troops. The U.S. deployment in Manbij intentionally put Americans in the middle of that rivalry, hoping to cool it down.

The SDF retook Manbij from IS control, and Turkey — with its troops nearby — said it won’t allow the town to be under Kurdish control, threatening to move on it. The American presence appears intended to reassure Ankara the Kurds don’t hold the town.

But the new deployment puts U.S. troops directly along the border with Turkey, another flashpoint, and immerses Washington into that increasingly hot fight.

Separately, the chief of the international chemical weapons watchdog said on Friday that he has a team of experts ready and willing to travel to the site of this month’s deadly nerve gas incident in Syria if their safety can be assured.

“We are willing to go to Khan Sheikhoun and we have undertaken some actions,” Ahmet Uzumcu of the Organization for the Prohibition of Chemical Weapons told a small group of reporters in The Hague.

Syrian ally Russia has called for an international investigation into the April 4 attack that killed nearly 90 people. Kremlin spokesman Dmitry Peskov this week expressed regret that the OPCW turned down the Syrian government’s offers to visit the site of the attack and investigate. Russia has rejected Western accusations that Syrian President Bashar Assad’s government was behind the attack.

Uzumcu said that the area of the town of Khan Sheikhoun where the incident happened is controlled by opposition rebels, adding that the watchdog experts will “need to strike some deals with them,” such as a temporary ceasefire, to assure the team’s safety before it can deploy.

The OPCW has been extremely cautious about sending investigators to Syria since a team of its experts came under attack there in 2014. Uzumcu said the organization is in daily contact with U.N. authorities over the security situation in Syria.

The Syrian president has categorically rejected accusations that his forces were behind the attack.

Uzumcu is not yet calling the April 4 incident a chemical weapons attack, but he has said that tests by his organization have established beyond doubt that sarin or a similar toxin was used.

Other nations, however, have already labelled it an attack and blamed the Syrian government.

French Foreign Minister Jean-Marc Ayrault said earlier this week that the attack “bears the signature” of Assad’s government and shows it was responsible.

Uzumcu said his organization is not yet in a position to confirm the French findings.

The OPCW’s team is already gathering evidence from victims and survivors and testing samples outside Syria. Uzumcu said he expects an initial report to be issued in about 10 days. The initial OPCW investigation will not apportion blame — that is left to a separate investigative mechanism made up of OPCW and U.N. experts.