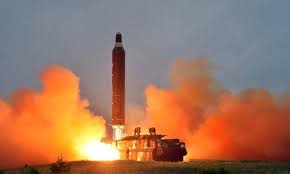 The officials said that the failed test involved a short-range, non-nuclear missile, which would be able to hit Seoul, but not Japan.

One official told NBC that the U.S. had warning of the test and watched it closely.

A South Korean military official confirmed to NBC that the test occurred around 5:30 a.m. local time. The official said the missile traveled northeast towards the East Sea.

“Currently, we are closely monitoring North Korea’s further military provocation and are totally ready to meet any and all kinds of provocation,” the official told NBC.

U.S. Pacific Command said the missile did not leave North Korean territory, adding that the North American Aerospace Defense Command determined the launch did not pose a threat to North America.

Pacific Command said it “stands behind our steadfast commitment to the security of our allies in the Republic of Korea and Japan.”

The White House said that the administration is aware of the test and that President Donald Trump has been briefed.

North Korea disrespected the wishes of China & its highly respected President when it launched, though unsuccessfully, a missile today. Bad!

Saturday’s missile test comes as the United States reconsiders its strategy in dealing with the isolated nation.

In an interview with Reuters published late Thursday, Trump said “major, major” conflict with North Korea is possible, but that he would prefer a diplomatic solution.

Trump also told Reuters that he wants South Korea to pay for the $1 billion missile defense system. The system, the Terminal High Altitude Area Defense (THAAD), is designed to protect South Korea and Japan from missile attack, and it could be operational as soon as summer 2017.

House Majority Leader Rep. Kevin McCarthy said on Thursday that the chamber would hold a vote on sanctions next week, which he said would target North Korea’s shipping industry and “those who employ North Korean slave labor abroad.”