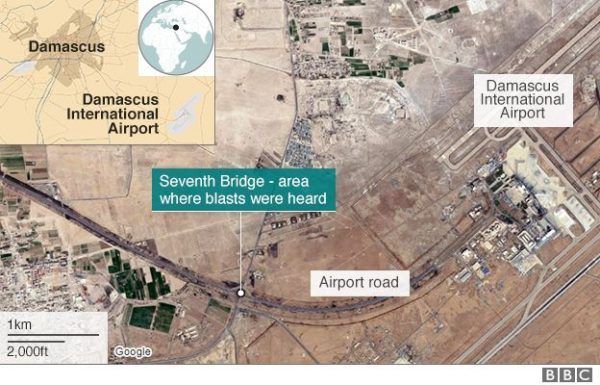 An Israeli missile strike has caused a large explosion and fire at a military site near Damascus international airport, Syrian state media report.

A fuel tank and warehouses were damaged, the Sana news agency said.

But Syrian rebel sources said an arms depot run by Lebanon’s Hezbollah movement, which is fighting in Syria as an ally of the government, was hit.

Israel said the explosion was “consistent” with its policy to prevent Iran smuggling weapons to Hezbollah.

But it stopped short of confirming it was responsible.

Israel regards Hezbollah, and its key backer Iran, as its biggest threat. It went to war with Hezbollah in 2006 and the group has grown considerably more powerful since then.

The Syrian Observatory for Human Rights, a UK-based monitoring group, reported that the powerful blast was heard across the capital at dawn on Thursday and that it was believed to have happened near the main road that leads to the airport.

Sana said several missiles had been fired at a military site south-west of the airport, causing explosions that resulted in some material losses.

Pro-government Al-Mayadeen TV cited sources as saying that missiles had been fired by Israeli jets flying inside the Israeli-occupied Golan Heights.

Two senior rebel sources based in Damascus told Reuters news agency that the missiles had hit an ammunition depot in a closed military area that was used by Iran-backed militias operating alongside the Syrian army, led by Hezbollah.

Appearing to confirm Israeli involvement, Intelligence Minister Israel Katz told Israeli Army Radio: “I can confirm that the incident in Syria corresponds completely with Israel’s policy to act to prevent Iran’s smuggling of advanced weapons via Syria to Hezbollah in Iran. Naturally, I don’t want to elaborate on this.”

“The prime minister has said that whenever we receive intelligence that indicated an intention to transfer advanced weapons to Hezbollah, we will act.”

The Israeli military declined to comment on the reports.

Israel is thought to have bombed arms shipments intended for Hezbollah several times since the Syrian conflict began.

In a rare step last month, the Israeli military confirmed that its jets had struck several targets inside Syria in a raid that prompted the Syrian military to fire a number of ground-to-air missiles, one of which was intercepted over Israeli territory.

On Wednesday, a high-ranking Israeli military officer briefed reporters that approximately 100 missiles intended for Hezbollah had been destroyed in the raid.

In the wake of the US cruise missile attack on a Syrian air base at the start of this month, there was a lot of talk about Russia and Syria strengthening their air defences and the likely implications of this for Israel.

Would it hamper the Israeli Air Force’s freedom of action in the skies over Syria, where it has been conducting an intermittent air campaign to prevent sophisticated weapons transfers to the Lebanese Shia militia group Hezbollah?

Well, Thursday’s attack near Damascus airport seems to provide an answer. Israel – which is widely seen as being behind the strike – clearly intends to continue its campaign against Hezbollah weapons shipments and one must assume that it has a tacit understanding with Moscow.

Sophisticated Russian air defences cover much of Syrian airspace and have a more than adequate capability to interfere with Israeli attacks if Moscow so wished.