US “deeply concerned” after Turkish warplanes bombed its Kurdish allies in Iraq, Syria 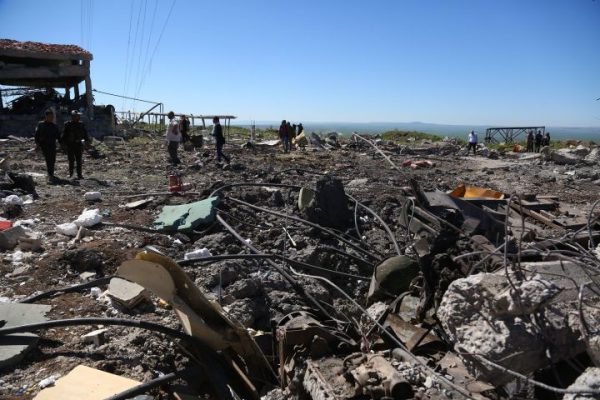 Fighters from the Kurdish People’s Protection Units (YPG) visit the site of Turkish airstrikes near northeastern Syrian Kurdish town of Derik, known as al-Malikiyah in Arabic, on April 25, 2017. Turkish warplanes killed more than 20 Kurdish fighters in strikes in Syria and Iraq, where the Kurds are key players in the battle against the Islamic State group. The bombardment near the city of Al-Malikiyah in northeastern Syria saw Turkish planes carry out “dozens of simultaneous air strikes” on YPG positions overnight, including a media centre, the Syrian Observatory for Human Rights said. / AFP PHOTO / DELIL SOULEIMAN (Photo credit should read DELIL SOULEIMAN/AFP/Getty Images)
Share:

Turkish warplanes bombed Kurdish fighters in Iraq and Syria on Tuesday in an unusually intense operation that presented a new complication for the United States’ military campaign against the Islamic State.

The Turkish military’s targets included the Y.P.G., a Kurdish militia that has played an important role in the American-backed operations in Syria against the Islamic State, also known as ISIS or ISIL.

Adding to the tensions in the region, Kurdish officials said one Turkish airstrike had mistakenly struck Kurdish pesh merga troops on Mount Sinjar in northwestern Iraq, killing at least five and wounding more, some critically.

The pesh merga in Iraq’s autonomous region carried out the opening attacks in the offensive to retake Mosul from the Islamic State, and they have been an American ally in operations against the militants.

American officials said Turkey had informed the United States less than an hour in advance that it intended to carry out the bombing raids in the crowded airspace over northern Syria and Iraq. American officials said that they had asked Turkey not to proceed without proper coordination, but that the request was ignored.

Mark Toner, a State Department spokesman, said the United States was “deeply concerned” about the Turkish airstrikes, which were “not approved” by the United States-led coalition that is fighting the Islamic State.

“It was a surprise,” Masrour Barzani, a top Kurdish security official in the Iraqi autonomous region, said of the Turkish attack on Mount Sinjar. “This was the first time they have been bombing there. They had been mostly bombing border areas.”

“We asked for some clarification but have not received any answers yet,” he said in an interview. “I hope on the Turkish side it was a mistake.”

Iraq’s Foreign Ministry denounced the attacks in the Sinjar area as a violation of the country’s sovereignty.

The Turkish strikes pointed to continuing and deep tensions between the United States and Turkey over how to carry out the campaign against the Islamic State.

The United States and Turkey have been sharply at odds over the Y.P.G. militia. American military officials regard the group as an essential partner in the operation to isolate and retake Raqqa, Syria, the Islamic State’s self-proclaimed capital, and they want to arm its fighters for that mission.

Lt. Gen. Stephen J. Townsend, who commands the American-led task force that is fighting the Islamic State in Iraq and Syria, told reporters during a February trip to Syria that Turkey had no reason to fear the Y.P.G. or the umbrella group it is a crucial part of, the Syrian Democratic Forces.

“The Turkish government is not really crazy that we are operating with the Syrian Democratic Forces, mostly because of their Kurdish and Y.P.G. components,” General Townsend said. But the Kurdish fighters “tell us they are not a threat to Turkey, and I believe that,” he added.

The Turkish government, however, insists that the Y.P.G. is closely linked to the Kurdistan Workers’ Party, a separatist group known as the P.K.K. That group is listed by Turkey, the United States and Europe as a terrorist organization.

American officials had hoped that Turkey would soften its stance after President Recep Tayyip Erdogan won a referendum this month that greatly increased his executive powers, a victory that brought a congratulatory phone call from President Trump. But any hope that Mr. Erdogan’s position might reflect posturing before the vote appeared to vanish with the airstrikes.

The Turkish military said in a statement that it had struck “terror nests” in northeast Syria and northwest Iraq that Kurdish separatists were using to send weapons and plan attacks inside Turkey. “The designated targets were hit,” said the statement, which asserted that the bombing raids were “based on international law.”

The division between Turkey and the United States was only highlighted when the Kurdish news media posted photographs of a United States military officer, in the company of Y.P.G. leaders, visiting the site in Syria that was bombed. Mr. Erdogan is scheduled to meet with Mr. Trump in Washington next month.

A statement issued by Ridor Kahlil, a spokesman for the Y.P.G., said 20 fighters were killed in the Turkish airstrikes. The Syrian Observatory for Human Rights, a monitoring group, said the targets included a radio station east of Hasaka owned by the Y.P.G.

The Turkish airstrikes on Mount Sinjar began around 2 a.m. and lasted about an hour, Capt. Falah Abu Zeid, an officer with the Iraqi Kurdish pesh merga, said in a telephone interview. The bombing, he added, struck four Y.P.G. and P.K.K. headquarters in the area.

“If there were any fighters in those headquarters, it would have been impossible for them to survive because of the force of the shelling,” he said.

But one of the missiles, he added, struck communications towers near a pesh merga headquarters, killing and wounding pesh merga fighters.

The Kurdish autonomous government in Iraq has long had an acrimonious relationship with the Y.P.G. and P.K.K., which, like Turkey, it regards as one and the same. The pesh merga offensive to retake Sinjar from the Islamic State in 2015 was delayed by tensions between the pesh merga and the P.K.K., who competed to take the lead in the battle. And it was noteworthy that Mr. Barzani, the Kurdish security official, did not call on Turkey to cease its airstrikes in Iraq but instead pointed the finger of blame at the P.K.K.