Protesters across the US demand to see Trump’s tax returns 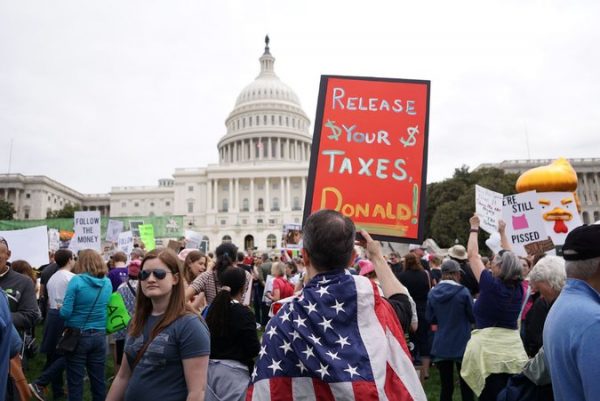 Protesters on April 16, 2017 in Washington called on president Trump to release his tax records. Credit Mandel Ngan/Agence France-Presse — Getty Images
Share:
In a Tax Day groundswell of calls for President Trump to release his tax returns, hundreds of protesters marched to Mr. Trump’s Mar-a-Lago getaway on Saturday in Florida, and thousands more gathered in Washington and other cities across the country.

On a waterfront patch facing Mr. Trump’s resort, where he is spending the weekend, demonstrators chanted “Pay! Your! Taxes!” and held signs calling him “Chicken in Chief” — the chicken being a symbol at the rallies of how Mr. Trump was “scared” to follow decades of presidential practice in releasing the returns.

“This is the closest we have come to making sure he sees us and hears us,” said Debbie Wehking, 66, a school principal from Miami. “He needs to show us his tax returns so that we can tell who’s influencing his decisions, who he owes money to, who he’s doing business with — really so we can figure out whether he needs to be impeached.”

Mr. Trump avoided the protest, taking a more circuitous route in his motorcade as he returned from a morning outing to his golf club in West Palm Beach. But while the president was spared the sight of chanting, sign-waving crowds, the demonstrations were heard around the country, in some cases snaking past properties bearing the Trump name.

In Washington, several thousand people who had gathered at the foot of the Capitol — many holding replicas of chickens with golden pompadours — marched through the streets, passing the Trump International Hotel near the White House.

“70% want to see your taxes — that’s bigly!” one sign read. It was a reference to the lopsided majorities that polls show want the president to release his returns, as presidents have done for the past 40 years, though they are not required to.

Another said, “My taxes pay for your golf.”

The White House has said Mr. Trump cannot release his tax returns because he is under audit by the Internal Revenue Service. But the tax returns of presidents and vice presidents are automatically audited every year, a circumstance that has not prevented every other president since Richard M. Nixon from making public at least a portion of his tax records.

Government transparency groups and Democrats have said that Mr. Trump has a particular duty to make the returns public, given the potential conflicts presented by his vast business holdings and his push to rewrite the tax code. One government ethics group has sued the president, arguing that his hotel profits violate the Emoluments Clause of the Constitution, which prohibits federal officials from receiving “any present, emolument, office or title of any kind whatever from any king, prince or foreign state.”

“How can we determine his conflicts of interest or stop him from receiving payments from foreign governments if he won’t show us the names of the people and corporations that he is in active partnership with all over the world?” said Representative Jamie Raskin, Democrat of Maryland, who appeared at the Washington rally.

Kris Gillespie of New York, who traveled to Washington with his wife and two children to attend the march, said the family made the trip in part to help the couple’s 12-year-old son, James, cope with the stress he has felt since Mr. Trump’s election.

“We thought maybe if we bring him to something like this, it could help him process what he’s feeling,” said Mr. Gillespie, whose wife, Julie Underwood, traveled to Washington for the Women’s March the day after Mr. Trump was inaugurated. The tax rally had been billed as among the largest demonstrations since that march, though the crowds on Saturday were far smaller. Another protest, called the March for Science, will be held next weekend.

The tax protests unfolded a day after the White House announced that it would end the practice of releasing White House visitor logs, reversing a move toward greater transparency begun under President Barack Obama.

“Why does he want to hide his taxes, that’s what I want to know,” said Martha Marquez, 53, a graduate school professor who attended the Palm Beach march holding a sign that said “Show Me Yours and I’ll Show You Mine.” “He promised transparency; remember ‘Drain the swamp?’”

Ms. Wehking, the Miami principal, who traveled in January to Washington for the Women’s March, held a sign that read “We Care! Show Us Your Taxes!” It was a reference to remarks by Kellyanne Conway, counselor to the president, who said in January that Mr. Trump would not release his tax returns because the public was not concerned with them.

Jim Gnehm, 72, of Jupiter, Fla., said, “He works for us — he represents the country, and there’s just no excuse for him breaking the precedent that presidents have followed for the last 40 some-odd years.”

Intermingled among the protesters were a handful of ardent supporters of the president, who came with their own signs praising him and wishing him well.

“I think he’s doing a great job, and I couldn’t care less about his tax returns,” said Valeria Bianco, 59, a business consultant from Lauderdale-by-the-Sea, Fla., who had a sign wishing the first family a happy Easter. “People should stop worrying about what he’s hiding and focus on what he’s doing now to keep us safe, the brave and valiant message he sent to Assad, the jobs that he’s bringing back.”

In Berkeley, Calif., the police arrested at least 13 people at a pro-Trump “Free Speech” rally that devolved into violence as the president’s supporters and counterprotesters clashed. The rally had been organized by a group called the Liberty Revival Alliance, and drew support from the Oath Keepers, a far-right group of former and current military members, as well as biker groups.

Video of the protests, which circulated widely on social media, showed repeated skirmishes between Trump supporters and protesters.