China behind the technology and hardware of North Korea’s rockets! 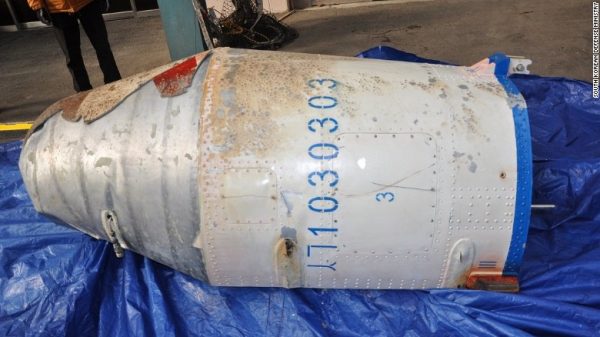 Section of the booster of the north Korean rocket that was found by south Korea. Many key components were foreign-made, acquired from businesses based in China.
Share:

When North Korea launched its Kwangmyongsong-4 satellite into space last February, officials heralded the event as a birthday gift for dead leader Kim Jong Il. But the day also brought an unexpected prize for the country’s adversaries: priceless intelligence in the form of rocket parts that fell into the Yellow Sea.

Entire sections of booster rocket were snagged by South Korea’s navy and then scrutinized by international weapons experts for clues about the state of North Korea’s missile program. Along with motor parts and wiring, investigators discerned a pattern. Many key components were foreign-made, acquired from businesses based in China.

The trove “demonstrates the continuing critical importance of high-end, foreign-sourced components” in building the missiles North Korea uses to threaten its neighbors, a U.N. expert team concluded in a report released last month. When U.N. officials contacted the implicated Chinese firms to ask about the parts, the report said, they received only silence.

China’s complex relationship with North Korea was a key topic during last week’s U.S. visit by President Xi Jinping, as Trump administration officials urged Chinese counterparts to apply more pressure on Pyongyang to halt its work on nuclear weapons and long-range delivery systems. Yet, despite China’s public efforts to rein in North Korea’s provocative behavior, Chinese companies continue to act as enablers, supplying the isolated communist regime with technology and hardware that allow its missiles to take flight, according to current and former U.S. and U.N. officials and independent weapons experts.

The private assistance has included sensitive software and other items specifically banned for export to North Korea under U.N. Security Council sanctions, the officials and experts said.

China has officially denied that such illegal exports exist, but investigations show restricted products were shipped privately to North Korea as recently as 18 months ago. Still unclear, analysts said, is whether the Chinese government tacitly approved of the exports, or is simply unable or unwilling to police the thousands of Chinese companies that account for more than 80 percent of all foreign goods imported by North Korea each year.

“There’s all kinds of slack in the system,” said Joshua Pollack, a former consultant to U.S. government agencies on arms control and a senior research associate with the James Martin Center for Nonproliferation Studies. “It could be that the Chinese don’t care enough to do much about it. A second possibility it that they don’t have the systems — such as strong export controls — in place. Or that it’s just corruption.”

Whatever the reason, experts say, the flow of products through China has allowed North Korea’s missiles engineers to achieve progress that would otherwise be difficult for an impoverished regime that is cut off from the West and lacks a sophisticated microelectronics industry.

When confronted privately about such exports, Chinese officials have typically demanded high levels of proof — specific names and dates that can be difficult to derive from water-damaged rocket parts pulled from the ocean, said an Obama administration nonproliferation official involved in sensitive negotiations with China over its relations with North Korea.

“They’d say, ‘give us details,’ but in most cases we could never say it was ‘this precise person on this precise day,’” said the official, who insisted on anonymity in describing diplomatic negotiations. “With them, it was never a team sport. It was always just the bare minimum of what they had to do in order to avoid having to take serious action.”

The Unha-3, the rocket that launched North Korea’s Kwangmyongsong-4 satellite into orbit on Feb. 7, 2016, was among the most powerful ever built by Kim Jong Un’s government. It is also the most worrisome. U.S. and South Korean intelligence officials have long believed that the three-stage, 100-foot-tall rocket was designed as a forerunner for a future nuclear-tipped space vehicle that could allow North Korea to threaten cities as far away as Washington.

Mindful that spy agencies would seek to recover spent parts after the launch, North Korean engineers laced the rocket with explosives so that each stage would self-destruct while hurtling back to Earth. Still, South Korean navy ships were waiting to scoop up any parts that survived, eventually harvesting enough components to allow a crude reconstruction of the entire rocket.

Investigators determined that the Unha-3’s frame was indigenously made. But inside the rocket’s shell was an array of electronics, including specialized pressure sensors, transmitters and circuitry. An extensive probe by U.S. and South Korean officials revealed that many of the components had been manufactured in Western countries and shipped to North Korea by Chinese distributors — a finding that was echoed in the United Nations Panel of Experts report made public on March 9.

The report, which received scant attention outside the world body, described elaborate systems for disguising technology exports intended for North Korea. Some schemes involved Chinese front-companies created by North Korean intelligence agencies; others were run through banks created as joint ventures by Pyongyang and foreign partners, including Chinese financial institutions. As sanctions grew tougher, the sanction-busters simply learned new tricks for getting around the rules, the panel’s investigators found.

“The Democratic People’s Republic of Korea is flouting sanctions through trade in prohibited goods, with evasion techniques that are increasing in scale, scope and sophistication,” the eight-member panel concluded. International resolve for approving new sanctions had “not yet been matched,” the report said, “by the requisite political will, prioritization and resource allocation to ensure effective implementation.”

Some of the banned components exported to North Korea can’t be found inside a missile frame. A separate report by U.S. weapons experts reveals how Pyongyang used Chinese middlemen to obtain access to European-made software essential for making parts that go inside advanced rockets.

The report recounts a 2015 business deal in which a European manufacturer agreed to sell sensitive software and industrial-control systems to a Chinese company based in the northeastern Chinese city of Shenyang, about 150 miles from the North Korean border. The deal that came with an important condition: None of the items were to be resold to North Korea.

The agreement was quickly broken, according to the report by the Institute for Science and International Security, a Washington nonprofit that focuses on nuclear-weapons proliferation. The purchaser, a manufacturing giant in northeastern China known as the Shenyang Machine Tool Co. Ltd., integrated the European technology in its own line of industrial milling machines used to make metal parts. Two of those machines were then sold to North Korea, the report said. While North Korea’s eventual use of the machines is not known, the controllers and software are used elsewhere to manufacture parts for missiles as well as centrifuges used to make enriched uranium.

“These goods were supplied to Shenyang Machine Tools under the condition that they would not be retransferred to North Korea or other sanctioned states,” said the report, set to be released this week. European officials “decided to investigate the responsible individuals in the Shenyang company but this effort failed,” the document said. Shenyang officials would later claim that the transfer of sensitive technology had been inadvertent, the report said.

David Albright, author of the report and a former U.N. weapons inspector, declined to identify the European manufacturer or the government that conducted the investigation, citing confidentiality agreements. The Shenyang firm did not respond to emailed requests from The Washington Post seeking comment.

Albright, the author of dozens of technical studies on North Korea’s weapons programs, noted that China has made a show of prosecuting other businesses that violate sanctions on trading with North Korea. But he said the Shenyang case illustrates that illicit trade continues, often under complex schemes that are difficult even for Chinese authorities to spot.

But he argued that the Chinese could do much more.

“It’s a question of priorities,” said Albright, who has discussed such cases with Chinese officials. “China is an export economy and money is never a dirty word, ever. There are good people in the system who would like to do more, but as you work your way down through the bureaucracy, the interest goes way down.”

There are signs that Beijing is beginning to tighten the screws. In September, Chinese authorities arrested at least 11 business executives in the border city of Dandong for allegedly selling banned goods to North Korea. Among those arrested was Ma Xiaohong, the 44-year-old founder and chairwoman of Hongxiang Group, a company accused by U.S. officials of supplying Pyongyang with rare metals and chemicals used in nuclear-weapons production. China also recently curtailed coal imports from North Korea and imposed unilateral sanctions intended to pressure Kim Jong Un into halting further nuclear tests.

In public comments after the Ma arrest, Chinese Foreign Ministry spokesman Lu Kang said his country would be “relentless” in enforcing sanctions aimed at ridding the Korean Peninsula of nuclear weapons.

“These efforts are there for all to see,” Lu said.

The same message has been delivered privately as part of a pressure campaign that dates at least to the early years of the Obama administration. In meetings, U.S. officials have warned that a failure to halt the illicit trade could speed up Kim Jong Un’s nuclear timetable and increase the risk of a regional war — one that could devastate regional economies and send waves of refugees streaming across China’s border — an outcome Chinese leaders are particularly anxious to avoid, according to a recently retired U.S. diplomat and veteran of numerous rounds of such talks.

“China may be willing to close its eyes to some things,” the diplomat said, “but they’re not prepared to welcome North Korea as a nuclear-weapons state.”