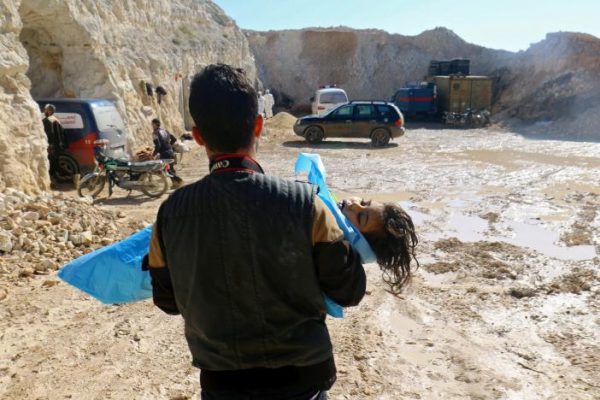 A man carries the body of a dead child, after what rescue workers described as a suspected gas attack in the town of Khan Sheikhoun in rebel-held Idlib, Syria April 4, 2017. REUTERS/Ammar Abdullah
Share:

The White House accused Russia on Tuesday of engaging in a cover-up of the Syrian government’s role in a chemical weapons attack last week, saying that United States intelligence had confirmed that the Assad regime used sarin gas on its own people.

A four-page report drawn up by the National Security Council contains declassified United States intelligence on the attack and a rebuttal of Moscow’s claim that insurgents unleashed the gas to frame the Syrian government. Instead, the White House asserted that Damascus and Moscow had released “false narratives” to mislead the world.

The document also urges international condemnation of Syria’s use of chemical weapons and harshly criticizes Russia for “shielding” an ally that has used weapons of mass destruction.

The release of the dossier at a White House briefing on Tuesday marked a striking shift by President Trump, who entered office praising President Vladimir V. Putin of Russia but now appears bent on pressuring him. The accusations came as Rex W. Tillerson, the secretary of state, was preparing for meetings in Moscow on Wednesday, and as Congress and the F.B.I. are investigating potential ties between Mr. Trump’s campaign and Russia. “It’s no question that Russia is isolated,” said Sean Spicer, the White House press secretary. He said only Moscow and what he described as the “failed states” of Syria, North Korea and Iran disputed Damascus’s responsibility.

“This is not exactly a happy-time cocktail party of people you want to be associated with,” Mr. Spicer added. His choice of language in criticizing the Syrian government set off an intense backlash, after he suggested that President Bashar al-Assad was worse than Hitler — without acknowledging that Hitler gassed his own people during the Holocaust.

At the Kremlin on Tuesday, Mr. Putin spoke emphatically against the American accusations, saying he would request a formal examination by the United Nations and the international community and trying to cast doubt on the Trump administration’s conclusions. Mr. Putin compared the White House’s arguments to the erroneous intelligence findings on weapons of mass destruction that drew the United States into war with Iraq in 2003.

“To my mind, this strongly resembles what happened in 2003 when representatives of the United States showed in the Security Council what was supposed to be chemical weapons found in Iraq,” Mr. Putin said after a meeting with President Sergio Mattarella of Italy. Using an acronym for the Islamic State, he added, “A military campaign in Iraq ensued, and it ended in devastation of the country, growth of the terror threat and emergence of ISIL on the international scene.”

Mr. Trump on Tuesday defended the missile strikes after the chemical attack, even as he declared that United States involvement in Syria would be limited.

“We’re not going into Syria,” Mr. Trump said in an interview with Fox News. “What I did should have been done by the Obama administration a long time before I did it, and you would have had a much better — I think Syria would have been a lot better off right now than it has been.”

That was a stark reversal from his position in 2013, when Mr. Trump implored President Barack Obama not to attack Syria, arguing there was “no upside and tremendous downside.”

Senior White House officials, speaking on the condition of anonymity to discuss the declassified intelligence report, said Russia’s goal was to cover up the Syrian government’s culpability for the chemical attack. They asserted that the Syrian government, under pressure from opposition forces around the country and lacking enough troops to respond, used the lethal nerve agent sarin to target rebels who were threatening government-held territory.

During his daily White House news briefing, Mr. Spicer would not comment on the possibility that the Russian government had known in advance of Syria’s plan to carry out the chemical attack, or to launch a subsequent assault on a hospital that was treating victims.

“There’s no consensus within the intelligence community that there was involvement” by Russia, Mr. Spicer said.

But later on Tuesday, Nikki R. Haley, the United States ambassador to the United Nations, said she believed that the Russians had foreknowledge of the chemical attack.

“I think that they knew,” Ms. Haley told CNN in an interview.

Officials also noted that Russia, which brokered the 2013 agreement by which Syria agreed to surrender its chemical weapons, has repeatedly rejected evidence that Mr. Assad’s regime is still using them.

“Moscow’s response to the April 4 attack follows a familiar pattern of its responses to other egregious actions,” the report said. “It spins out multiple, conflicting accounts in order to create confusion and sow doubt within the international community.”

The tense back-and-forth between Washington and Moscow unfolded as Mr. Tillerson, in Italy on Tuesday, said that Mr. Assad’s reign in Syria was “coming to an end,” and warned that Russia was at risk of rendering itself irrelevant in the Middle East by continuing to support him.

He said Russia was either incompetent or inattentive in its failure to secure and destroy Mr. Assad’s chemical weapons stockpiles. “But this distinction doesn’t much matter to the dead,” Mr. Tillerson said. “We can’t let this happen again.”

At the Pentagon, several officials said the presence of Russian personnel at the Al Shayrat airfield, used to launch the chemical strike, points to at least a possibility that Russia knew about the chemical attack. But Defense Secretary Jim Mattis on Tuesday refused to make that direct accusation.

“It was very clear that the Assad regime planned it, orchestrated it and executed it,” Mr. Mattis said at a news conference, when asked whether Russia was involved. “We know what I’ve just told you. We don’t know anything beyond that.”

Mr. Mattis also declined to confirm reports that a Russian drone was flying over a hospital treating victims of the chemical attack last week, in advance of the hospital being bombed. While several United States officials have suggested privately that the hospital was targeted in an effort to hide evidence of the chemical attack, Mr. Mattis appeared to be taking pains at Tuesday’s news conference to point his finger solely at Syria, at least for now.

“We have gone back through and looked at all the evidence,” Mr. Mattis said. “It is very clear who planned the attack, who authorized it and who executed it. There is no doubt at all.”

The Trump administration’s dossier appeared to suggest a broader effort to generate international consensus for a forceful response to the Syrian government’s actions. White House officials said they were eagerly awaiting action by the United Nations and the results of a fact-finding mission by the Organization for the Prohibition of Chemical Weapons, the international body charged with enforcing the global chemical weapons ban.

Britain, France and the United States are pushing for a vote as early as Wednesday on a draft United Nations Security Council resolution that would condemn the use of chemical attacks and remind the Syrian government to cooperate with international investigators. A verbal confrontation with Russia is likely, and possibly a veto.

Much of the White House report was devoted to rebutting Russia’s claim that the chemical attack last week, which it said killed as many as 100 people, including “many children,” was actually the result of a Syrian airstrike against a terrorist depot in the town of Khan Sheikhoun that contained chemical weapons. The report cited a video and commercial satellite imagery that showed that the chemical weapon had landed in the middle of a road, not at a weapons facility.

White House officials also said American intelligence agencies did not believe that the Islamic State or other terrorist groups had sarin gas.

The report also rejected Moscow’s claim that the attack was a “prank of a provocative nature” and denied Russian suggestions that the substance used might not have been sarin.

“Victims of the attack on April 4 displayed telltale symptoms of nerve agent exposure, including pinpoint pupils, foaming at the nose and mouth, and twitching,” the report said.

On Tuesday, Mr. Putin repeated his claim that opposition forces had essentially tried to frame the Syrian government by placing chemical weapons in civilian areas and blaming Mr. Assad’s forces.

“We have information from various sources that similar provocations — and I have no other word for that — are being prepared in other regions of Syria, including southern suburbs of Damascus, where they intend to plant certain substance again and accuse official Syrian authorities of using it,” Mr. Putin said

In seeking to rebut Russia’s claim, the report went into detail about the carnage last week. It said social media reports placed the start of the attack at 6:55 a.m. in Khan Sheikhoun, in Idlib Province. The United States’ assessment is that Su-22 bombers took off from the Al Shayrat airfield and delivered the chemical agent. It also asserts that “personnel historically associated with Syria’s chemical weapons program” had been at the airfield in late March preparing for an attack, and on the day it was carried out.

But White House officials said antigovernment forces could not have fabricated the volume of evidence that points to the Assad regime’s responsibility.