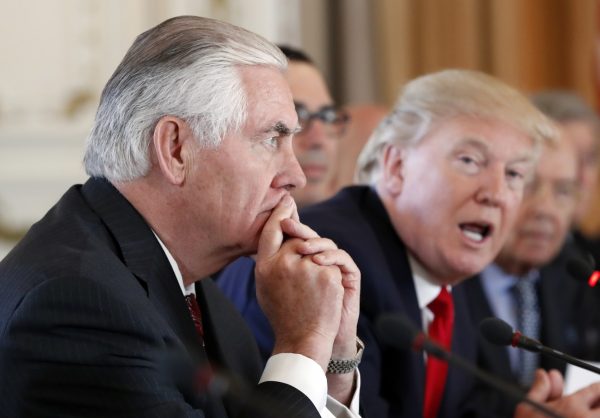 Officials in the Trump administration on Sunday demanded that Russia stop supporting the Syrian government or face a further deterioration in its relations with the United States.

Signaling the focus of talks that Secretary of State Rex Tillerson is set to have in Moscow this week, officials said that Russia, in propping up Syrian President Bashar al-Assad, bears at least partial responsibility for Wednesday’s chemical attack on villagers in Idlib province.

“I hope Russia is thinking carefully about its continued alliance with Bashar al-Assad, because every time one of these horrific attacks occurs, it draws Russia closer into some level of responsibility,” Tillerson said on ABC’s “This Week.”

Although officials acknowledged that they have seen no evidence directly linking Russia to the attacks, national security adviser H.R. McMaster said that Russia should be pressed to answer what it knew ahead of the chemical attack since it has positioned warplanes and air defense systems with associated troops in Syria since 2015.

“I think what we should do is ask Russia, how could it be, if you have advisers at that airfield, that you didn’t know that the Syrian air force was preparing and executing a mass murder attack with chemical weapons?” McMaster said on Fox News.

The timing of the comments, with Tillerson heading soon to Moscow, signaled the administration’s intent to pressure Russia to step away from Assad, who is supported by the Kremlin with military aid and diplomatic cover.

The fallout from the Syrian regime’s use of chemical weapons against civilians, plus the U.S. missile strike that came in retaliation for it, adds strain to a rocky relationship that is at its lowest point in decades. A host of issues are responsible, topped by Russian interference in the U.S. presidential election and Moscow’s support for separatists in Ukraine, and have prompted U.S. and European sanctions. These topics have now been overshadowed by last week’s missile strike.

The Russians had hoped that relations with the United States might improve under President Trump, who expressed admiration for Russian President Vladimir Putin during the campaign. Tillerson’s nomination and ­confirmation as secretary of state also raised prospects. given the former ExxonMobil executive’s experience negotiating a major deal with Rosneft, the state-controlled oil giant.

But 11 weeks into Trump’s presidency, expectations have been substantially lowered.

“This is a big cold shower,” said Samuel Charap, a Russia analyst with the Rand Corp. “Even if behind closed doors they might engage on other issues in a more pragmatic manner, the public posture is going to be one of emphasizing how they disagree about [Syria]. Putin is not going to want to be seen as chummy with the U.S. secretary of state.”

On Sunday, both Tillerson and Nikki Haley, the U.S. ambassador to the United Nations, cast doubts on Assad’s legitimacy as Syria’s leader. Haley said that eventually the unrest in Syria cannot end if Assad remains in power.

“I think the issue of how Bashar al-Assad’s leadership is sustained, or how he departs, is something that we’ll be working [on] with allies and others in the coalition,” said Tillerson, who after weeks of keeping a low profile was making his debut on the Sunday morning talk shows. “But I think with each of those actions, he really undermines his own legitimacy.”

Neither suggested that Assad’s demise was imminent.

“Once the ISIS threat has been reduced or eliminated, I think we can turn our attention directly to stabilizing the situation in Syria,” Tillerson said on CBS’s “Face the Nation,” using an acronym to refer to the Islamic State militant group.

The U.S. missile strike in Syria carries the implicit threat of a larger U.S. role in the conflict. Tillerson said Sunday that the strike functioned as a warning to any country acting outside of international norms, in an apparent reference to North Korea.

“At least in the short run, it will further complicate efforts to improve the U.S.-Russia bilateral relationship, which seemed to be Tillerson’s objective in going to Moscow,” said Jeffrey Mankoff, a Russia analyst at the Center for Strategic and International Studies. “In the longer term, the threat of further U.S. intervention is a card that the U.S. can play to get the Russians to tighten the screws on Assad — on both the chemical weapons and possibly on accepting a political deal with the opposition.”

Tillerson departed around dawn Sunday for Italy to attend a meeting of the G-7 nations, a bloc of industrialized democracies. He is due to arrive late Tuesday in Russia for his first visit as secretary of state.
He and Russian Foreign Minister Sergei Lavrov are scheduled to meet, but it is not known if the secretary of state will also speak with Putin, who personally bestowed the Order of Friendship on Tillerson in 2012.

Michael McFaul, a former U.S. ambassador to Russia, said the Russians still hold out hope for a breakthrough, but that depends on whether Putin and Trump hit it off, not on anything Tillerson and Lavrov say.

“Things will only happen as a result of direct personal, sustained contact between Putin and Trump,” McFaul said. “That’s the way things work with Putin.”

But closer ties with Russia also carry political risks for Trump. Should the Trump administration ease sanctions ­imposed over Ukraine, for instance, critics would label it payback for Russia’s ­pre-election hacks targeting Democrats.

Several analysts said that Assad has humiliated Putin by using chemical weapons despite Russia’s guarantee that Syria’s stockpiles would be whisked away. Moscow’s interest in getting sanctions eased is greater than its loyalty to Assad. And that could provide maneuvering room for Tillerson.

That appears to be Tillerson’s calculation, too.

“I do not believe that the Russians want to have worsening relationships with the U.S.,” he said on ABC’s “This Week.” “But it’s going to take a lot of discussion and a lot of dialogue to better understand what is the relationship that Russia wishes to have with the U.S.”