Jordan’s King: Trump is committed to bringing the Israelis and Palestinians together 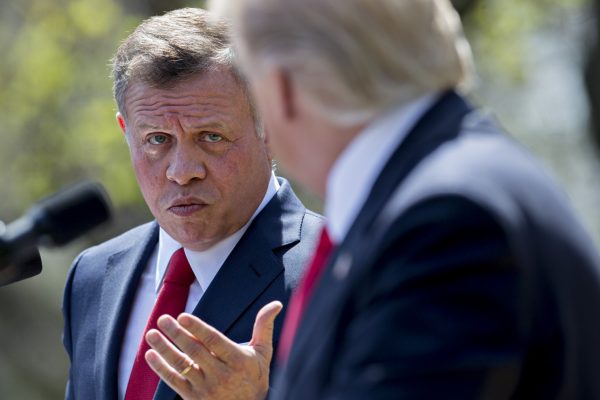 King Abdullah II of Jordan and President Trump held a news conference in the Rose Garden of the White House on Wednesday. (Andrew Harrer/Bloomberg)
Share:

Just before his first official White House meeting with President Trump on Wednesday, King Abdullah II of Jordan spoke to The Washington Post’s Lally Weymouth about the key role he expects to play with the president in reviving the stalled Israeli-Palestinian peace talks. He also talked about the need for the United States to engage with Russian President Vladi­mir Putin and perhaps make some concessions to solve the crisis in Syria. Excerpts follow:

Q. What would you like to come out of your meeting with President Trump?

A. The president, when I met him [in February], was very keen to solve the Israeli-Palestinian issue as quickly as possible. Now all of us have got to do the heavy lifting.

Q. When you met President Trump before, you told him that moving the U.S. Embassy from Tel Aviv to Jerusalem would be disastrous in the region ?

A. I was asked about this, and my response was there is going to be a fallout if it is not part of something more comprehensive. The president said, “Look, I am very keen to move the Israelis and Palestinians forward and to find a peace process that actually works, and let’s all work on this together.”

A. All I said was these issues do create animosity and difficulty — when I know that the priority of the president is to fight extremism and terrorism globally. These issues give ammunition to the Iranians, to [Islamic State leader Abu Bakr] al-Baghdadi and ISIS.

Q. Wasn’t it right after your conversation that Trump encouraged Israel to freeze settlements ?

A. I think people are giving me way too much credit. They are saying that I had something to do with it. I don’t know if I did. I just expressed my views.

Q. What do you think about the ban on immigration from certain Muslim countries that the administration is trying to impose?

A. I am not so much worried about foreign fighters coming into America, because you have a fairly robust system in place. . . . The danger is more the ideological battle. If Muslims in the Western community feel victimized, that is more dangerous, because lone-wolf attacks from homegrown terrorists are something we have seen recently in Britain and a couple of times in the United States.

Q. And you’ve had that in Jordan?

A. In 2016, for the first time, we captured and killed 40 ISIS terrorists in two major incidents. Ninety-six percent of them were of Palestinian origin. So if we don’t move the Israeli-Palestinian process forward, that is a major recruiting [opportunity] for disenfranchised and frustrated people.

Q. Do you engage with Israeli Prime Minister Benjamin Netanyahu?

A. I have been in contact with Netanyahu. . . . Egypt and Jordan have a special relationship with Israel, and so if we don’t move forward, it puts more pressure on the Jordanians and the Egyptians.

[The point of] my visit here — and the American administration agrees with me — is that we have got to put this all together. If there are settlements, how does this affect the peace process? I think the major challenge that we have is: Are we for a two-state solution? I don’t see any alternative but the two-state solution.

Q. How do you see the situation in Syria? Is Raqqa [which the Islamic State claims as its capital] about to fall? And if so, what happens next?

A. I think Raqqa will fall. I think things are going well in Syria and Iraq in defeating terrorism. The only problem is [militants] are going to move down towards us [in Jordan], which is a challenge, but we are ready for it in coordination with the U.S. and the British.

But they are also going elsewhere — you see them shift to Libya, and, as we succeed in Libya, they will move down into the Chad Basin, and that is going to strengthen Boko Haram. If Boko Haram is strengthened, then that is going to affect al-Shabab. Many members of the U.S. administration get that, and I think you are seeing a new strategy. We can’t just focus on Syria and Iraq. We have to focus internationally — wherever these people are, we have to take the fight to them.

Regarding the chemical attacks we saw in Syria this week, we have the moral obligation as members of the international community to fight this horrendous tragedy that is befalling civilians in Syria.

Q. But the attacks on civilians in Syria were most likely caused by President Bashar al-Assad.

A. Yes. We have to have a unified policy on what is acceptable and what is not.

Q. Does that include getting rid of President Assad?

A. Getting rid of Assad is a discussion for [future] Geneva [talks]. The Astana talks [backed by Russia, Iran and Turkey] that we’re involved in are purely related to getting a military cease-fire. We all know that the Russians want [Assad] there longer than the rest of us do, but I don’t think the Russians are wed to Assad. Common sense dictates that somebody who is the figurehead of such bloodshed towards his people probably will move on.

Q. So you think that at forthcoming Geneva talks, the Russians will get rid of Assad?

A. I think they will barter on how Assad exits. At the end of the day, we need a regime that is accepted by all Syrian people.

Q. Do you want to see the U.S. engage with Russia over Syria?

A. I’ll tell you why that works: From the Russian point of view, they play what I describe as a three-dimensional chess game. To them, Crimea is important, Syria is important, Ukraine, and we see them in Libya. The Americans and Europeans must deal with the Russians on all these issues simultaneously.

Q. Once you understand these issues together, what do you do?

A. Then you horse-trade. For the Russians I think the most important thing is Crimea. If you come to an understanding on Crimea, I think you will see much more flexibility on Syria, and I think Ukraine then becomes the least problematic.

From Putin’s point of view, he has a major challenge with terrorism. ISIS international is heading towards Moscow. I think [the subway attack in] St. Petersburg is the start of foreign fighters moving to another battleground. Putin has to find a political solution sooner rather than later in Syria. If European countries have problems with foreign fighters, the Russians have 10 times more problems. They have all the terrorists from the Caucasus and have had two wars in Chechnya.

Q. What do you expect from President Putin?

A. A Russian-American dialogue will help. Otherwise, the Americans and Russians will fight it out in Syria and Libya. If you keep this tension going, the next problem will be in Moldova. . . . Russians are going to continue to shake the tree, unless we come to a meeting of minds.

Q. Is that a good solution for the West?

A. If we can solve Syria and come to a common understanding that is fair for the Syrian people, then yes. Crimea is Putin’s No. 1 issue, and I think that you say, “Let’s discuss Crimea, but when it comes to Syria, you have to move.”

Q. Is it true that Arab leaders are rejoicing because they feel that President Trump will be tougher on Iran than his predecessor?

Q. What is your view?

A. There are some strategic problems that Iran is involved in in our area. But here, again, is an opportunity: bringing Israel and the Arabs closer together. Because of the Iranian regime’s potential threat to the region, Israel wants to have a relationship with the Arabs. But the problem that is [standing] between the Arabs and the Israelis is the Palestinians. The whole point of our peace initiative is for us to be the guarantors of Israel’s security. If we can solve the Palestinian problem, then this is a new era of stability in our area, where Israelis are truly a part of the neighborhood.

Q. Are you worried when you look north that Iran will remain dominant in a post-Raqqa Syria?

A. There is an attempt to forge a geographic link between Iran, Iraq, Syria and Hezbollah/Lebanon. I raised this with President Putin, who was fully aware of . . . Iran’s strategic intent to have power there.

Q. On your border, don’t you have Iran’s Revolutionary Guard Corps?

A. Yes, the Revolutionary Guard is about 70 kilometers away [in southern Syria]. If it is bad news for us, you have to put the Israeli equation into this.

Q. They must be very concerned. What will you do about it?

A. We were very explicit with the Russians, as were the Israelis, that nonstate actors from outside coming towards our border are not going to be tolerated. I think we came to an understanding with the Russians.

Q. Will Iran dominate Iraq in the future, if nothing changes?

A. We have had a hand in the reconciliation between all the Iraqis — Kurds, Sunnis and Shia. I will be meeting with Sunni, Shia and Kurdish leaders in the near future, so we can build the atmosphere of reconciliation.

Q. But right now it looks like Iran will dominate a future Iraq. Am I wrong?

A. It has tremendous influence in Baghdad. I think bringing the nationalists together who believe in Iraq . . . tends to level the balance more.

Q. But isn’t the growing influence of Iran a threat to the region? Isn’t Iran backing the Shia-led Houthi militias in Yemen?

A. Iran is there. Iran is also in east Africa and in Africa in general. They have been there for a while trying to dominate. That has been somewhat nipped in the bud. But unless we strengthen the African countries, then other players will come in and try to dictate their policies. So the U.S. is more engaged in Somalia and is strengthening its relationships with Kenya, Ethiopia and Djibouti, because those are the critical countries fighting al-Shabab.

Q. What about U.S. aid to Jordan? Do you want to see it continued at its present level or increased?

A. We want to stop being a country that receives aid within the next four or five years. So increasing aid will allow us to increase growth and be able to wean ourselves off aid more quickly. We are going through a massive restructuring of the armed forces — we are coming down in size. We are shedding all our heavy equipment, because we can’t afford it. So support to the military is also important. With 20 percent of our country’s population being refugees, that puts an immense burden on our government. We are covering their health and education. The U.S. is our biggest supporter. We received $1.275 billion last year.

Q. What was your impression of President Trump?

Q. What do you worry about the most?

A. My people and their economic situation.

Q. Unemployment is very high in Jordan, isn’t it?

A. There is a lot of unemployment, and that could lead to radicalization. That is what has kept me up for the past five or six years: the economy. Not the politics or the military or security situation. I am trying to grow the economy and look after my people.