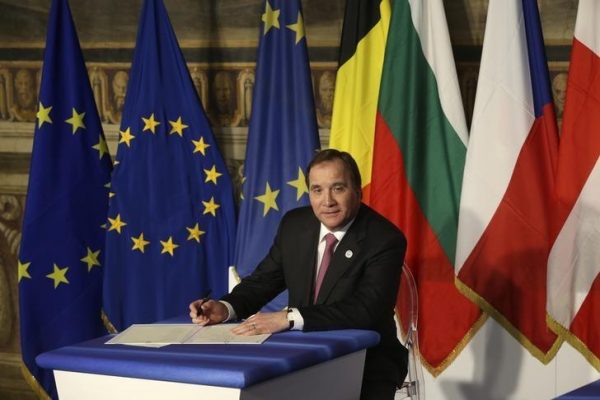 Sweden’s Prime Minister Stefan Lofven prepares to sign a document during the EU leaders meeting on the 60th anniversary of the Treaty of Rome, in Rome, Italy March 25, 2017. REUTERS/Remo Casilli
Share:

Prime Minister Stefan Lofven said “foreign powers” were likely to try to interfere with Sweden’s elections next year, adding the country’s cyber-security defenses would be strengthened.

“It is becoming more and more obvious that foreign powers are trying to influence elections” around the world, he said.

“Sweden is not immune,” he told reporters.

“We can note there are influence operations against Sweden and we expect such operations, aimed at next year’s election.”

The armed forces and Sapo counter-intelligence agency had also been assigned increased duties related to the election in September 2018.

Earlier this month, Sapo said it had investigated electronic attacks on targets like energy firms, the telecoms and financial sectors and the government in 2016.

Sapo said it believed they were by a state-sponsored actor, but would not name a country. However, the spy agency identified Russia as the biggest general threat to Sweden’s security.

U.S. authorities are investigating allegations that Russia tried to help Donald Trump win last year’s presidential election while Germany has raised its alert level against cyber attacks ahead of elections there in September.