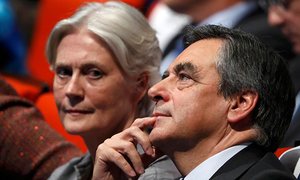 François Fillon, pictured at a rally with his wife, Penelope. Fillon, the former frontrunner whose bid has been thrown into turmoil by a corruption investigation, said his campaign events were being disrupted “every day” by far-left activists. Like Trump he accused the media of bias
Share:
The wife of French presidential candidate Francois Fillon is facing preliminary charges over well-paid parliamentary jobs that investigators suspect she never performed.

Fillon himself has already been charged in the case, which has deeply damaged the conservative candidate’s chances for the two-round election April 23 and May 7. He is suspected of embezzlement and other charges.

Penelope Fillon is expected to face investigating judges Tuesday in Paris who can hand her preliminary charges in the case.

Investigators recently expanded the probe on suspicions that the couple falsified documents after the investigation opened to prove that Penelope carried out parliamentary work for her husband.

The Fillons have denied wrongdoing. Francois Fillon, once the front-runner, calls the investigation a smear campaign to torpedo his presidential campaign.