May: Westminster attacker was British-born man known to M15 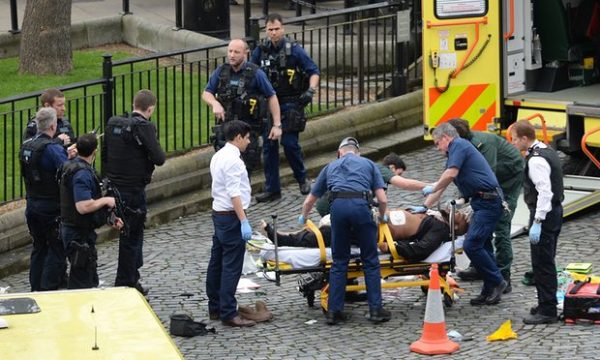 The suspected attacker Khalid Masood is treated by emergency services at the scene outside the Palace of Westminster. Photograph: Stefan Rousseau/PA
Share:

British Prime Minister Theresa May on Thursday said police have identified the Westminster attack suspect as a British-born man who was already known to the country’s intelligence services.

“What I can confirm is that the man was British-born and that some years ago he was once investigated by MI5 in relation to concerns about violent extremism,” she told lawmakers, but noted he was considered a peripheral figure.

“The case is historic, he was not part of the current intelligence picture.”

May, who did not disclose the suspect’s name, said there had been no prior intelligence of his intent nor of the plot, noting also he is believed to have acted alone and that there is no reason to believe “imminent further attacks” are planned.

May said terrorism would not prevail as she rallied the country to carry on with its everyday business and stick to British values in response to the attack on parliament.

Wednesday’s attack, in which two pedestrians and a police officer were killed, has been claimed by the Islamic State group.

Eight people have been arrested in raids on several addresses in London, Birmingham and elsewhere in the country in connection with the deadly attack , British police said Thursday.

Metropolitan Police counterterrorism chief Mark Rowley told reporters at a press conference held outside London’s police headquarters that the arrests had been made after at least six raids on addresses across the country, with the bulk of them having been carried out in Birmingham and the capital.

Rowley refused to give details about the attacker but said the assailant is believed to have acted alone after being “inspired by international terrorism”.

A doctor who treated the wounded from the bridge said some of the victims had “catastrophic” injuries. Three police officers, several French teenagers on a school trip, two Romanian tourists and five South Korean visitors were among the injured.