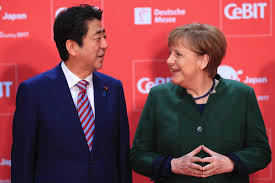 Barely 48 hours after Merkel and President Donald Trump clashed on economic policy at their first White House meeting, the German leader called for swift conclusion of a trade accord between Japan and the European Union. That followed a renewed German-Chinese commitment to open markets on the eve of her trip to Washington and Merkel’s backing for a free-trade accord between the EU and Mercosur, the South American economic bloc.

“Of course we want fair markets, but we don’t want to put up barriers,” Merkel said Sunday evening in a speech in Hanover, Germany, pushing back against Trump’s pledge to enact “America First” policies. “At a time when we have to quarrel with many about free trade, open borders and democratic values, it’s a good sign that Germany and Japan aren’t quarreling about that.”

Abe said Japan, the EU’s second-biggest Asian trading partner after China, “wants to be the champion of upholding open systems alongside Germany.” The prime minister, who met Trump in February, said “it will be necessary to have rules that are fair and can stand up to democratic appraisal.” Abe and Merkel are due to give a press briefing later on Monday at the Hanover trade fair, where Japan is this year’s partner country.

The display of German-Japanese unity underscores a rift elsewhere among the world’s biggest economic powers after U.S. insistence on “fair” trade triggered conflict at a weekend meeting of Group of 20 finance chiefs in Germany. Another potential clash looms when Trump, Abe, Merkel and the leaders of Canada, France, Italy and the U.K. meet at a Group of Seven summit in Sicily in May.

A commitment to free trade and defense spending are emerging as the first key dividing lines with the Trump administration, with Germany in the firing line on both counts. The U.S. and Germany traded barbs over the weekend over Trump’s assertion on Twitter that “Germany owes vast sums of money” to NATO and the U.S. for defense.

The clashing views of trade were exposed when Trump told Merkel at a White House news conference on Friday that the U.S. had been treated “very, very unfairly” and said “negotiators for Germany” had bested their American counterparts.

Merkel replied with an explanation of how the EU conducts trade talks, saying it’s the Brussels-based European Commission that negotiates on behalf of all 28 EU countries.

The U.S. stance is pushing China and Germany, the world’s No. 1 and No. 3 exporters, closer, with Merkel and President Xi Jinping renewing their support for open markets in a phone call on Thursday, hours before she traveled to Washington.

Trump’s complaint on trade reflects comments by the head of his National Trade Council, Peter Navarro, who has denounced Germany’s trade surplus, accusing Europe’s biggest economy of exploiting its position within the euro area to gain advantage. He was among those in the audience for the news conference. Merkel and her government have rejected those accusations as absurd.

While standing her ground with the U.S. president, Merkel is touting a trade accord between the EU and Canada that European lawmakers backed in February as an example of the power of open markets. Europe “must never retreat, wall itself off or withdraw,” she said in a speech to parliament in Berlin on March 9.

Talks on an EU-Japan accord began in 2013 with the goal of lowering barriers to trade and investment on both sides. Japan and the EU jointly account for more than a third of global economic output, according to European Commission data.

Germany is ready to “be the motor” for completing the deal as a signal that “we want free, open markets,” Merkel said Sunday.
BLOOMBERG