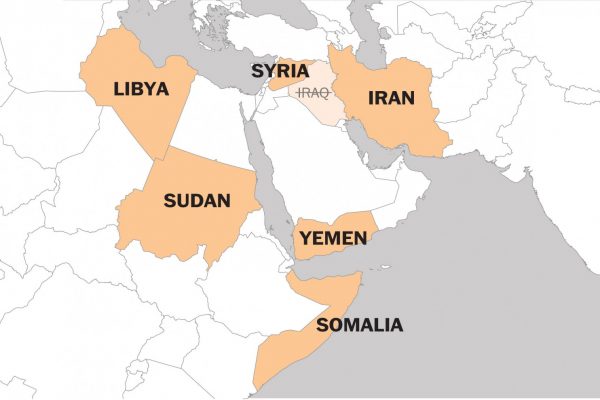 President Trump signed a new travel ban Monday that administration officials said they hope will end legal challenges over the matter by imposing a 90-day ban on the issuance of new visas for citizens of six majority-Muslim nations.

In addition, the nation’s refu­gee program will be suspended for 120 days, and the United States will not accept more than 50,000 refugees in a year, down from the 110,000 cap set by the Obama administration.

The new guidelines mark a dramatic departure from Trump’s original ban, issued in January and immediately met by massive protests and then ordered frozen by the courts. The new ban lays out a far more specific national security basis for the order, blocks the issuance of only new visas, and names just six of the seven countries included in the first executive order, omitting Iraq.

Trump signed the new ban out of public view, according to White House officials. The order will take effect March 16.

“This executive order responsibly provides a needed pause so we can carefully review how we scrutinize people coming here from these countries of concern,” Attorney General Jeff Sessions said in announcing that the order had been signed.

The order also details specific sets of people who would be able to apply for case-by-case waivers to the order, including those previously admitted to the United States for “a continuous period of work, study, or other long-term activity”; those with “significant business or professional obligations”; and those seeking to visit or live with family.

Trump’s campaign, meanwhile, sent out an email asking people to sign a petition in support of the new order.

“As your President, I made a solemn promise to keep America safe,” the email signed by Trump said. “And I will NEVER stop fighting until we implement the policies you — and millions of Americans like you — voted for.”

Democrats and civil liberties groups said Monday that the new order was legally tainted in the same way as the first one: It was a thinly disguised Muslim ban. Trump, in his email, used the phrase “radical Islamic terrorism” to describe his concern with the countries whose citizens would be blocked from acquiring visas.

That seems to portend more litigation — though how soon remains unclear. The attorney general of Washington state, Bob Ferguson, who successfully sued to have the first ban blocked, said he was still reviewing what to do.

The new order, Ferguson said, represented a “significant victory” for Washington state because the administration had “capitulated on numerous key provisions that we contested in court.” But he said state lawyers would need two or three days to see what action they would take in the court case.

“We’re reviewing it carefully, and still have concerns with the new order,” Ferguson said.

The Justice Department argued in a court filing that even if the litigation were to move forward, it should do so at a slower place, and with the new ban in place. The government noted that visa applicants typically have to wait months and asserted there was “no imminent harm” from the president’s temporary suspension of the issuance of new visas to certain people.

That assertion, though, did little to assuage the concerns of Democrats and civil liberties groups, who said the new ban was just like the old.

Karen Tumlin, the legal director of the National Immigration Law Center, predicted that federal judges who ordered a restraining order on the earlier ban are likely to do so again, and that pending lawsuits filed by her organization and others will not need to be filed anew. “From our vantage point, that litigation lives on,” she said.

New York Attorney General Eric T. Schneiderman (D), who had joined the legal fight against the first ban, said, “While the White House may have made changes to the ban, the intent to discriminate against Muslims remains clear.”

Omar Jadwat, director of the American Civil Liberties Union’s Immigrants’ Rights Project, said, “The only way to actually fix the Muslim ban is not to have a Muslim ban. Instead, President Trump has recommitted himself to religious discrimination, and he can expect continued disapproval from both the courts and the people.”

“President Trump still seems to believe you can determine who’s a terrorist by knowing which country a man, woman or child is from,” said Grace Meng, an immigration researcher with Human Rights Watch. “Putting this executive order into effect will only create a false sense of security that genuine steps are being taken to protect Americans from attack, while undermining the standing of the U.S. as a refuge for those at greatest risk.”

Officials from the State, Homeland Security and Justice departments defended the new order as a necessary measure to improve public safety. They said the countries named — Iran, Sudan, Somalia, Libya, Syria and Yemen — were either state sponsors of terrorism, or their territories were so compromised that they were effectively safe havens for terrorist groups. Iraq was omitted, Secretary of State Rex Tillerson said, because it is an “important ally in the fight to defeat ISIS” and its leaders had agreed to implement new, unspecified security measures.

Civil rights advocates said Monday that the sudden exclusion of Iraq, as well as the omission of other countries with active terrorist groups — such as Colombia, Venezuela, Pakistan and the Philippines and others — underscored the ban’s arbitrariness as a national security measure.

The new order provides other exceptions not contained explicitly in previous versions: for travelers from those countries who are legal permanent residents of the United States, dual nationals who use a passport from another country, and those who have been granted asylum or refu­gee status. It removes an exception to the refu­gee ban for members of religious minority groups — which critics had pointed to as evidence the first ban was meant to discriminate against Muslims — and it no longer imposes an indefinite prohibition on travelers from Syria.

Anyone who holds a visa now should be able to get into the country without any problems, although those whose visas expire will have to reapply, officials said.

The order claims that since 2001, hundreds of people born abroad have been convicted of terrorism-related crimes in the United States. It cites two specific examples: Two Iraqi nationals who came to the United States as refugees in 2009, it says, were convicted of terrorism-related offenses, and in October 2014, a Somali native brought to the country as a child refu­gee was sentenced to 30 years in prison for plotting to detonate a bomb at a Christmas tree-lighting ceremony in Oregon. That man became a naturalized U.S. citizen.

The new ban also says that more than 300 people who entered the country as refugees were the subject of active counterterrorism investigations. U.S. officials declined to specify the countries of origin of those being investigated, their immigration status, or whether they had been charged with crimes.

Charles Kurzman, a sociology professor who studies violent extremism at the University of North Carolina at Chapel Hill, said that since the terrorist attacks of Sept. 11, 2001, there have been no fatalities caused by Muslim extremists with family backgrounds in the six countries covered by the new ban. A Department of Homeland Security report assessing the terrorist threat posed by people from the seven countries covered by the president’s original travel ban had cast doubt on the necessity of the executive order, concluding that citizenship was an “unreliable” threat indicator and that people from the affected countries had rarely been implicated in U.S.-based terrorism.

The Department of Homeland Security official, speaking on the condition of anonymity, criticized the report as being incomplete and not vetted with other agencies, and he said the administration should not be pressed by the judiciary to unveil sensitive national security details to justify the ban.

The order represents an attempt by the Trump administration to tighten security requirements for travelers from nations that officials said represent a terrorism threat. A more sweeping attempt in January provoked mass protests across the country as travelers en route to the United States were detained at airports after the surprise order was announced. The State Department had provisionally revoked tens of thousands of visas all at once.

Officials sought to dismiss the idea that there would be any confusion surrounding the implementation of the new order. They said they delayed implementation so the government could go through the appropriate legal processes and ensure that no government employee would face “legal jeopardy” for enforcing the order.

The revisions to the order will make it more defensible in court — limiting the number of people with standing to sue — but the changes might not allay all the concerns raised by judges across the country. The three-judge panel with the U.S. Court of Appeals for the 9th Circuit, for example, said that exempting green-card and current visa holders from the ban would not address their concern about U.S. citizens with an interest in noncitizens’ travel.

The administration, too, will have to wrestle with comments by the president and top adviser Rudolph W. Giuliani that seemed to indicate the intent of the order was to ban Muslims from entering the United States, which could run afoul of the Establishment Clause of the First Amendment.

On the campaign trail, Trump called for a “total and complete shutdown of Muslims entering the United States.” After the election, Giuliani, a former New York City mayor, said: “So when [Trump] first announced it, he said, ‘Muslim ban.’ He called me up. He said, ‘Put a commission together. Show me the right way to do it legally.’ ”

A federal judge in Virginia referenced those comments in ordering the ban frozen with respect to Virginia residents and institutions, calling it “unrebutted evidence” that Trump’s directive might violate the First Amendment.