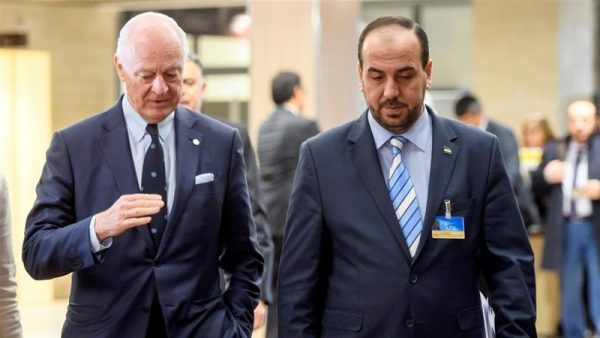 The opposition said President Bashar al-Assad’s negotiators had been pushed by his Russian allies to address the issue of political transition – which Assad’s opponents say must involve him handing over power.

A source close to the Syrian government delegation said there was agreement that tackling “terrorism” – a broad term which Damascus uses to describe all armed opposition to the president – would also be on the agenda.

It remained unclear whether the two goals were compatible or if the two sides were on a collision course, as in past negotiating rounds a year ago.

But diplomats said the opposition’s meeting with Russia’s Deputy Foreign Minister Gennady Gatilov may be a milestone and uncomfortable for President Bashar al-Assad, Moscow’s ally, who regards his opponents as terrorists.

Yahya Kodmani, head of the opposition delegation, told reporters that he and colleagues had made strong and clear points to Gatilov, and Russia would need time to respond.

One diplomat said the opposition had been disappointed because the Russians had stuck to their long-standing positions that the rebels were too divided to negotiate with.

U.N. envoy Staffan De Mistura unexpectedly came to the opposition’s hotel late in the evening after their meeting with Gatilov, but declined to comment on the process.

So far the Geneva talks have focused almost entirely on how to arrange more substantive later rounds, but both sides said on Wednesday they had held “deep” discussions with de Mistura earlier in the day.

“We notice now that the political transition subject has become the main subject on the table,” opposition negotiator Nasr al-Hariri told reporters.

The opposition wants to discuss “political transition” and, after hearing from de Mistura said they believed that Russia had persuaded Syria’s government negotiators that it should be on the agenda of the talks.

Assad’s chief negotiator Bashar al-Ja’afari has never accepted discussion of the subject before.

The talks are governed by U.N. Security Council resolution 2254, which sets out a political transition process including plans for a new constitution, U.N.-supervised elections and transparent and accountable governance.

De Mistura wants to put those subjects into three “baskets”. Two Western diplomats said the Syrian government agreed to study the baskets, but said a fourth basket should be “terrorism”.

A source close to the government delegation said that talks had been constructive and led to “an agreement on four equally important baskets” that included terrorism.

Kodmani said there was no “terrorism basket” in Resolution 2254, and the talks should start with political transition because it is the main point.

A ceasefire backed by Russia, Iran and Turkey has not stopped the fighting. Russian news agencies reported that a new round of ceasefire talks would start on March 14, and cited Gatilov as saying more Geneva talks could follow on March 20.

The Syrian Observatory for Human Rights, which monitors the conflict, said government bombardment of a rebel-held area in Damascus’s northeastern outskirts intensified on Wednesday, and fighting between government forces and rebels killed 13 Syrian soldiers.

Government forces launched attacks around Qaboun in the days leading up to the current round of peace talks, the fiercest assault there for more than two years, according to the Observatory and a medical worker in the area.