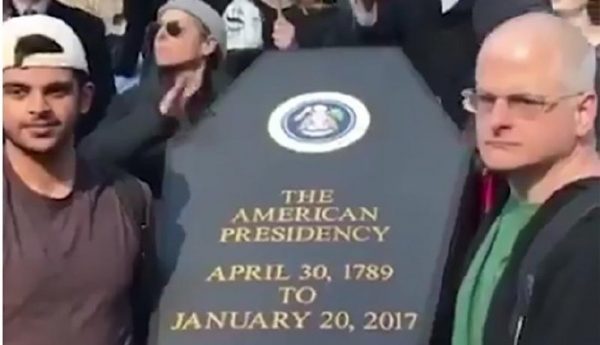 A few of the demonstrators held up a prop tomb stone that read: “The American Presidency … April 30, 1789 to January 20, 2017.” (Screen shot)
Share:
Demonstrators are taking to the streets in New York City to protest President Trump, including a man dressed up as the 16th president, Abraham Lincoln.

Video posted to social media on Saturday showed protesters at a “mock funeral” for the U.S. presidency, according to ABC News. Clad mainly in black, they chanted “Down with Trump,” and carried signs that showed the upside-down images of past presidents.

Trump himself is nowhere near New York, but rather Florida, where he is scheduled to hold a rally in the evening. But, according to reports, Trump won’t escape protesters when he speaks in Melbourne.

Continuing his regular mockery of the president, “Late Show” host Stephen Colbert ended his Friday night monologue by paying tribute to all the Stephens/Steves of the world who, as he suggested, are suffering for sharing the same name as key aides to President Trump.

“There are so many Stephens in the Trump administration. It’s a rough time for the Stephen community,” Colbert said, noting the obvious, of course — that he, too, shares the name. “So tonight, I stand up for Steves, because we, Steves, are your neighbors. We’re your mailmen. We are your brothers-in-law.”

“When you want to read about a demon who kills New England children, do you pick up a book by Bernie King? No. You go to Stephen King every time. Stephens invented the Stone Cold Stunner,” Colbert said, referring to professional wrestler Steve Austin’s signature move.

Colbert made special mention of Stephen A. Feinberg, a New York billionaire who might be in line to lead a broad review of U.S. intelligence agencies. The president has repeatedly and publicly assailed those agencies for leaking information to the news media. During a news conference Thursday, Trump downplayed the possibility of Feinberg launching a review of the country’s intelligence agencies and said the move might not be necessary once his team is in place, The Washington Post’s John Wagner and Renae Merle reported.

Feinberg, a longtime friend of Trump and co-founder of Cerberus Capital Management, “offered his services,” the president said, but he also added he doesn’t think his administration will need them.

Colbert said the other controversial Stephens or Steves in the Trump administration, obviously, are Stephen K. Bannon, the president’s chief strategist and former executive chairman of Breitbart News; Steve Mnuchin, who ran a bank that foreclosed on tens of thousands of Americans and is now the treasury secretary; and Stephen Miller, Trump’s senior policy adviser who wrote the executive order on the president’s travel ban and spouted falsehoods about alleged voter fraud.

Colbert devoted the first part of his monologue with highlights of Trump’s tumultuous past week.

“The president has hit a bit of a rough patch,” Colbert said, starting with the news of the resignation of Trump’s national security adviser, Michael Flynn, over revelations that Flynn discussed Obama administration sanctions on Russia with the Russian ambassador to the United States before the inauguration and later mischaracterized those communications with Vice President Pence and others.

The Post’s Sari Horwitz and Adam Entous reported that Flynn, before his resignation, denied to FBI agents that he had discussed the sanctions with the Russian ambassador.

“Now, it turns out, lying to the FBI is a felony,” Colbert said. “Flynn’s silver lining here, any decision to prosecute would fall to Trump’s Justice Department.”

“Is it election time already? Again? I know it does feel like he’s been in office for four years, but that does seem fast. Here’s why Trump’s doing it. Trump can’t enjoy being president because the buzzkills in our intelligence agencies keep leaking that Vladimir Putin might be the real president.”

Colbert’s regular lampooning of Trump and his administration seem to have paid off, The Post’s Callum Borchers said.