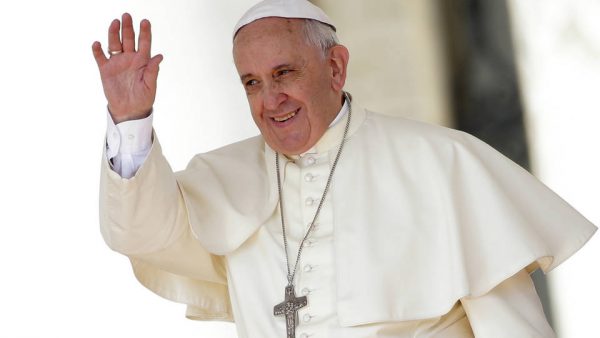 POPE Francis has firmly denied the existence of Islamic terrorism, in a speech to a world meeting of populist movements yesterday.

In an impassioned defence of all faiths, the leader of the Catholic Church argued religion promotes peace and the danger of radicalisation exists in all religious beliefs.

“No people is criminal or drug-trafficking or violent.

“The poor and the poorer peoples are accused of violence yet, without equal opportunities, the different forms of aggression and conflict will find a fertile terrain for growth and will eventually explode.”

Pope Francis added: “There are fundamentalist and violent individuals in all peoples and religions – and with intolerant generalisations they become stronger because they feed on hate and xenophobia.”

The leader of the Catholic Church also condemned the denial of global warming, urging his audience that “the ecological crisis is real”.

He said: “A very solid scientific consensus indicates that we are presently witnessing a disturbing warming of the climatic system.

“We know what happens when we deny science and disregard the voice of nature.

“Let us not fall into denial. Time is running out. Let us act. I ask you again – all of you, people of all backgrounds including native people, pastors, political leaders – to defend creation.”

In an attempt to prevent politicisations of his speech, Pope Francis said he was not “speaking of anyone in particular”, but of a “social and political process that flourishes in many parts of the world and poses a grave danger for humanity”.

Pope Francis also used his speech to denounce “the guise of what is politically correct or ideologically fashionable”.

He added: “The system’s gangrene cannot be whitewashed forever because sooner or later the stench becomes too strong.”