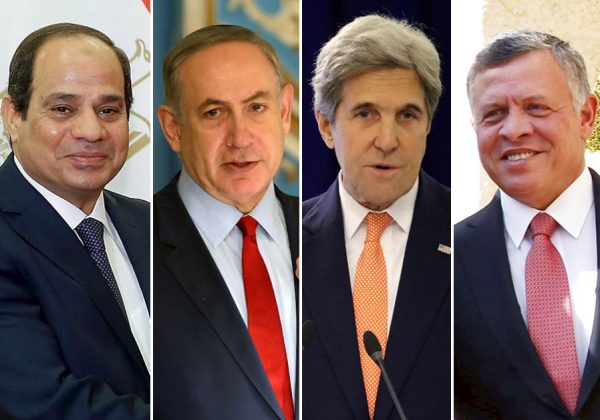 An Israeli newspaper reported Sunday that Prime Minister Benjamin Netanyahu turned down a regional peace initiative last year that was brokered by then-American Secretary of State John Kerry, in apparent contradiction to his stated goal of involving regional powers in resolving Israel’s conflict with the Palestinians.

Haaretz reported that Netanyahu took part in a secret summit that Kerry organized in the southern Jordanian port city of Aqaba last February and included Jordan’s King Abdullah II and Egyptian President Abdel Fattah el-Sissi. According to the report, which cited anonymous Obama administration officials, Kerry proposed regional recognition of Israel as a Jewish state — a key Netanyahu demand — alongside a renewal of peace talks with the Palestinians with the support of the Arab countries. Netanyahu reportedly rejected the offer, saying he would not be able to garner enough support for it in his hard-line coalition government.

The initiative was also reportedly the basis of short-lived talks with opposition leader Isaac Herzog to join the government, a plan that quickly unraveled when Netanyahu chose to bring in nationalist leader Avigdor Lieberman instead and appoint him defense minister.

A former top aide to Kerry confirmed that the meeting took place secretly on Feb. 21, 2016. According to the official, Kerry tried to sweeten the 15-year-old “Arab Peace Initiative,” a Saudi-led plan that offered Israel peace with dozens of Arab and Muslim nations in return for a pullout from territories captured in the 1967 Mideast war.

Among the proposed changes were Arab recognition of Israel as the Jewish state, a key Netanyahu demand, recognition of Jerusalem as Israel’s capital, another key Netanyahu demand, as long as it recognized Palestinian claims to a capital “in Jerusalem” as well, and softened language on the “right of return” of Palestinian refugees to lost properties in what is now Israel, the former official said.

The official, speaking on condition of anonymity because he was still not authorized to discuss the secret meeting publicly, said the Egyptian and Jordanian leaders reacted positively to the proposal, while Netanyahu refused to commit to anything beyond meetings with the Palestinian President Mahmoud Abbas.

“We saw it as building on, or updating, but certainly not superseding” the 2002 Arab initiative, he said.

Netanyahu himself did not address the report in his weekly Cabinet meeting and his office refused to comment. Instead, the prime minister focused on last week’s visit to Washington to meet new President Donald Trump. Netanyahu called the meeting “historic” and one that strengthened the two countries’ longtime alliance. He said at the end of meeting, Trump shook his hand and told him it was a “new day” in Israeli-American relations.

After eight years of testy ties with Barack Obama, Netanyahu seems to be relishing Trump’s warm embrace. The new president has broken from his predecessor in adopting friendlier positions to the Israeli government regarding a tough line on Iran, a vaguer stance on Palestinian statehood and a more lenient approach to West Bank settlements. He’s also promised to move the U.S. embassy from Tel Aviv to Jerusalem to fortify Israel’s claim to the city as its capital, and appointed an ambassador with close ties to the settlement movement.

Netanyahu said the two leaders see “eye to eye” on Iran and a host of other issues. “There is a new day and it is a good day,” he said.

In a joint press conference last week with Netanyahu, Trump offered unwavering support for Israel with the only hint of distance coming in his request of Netanyahu to “hold off” on Jewish settlement construction in territories the Palestinians claim for a future state. Netanyahu said Sunday that the sides have formed joint teams to coordinate settlement construction along with other issues.

In a striking departure from longtime American policy, Trump also refrained from supporting a two-state solution to the Israeli-Palestinian conflict, saying he would defer to whatever solution the sides agreed upon. Netanyahu pleased his coalition partners by holding back from mentioning a potential Palestinian state as well, even though he is on record as supporting the concept.

In a further wrinkle, Lieberman chimed in that for him a Palestinian state remains the preferred outcome — and it should come through the type of regional structure Netanyahu reportedly rejected.

“My vision, it’s the endgame no doubt, two-state solution. I believe that it’s necessary for us to keep the Jewish state,” he said at the Munich Security Conference. “The Palestinians don’t have capacity to sign a lone final status agreement with Israel. It’s possible only as a part of an all-regional solution, not an incremental process but simultaneously.”