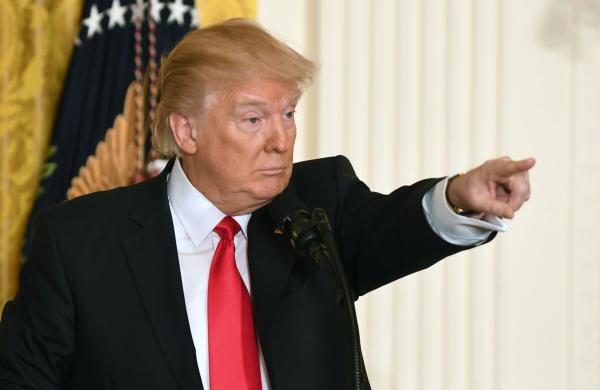 It was an exhausting 77-minute extravaganza, and any five-minute segment would have been enough to make front-page headlines around the world.

For the president of the United States, the simple act of sneezing can be newsworthy. When the president goes on a freeform monologue, occasionally interrupted by questions, that is almost the length of a motion picture, as Donald Trump did on Thursday, the news can be overwhelming. The entirety represents a deluge that is difficult to process.

Trump said he wasn’t “ranting and raving” during his press conference, and that was correct. The president was confidently unhinged as he spent more than an hour berating the press and boasting without any real basis that “there has never been a presidency that’s done so much in such a short period of time”.

The press conference, nominally called to announce the nomination of Alexander Acosta to be secretary of labor, represented the first opportunity for reporters to ask the president about a series of stories about his administration’s ties to Russia and Vladimir Putin. Trump responded by focusing on the real enemy – the media. In fact, at times, it felt that the press conference focused more on CNN correspondent Jim Acosta than Alexander Acosta (Trump even made sure to check with the CNN correspondent that the two weren’t related) as the president prosecuted his case against CNN. Often, Trump seemed to be in a time capsule, railing against Hillary Clinton and reusing entire paragraphs of rhetoric that he had once directed against her while campaigning for the White House.

The result was a spectacle that was sheer entertainment if not terribly presidential. It was more comedian Henny Youngman than president William Henry Harrison as Trump needled reporters and engaged in a brand of insult comedy that was familiar from the campaign trail. At times, reporters couldn’t help but laugh at the president’s jabs despite their best instincts, simply because Trump’s comments were just that wacky and bizarre.

At times, the interactions with reporters went beyond combative into a Twilight Zone. Trump told an Orthodox Jewish reporter who asked him about an upsurge in antisemitic incidents that he had asked “a very insulting question”. He later suggested to an African American reporter who had asked about whether Trump had consulted with the Congressional Black Caucus about his plan for inner cities that she should organize the meeting. “Tell you what, do you want to set up the meeting? Do you want to set up the meeting? Are they friends of yours?” the president asked the reporter about an influential bloc of congressmen.

Trump suggested that “drugs are becoming cheaper than candy bars”; insisted he only claimed falsely at the beginning of the press conference that he had won “the biggest electoral college win since Ronald Reagan” (in fact George HW Bush, Bill Clinton and Barack Obama all won more electoral college votes) because he “was given bad information”; and opined in detail on CNN’s programming and ratings in its 10pm hour.

And there was an abundance of hard news. He insisted that “we had a very smooth rollout of the travel ban” despite all evidence and announced a new executive order on the topic was coming next week. He assailed all reports on his aides’ ties to Russia as “a ruse” and “fake” while conceding that the cascade of leaks on the subject was real. He said he had fired his former national security adviser, Michael Flynn, because “he didn’t tell our vice-president properly” about his calls with Russian ambassador Sergey Kislyak but insisted that there was nothing improper about making the calls. “I would have directed him to do it if he wasn’t doing it, because that’s his job.” And he hedged on Barack Obama’s controversial Daca program for undocumented immigrants who entered the country as children.

During the election campaign, Trump would routinely make half a dozen statements at a single rally that might prove fatal to any other candidate. It was hard for the media to focus on a single issue then, when Trump was still an outsider and an underdog.

Today, some might focus on Trump’s statements on Russia or his attacks on the media. Others might focus on his outright lies and bizarre claims. But there can only be one takeaway from the press conference – Trump may have become president, but he will never be presidential. It has only been 27 days since the president took office. There are still at least three years and 11 months left to go, and it is never going to be normal.