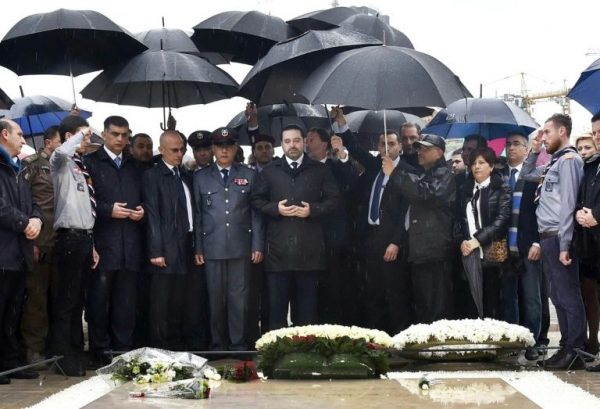 Lebanese Prime Minister Saad Hariri said Monday he stood firm against Syrian President Bashar al-Assad’s “crimes”, at an event marking the anniversary of his father’s assassination that he has blamed on Damascus.

Hariri, whose father Rafiq Hariri was killed along with 22 other people in a February 14, 2005 bomb blast on the Beirut seafront, was elected as the  prime minister in November for a second time, under an arrangement struck with the pro-Syrian Shiite group Hezbollah.

“We negotiated and we made compromises to preserve stability” in Lebanon, he said in an address to a packed hall in Beirut.

“We have not made, and will not make, any compromise on principles such as the Special Tribunal for Lebanon, on our point of view on Assad’s regime, our stand on illegitimate arms and on Hezbollah’s implication in Syria,” he said to loud applause.

The Hague-based tribunal is responsible for trying Rafiq Hariri’s assassination.

Saad Hariri and his allies demand the disarmament of Hezbollah and its withdrawal from Syria where the Shiite group that also forms part of the Lebanese government has been battling alongside Assad’s forces.

Hezbollah, the only group not to have disarmed in the aftermath of Lebanon’s 1975-1990 civil war, insists its arsenal is essential to defend the country against Israel, with which it fought a devastating 2006 summer war.

Five Hezbollah members have been accused by the international court of involvement in the 2005 assassination of Rafiq Hariri, himself a former Lebanese premier.

Both the Syrian government and Hezbollah have repeatedly denied involvement.