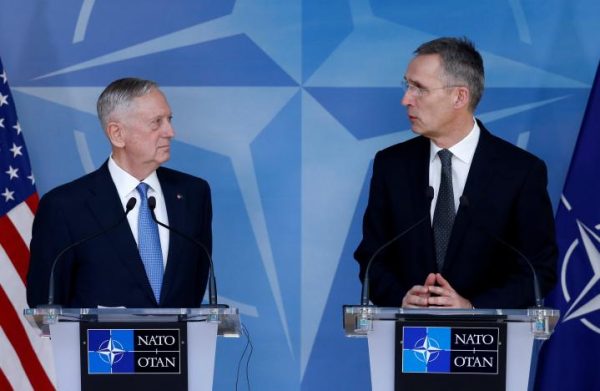 U.S. President Donald Trump’s defense secretary warned NATO allies on Wednesday that they must honor military spending pledges to ensure the United States does not “moderate” support for the alliance.

Jim Mattis, on his debut trip to Brussels as Pentagon chief, also accused some NATO members of ignoring threats, including from Russia.

“America cannot care more for your children’s future security than you do,” Mattis said in a closed-door session with NATO defense ministers, according to prepared remarks provided to reporters.

The comments represented some of the strongest criticism in memory of allies who have failed to reach defense spending goals.

Europe’s low expenditure has long been a sore point for the United States, which puts up 70 percent of alliance funds. But Trump has made change a priority, saying allies have “been very unfair to us” for not spending more.

Since taking office on Jan. 20, Trump has voiced strong support for NATO, comments echoed by Mattis at NATO’s Brussels headquarters. Mattis called NATO “the most successful and powerful military alliance in modern history” and made a point of shaking hands with each of his European counterparts at the start of the meeting.

Mattis, however, suggested U.S. support should not be seen as a given.

“I owe it to you to give you clarity on the political reality in the United States, and to state the fair demand from my country’s people in concrete terms,” Mattis said.

“America will meet its responsibilities, but if your nations do not want to see America moderate its commitment to this alliance, each of your capitals needs to show support for our common defense.”

Mattis stopped short of issuing an explicit ultimatum or say how the United States might moderate its support. The United States for years has called for European allies to spend 2 percent of economic output on defense, he said.

But he added that NATO allies must show progress in 2017 and adopt a plan, with target dates, toward defense spending goals.

Belgium, the Netherlands and Denmark, three other wealthy European nations that are among the smallest spenders on defense, still need to convince centre-left political parties that do not support higher defense spending, preferring to prioritize welfare and education.

But the Baltic states of Latvia and Lithuania, who fear a repeat of Russia’s 2014 annexation of Ukraine’s Crimean peninsula, are on course to meet the 2 percent goal, while Romania is also heading towards that level.

After Mattis’ address, Britain’s Defense Secretary Michael Fallon said the former U.S. general had explained that “the impatience of the American taxpayer is a reality”.

Other defense chiefs appeared to back up Mattis’ plea and he was broadly seen to be reassuring NATO of America’s commitment after a contentious election campaign that put allies on edge.

German Defense Minister Ursula von der Leyen told the session that “the United States is right” on defense spending, according to one official who was present at the time, who spoke to Reuters on condition of anonymity.

Czech Defense Minister Martin Stropnicky said he was not surprised by Mattis’ remarks, and described him as “absolutely calm, humble even” – far from the “Mad Dog” nickname that Trump himself has used for him.

“It wasn’t that dramatic,” he told Reuters. “The important point is that the United States is committed to a strong NATO and that means properly financed armed forces.”

NATO Secretary General Jens Stoltenberg also dismissed concerns about the U.S. commitment to NATO, and played down the fallout from turmoil within Trump’s administration.

Trump has been jolted by the resignation of national security adviser Michael Flynn over his contacts with Russia’s ambassador. U.S. intelligence agencies have accused Moscow of interfering in the 2016 U.S. presidential election.