Trump has been sued over 60 times since becoming president, report 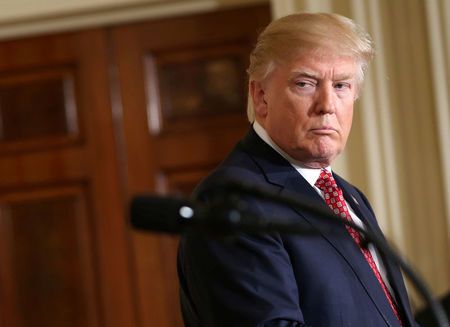 Donald Trump is certainly no stranger to the legal system. He’s been sued thousands of times during his career as a real-estate developer, and that trend appears to be continuing now that he’s president — a job that already draws its fair share of litigation.

Most of the federal lawsuits challenge Trump’s temporary ban on travel from seven predominantly Muslim countries. On Thursday an appeals court declined to lift a hold a federal judge placed on the ban.

Some of the lawsuits reflect not so much on Trump’s actions as the responsibilities of his office. In almost every instance, Trump was sued in his role as president along with other federal officials; in the case titles, “et al” means that there is more than one plaintiff or defendant. A few were filed without the help of an attorney and have little chance of success.

Abou Asali et al vs. U.S. Department of Homeland Security et al: A challenge of the travel ban filed on behalf of Syrians who were deported after arriving in the U.S. to join their brothers in Pennsylvania.

Albaldawi vs. Trump et al: A lawsuit filed in Texas federal court on behalf of travelers who were detained due to Trump’s executive order banning travel from seven predominantly Muslim countries.

Ali Khoshbakhti Vayeghan vs. John F. Kelly et al.: This suit, which names the Homeland Security secretary, was filed against the travel ban on behalf of an Iranian traveler who was set to be deported back to Iran after arriving at LAX.

Al-Mowafak et al vs. Trump et al: The ACLU of Northern California filed this lawsuit on behalf of three California university students who are citizens of the banned countries.

Asgari vs. Trump et al: An Iranian genetic researcher living in Switzerland filed this lawsuit after the travel ban blocked her from joining a lab in Boston, where she planned to study tuberculosis.

Aziz et al vs. Trump et al: A lawsuit filed against the travel ban on behalf of Yemeni brothers who were detained when they arrived in the U.S. to join their father, an American citizen, in Michigan.

Badr Dhaifallah Ahmed Mohammed et al vs. United States of America et al: Another challenge of Trump’s travel ban, this one filed on behalf of foreign travelers seeking to fly to LAX.

Citizens for Responsibility and Ethics in Washington vs. Trump: A group of liberal-leaning watchdogs allege Trump violated the Constitution’s emoluments clause, which prohibits gifts from foreign governments, due to his company’s international dealings.

Cobble vs. Trump et al: A Sumter County, Ga., jail inmate asks the federal government to deport him to England.

Doe vs. Trump et al: A lawsuit filed against Trump’s travel ban by an Iranian-born Chicago businessman who is permanent resident of the U.S., filed under the pseudonym “John Doe,” who said he was stranded after traveling to Iran to care for his ailing mother.

Fatema Farmad et al vs. Donald Trump et al: The ACLU of Southern California filed suit on behalf of two U.S. residents from Iran who flew into LAX and were detained.

Garcia vs. President of the United States of America: An immigrant in New Hampshire resident alleged the government unlawfully failed to renew his work visa.

Hagig vs. Trump et al: A Denver community college student from Libya sued over the travel ban, saying it prevented him from seeing his family in Libya and then returning.

Louhghalam et al vs. Trump et al: Two Iranian professors at the University of Massachusetts-Dartmouth sued over the travel ban after both men were detained at an airport while returning from an academic conference.

McNair vs. Trump et al: An Oregon inmate sued Trump, alleging he was illegally elected and that his businesses have violated the Constitution’s emoluments clause.

At least 60 federal lawsuits have been filed against Donald Trump since he became president on Jan. 20, including this handwritten complaint filed by a federal prisoner who claims Trump has violated the emoluments clause of the Constitution. (PACER)

Muslin [sic], Jews and Christians Against Terrorism et al vs. United States of America et al: A self-filed lawsuit in favor of the travel ban. It asks Trump to issue an executive order implementing “extreme vetting” on foreign travelers and to punish American “sanctuary” cities.

Nanney vs. Bank of America: A North Carolina man self-filed a suit against Bank of America, alleging that it refused to pay him $4 billion, and said Trump used the phrase Make America Great Again “without permission.”

Olson vs. Trump: A Minnesota man self-filed a handwritten lawsuit asking to challenge “the constitutionality by which federal judges are appointed to the bench.”

People of the United States of America vs. Trump et al: A lawsuit against Trump’s travel ban by an Albany, Calif., attorney who says he is acting on behalf of the people of California and the United States.

State of Washington vs. Trump et al: The lawsuit against the travel ban filed by Washington and Minnesota, which led to the travel ban’s first appellate hearing in front of the U.S. 9th Circuit Court of Appeals, which ruled against Trump.

Suh vs. Trump et al: An Illinois state inmate filed an almost unintelligible lawsuit suing the government, including Trump, over his conviction.

Unite Oregon vs. Trump et al: A lawsuit against the travel ban filed on behalf of Oregon immigrants and refugees seeking to enter the state.

Withall vs. Warden, FCI Otisville, NY et al: An inmate in a federal prison sued his warden and Trump to force officials to let him appear in court.

Zadeh et al vs. Trump et al: A lawsuit against the travel ban filed on behalf of Iranian and Somali travelers who had obtained visas to enter the U.S.