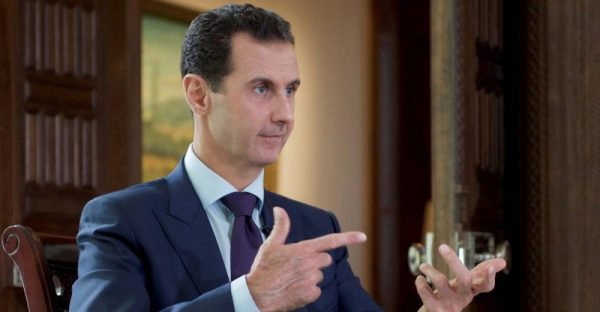 Weighing in on one of the most contentious issues in American politics — the danger posed to host countries by the 4.8 million people who have fled from Syria’s civil war — Syrian dictator Bashar Assad told Yahoo News that some of the refugees are “definitely” terrorists.

In an exclusive interview with Yahoo News at a presidential office in Damascus, Assad said President Trump’s freeze on admitting refugees from his country — part of an executive order that has drawn widespread protests and is being challenged in federal court — “is an American issue” on which he would not take sides. But asked if some of those who fled are “aligned with terrorists,” Assad quickly replied, “Definitely.”

“You can find it on the Net,” Assad went on: “Those terrorists in Syria, holding the machine gun or killing people, they [appear as] peaceful refugees in Europe or in the West.” He said he couldn’t estimate how many there might be, but he added that “you don’t need a significant number to commit atrocities.” He noted that the 9/11 attacks were pulled off by fewer than 20 terrorists “out of maybe millions of immigrants in the United States. So it’s not about the number, it’s about the quality, it’s about the intentions.”

As for the future of Syria’s 4.8 million refugees, Assad said, “For me, the priority is to bring those citizens to their country, not to help them immigrate.”

As with all interviews granted by President Bashar al-Assad, this interview was filmed by his presidential press office. No editorial changes were made to the content.