Senator Sanders on President Trump: ‘This guy is a fraud’ 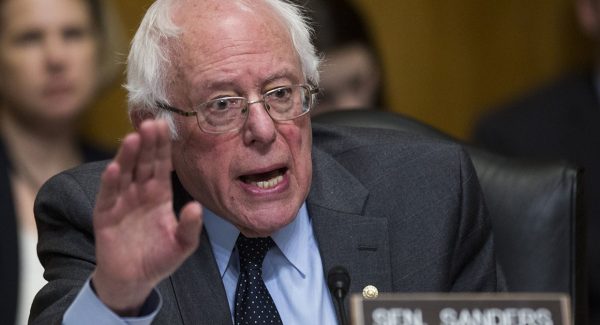 Vermont Sen. Bernie Sanders said Sunday that President Donald Trump is “a fraud” and is working with Wall Street as he looks to roll back some banking regulations.

“It is hard not to laugh, to see President Trump alongside these Wall Street guys. I have to say this, Jake, and I don’t mean to be disrespectful, this guy is a fraud,” Sanders told host Jake Tapper on CNN’s “State of the Union.”

Sanders criticized Trump for appointing “all of these billionaires” to his Cabinet, and singled out his major financial adviser, who comes from Goldman Sachs.

“Man, this guy, he’s a good showman, I’ll give him that. He’s a good TV guy,” said Sanders, who battled Hillary Clinton in the Democratic presidential primary before endorsing her. Sanders’ campaign was based on attacking the nation’s dominant financial interests and income inequality, among other things.

“I think he is going to sell out the middle class and the working class of this country,” Sanders continued. “He told us, in fact, it’s in the Republican platform, he’s going to bring back Glass-Steagall, we’re going to be dividing up commercial banks from investment banks to insurance companies. Then he has all of the big Wall Street guys on his side, and now he is working for Wall Street.”

“You have a president who, I think, in a totally fraudulent campaign said, ‘I’m going to stand up for the working people.’ Look at his Cabinet, we never had more billionaires in a Cabinet in the history of this country. Look at his appointees,” he said. “These are people who are going to go after the needs of working families, the elderly, the children, the sick, and the poor. That is called hypocrisy.”

Sanders said Senate Majority Leader Mitch McConnell and other Republicans need to “have the courage to stand up to Trump’s movement towards authoritarianism.”

“Many men and women of our military did not stand up and fight and die to lead us in the direction of an authoritarian society. We are a democracy, not a one-man show. We are not another Trump enterprise. It’s called the United States of America. We’re not a business run by Mr. Trump,” Sanders said.

He told Tapper that he fears Trump is “moving us in a very authoritarian direction,” mentioning how Trump criticized U.S. District Court Judge James Robart on Saturday by calling him a “so-called judge,” and wants to see someone fill the Supreme Court seat that will “stand up for civil liberties.”