Clinton: Yes ‘the future is female’ and ‘we need strong women to step up and speak out’ 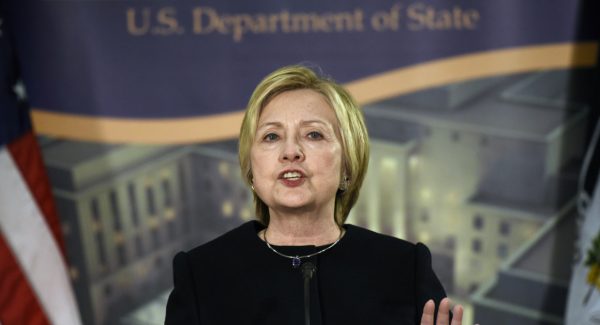 “We need strong women to step up and speak out. We need you to dare greatly and lead boldly,” Hillary Clinton said. | AP Photo
Share:

In a rare public statement since her loss in the 2016 presidential election, former Democratic presidential candidate Hillary Clinton called on attendees at a women’s conference to continue to “be bold” amid concerns over “whether our rights, opportunities and values will endure.”

“Despite all the challenges we face, I remained convinced that, yes, the future is female,” Clinton said in a video address to the MAKERS conference, which kicked off Monday in California.

“Now more than ever, we need to stay focused on the theme of this year’s conference: be bold. We need strong women to step up and speak out. We need you to dare greatly and lead boldly,” she continued. “So please, set an example for every woman and girl out there who’s worried about what the future holds and wonders whether our rights, opportunities and values will endure.”

The video was first published online by the Associated Press, The Guardian and others.

Clinton, the first woman ever to secure the nomination of one of the two major political parties for president, has mostly kept quiet since her surprise loss in last year’s presidential election. She has delivered just a handful of speeches and has willingly taken photos with supporters on hiking trails and in grocery stores near her home in New York.

While she did not mention him by name, Clinton seemed to allude in her remarks to President Donald Trump, whose language towards women in the past ignited multiple campaign controversies but did not ultimately cost him the election. In her video address, Clinton lauded the “amazing energy” shown by protesters who gathered for womens’ marches in cities across the country and around the world on the day after Trump’s inauguration.

“Remember, you are the heroes and history-makers, the glass-ceiling-breakers of the future,” she said. “As I’ve said before, I’ll say again: Never doubt that you are valuable and powerful and deserving of every chance and opportunity in the world.”