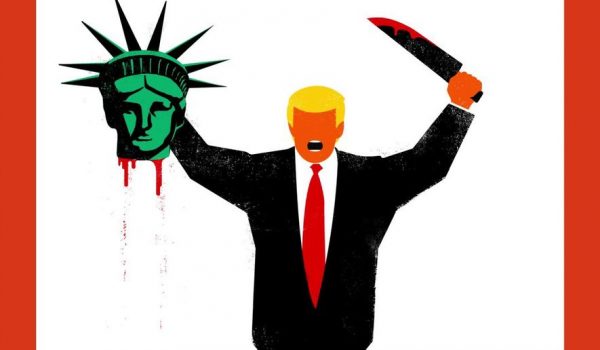 President Ronald Trump is depicted holding the severed, bleeding head of the Statue of Liberty on the cover of Friday’s edition of Der Spiegel, the German news magazine
Share:

Edel Rodriguez came to the United States from Cuba as a political refugee in 1980. Like many immigrants, he was angered by President Trump’s executive ordertemporarily banning entry to the United States for travelers from seven Muslim-majority countries and refugees from around the world.

“I was 9 years old when I came here, so I remember it well, and I remember the feelings and how little kids feel when they are leaving their country,” Rodriguez said. “I remember all that, and so it bothers me a lot that little children are being kept from coming to this country.”

Unlike most immigrants, however, Rodriguez channeled his anger into a piece of art that is now on the cover of one of the world’s leading magazines.

The German news magazine Der Spiegel on Friday unveiled its latest issue, bearing Rodriguez’s striking work. In the illustration, Trump wields a bloody knife with which he has beheaded the Statue of Liberty. His orange face is featureless, except for a hollering mouth. Two words appear beside him: America First.

“It’s a beheading of democracy, a beheading of a sacred symbol,” Rodriguez said, noting that the Statue of Liberty represents the United States’ history of welcoming immigrants. “And clearly, lately, what’s associated with beheadings is ISIS, so there’s a comparison” between the Islamic State and Trump. “Both sides are extremists, so I’m just making a comparison between them.”

In December 2015, after Trump called for a “total and complete shutdown of Muslims entering the United States,” the New York Daily News pictured him beheading the Statue of Liberty. The New Yorker on Friday revealed a new cover illustration called “Liberty’s Flameout,” in which the statue’s flame has been extinguished.

Rodriguez, a freelance artist, did not draw those covers, but you might remember two memorable illustrations he did for Time magazine during the presidential election.

Why does Rodriguez draw Trump with missing facial features?

New @TIME with illustration of a melting Donald Trump:

“That’s the way I see him,” Rodriguez said. “I see him as someone that’s very angry, and it’s pretty much his mouth that’s moving all the time, so that’s how I tend to show him in some of my work.”

Rodriguez added that the Der Spiegel cover is a statement about the kind of country he wants to live in.