Tillerson’s job as top U.S. diplomat got harder before it began 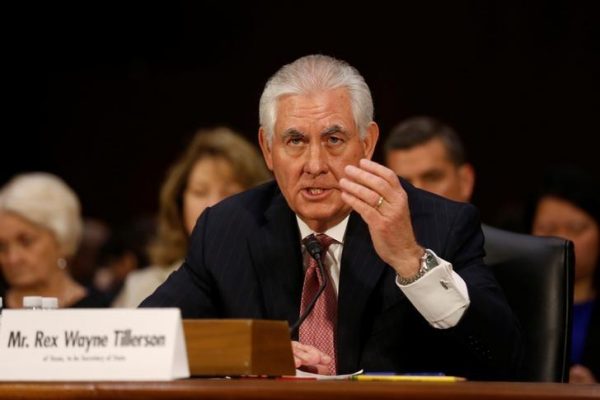 Rex Tillerson, the former chairman and chief executive officer of Exxon Mobil, testifies before a Senate Foreign Relations Committee confirmation hearing on his nomination to be U.S. secretary of state in Washington, U.S. January 11, 2017. REUTERS/Jonathan Ernst
Share:
By Arshad Mohammed and Lesley Wroughton |

WASHINGTON- Rex Tillerson’s job as chief U.S. diplomat became harder before it even began because of White House moves that have antagonized Muslim nations, European allies, Mexico and U.S. bureaucrats, current and former U.S. officials said.
Hours after the Senate confirmed Tillerson as the 69th secretary of state by a 56-43 vote, the former Exxon Mobil Corp CEO was sworn in as the chief foreign affairs adviser to President Donald Trump.

The Senate vote was largely along party lines, with all 52 Republicans voting in favor, along with three Democrats and one independent. Tillerson takes up his post at the State Department on Thursday morning when he will address staff.

Under any circumstance, Tillerson would have inherited a messy globe with a civil war in Syria, nuclear-armed North Korea threatening to test an intercontinental ballistic missile and challenges from a rising China and an assertive Russia.

In the 12 days since Trump’s inauguration, however, the White House has taken steps that foreign policy professionals view as self-inflicted wounds.

“We’ve done a series of own goals,” said a senior U.S. official on condition of anonymity. “There are always mess-ups and friction with new administrations. That’s not new. This is worse than usual.”

On Thursday, Mexican President Enrique Pena Nieto took the rare step of cancelling a Washington trip to meet Trump, who has repeatedly demanded Mexico pay for a wall on the U.S. border.

On Friday, Trump signed an executive order imposing a four-month hold on refugees entering the United States and a temporary bar on most travelers from seven Muslim-majority countries: Iran, Iraq, Libya, Somalia, Sudan, Syria and Yemen.

The order has not only caused consternation for the nations involved but among other Muslim-majority countries, allies such as Germany and Britain and career State Department officials.

“GET WITH THE PROGRAM”

About 900 department officials signed a memo dissenting from the policy, a source familiar with the document said, an unusual rebellion against a new president’s policies.

As reports of the internal dissent spread on Monday, White House spokesman Sean Spicer said career officials who disagreed should “get with the program or they can go.”

The result has been that two constituencies Tillerson has to manage – foreign nations and the U.S. diplomatic corps – have already got their noses out of joint before his swearing-in.

“He will start at a disadvantage and will have to play catch-up to build trust with his foreign counterparts and with State Department employees,” said John Bellinger, a State Department legal adviser under Republican President George W. Bush.

Several current and former U.S. officials said they were dismayed by the process that led to the executive order, with little evidence that there was broad consultation within the government, let alone with Congress or foreign allies.

The secretary of homeland security, John Kelly, was reported to have been largely blindsided by the order. According to the New York Times, he was on a White House conference call getting his first full briefing on it when Trump signed the order.

Loren DeJonge Schulman, a former national security council and Pentagon official, said the belief that Trump did not bring his top advisers into the discussion of the matter would itself handicap the new secretary of state.

“The secretary of state’s power and his influence primarily derive from the idea that he speaks for the president,” said Schulman, now at the Center for a New American Security think tank in Washington, saying it was an open secret the White House may not be consulting cabinet officials on such matters.

“The fact that foreign audiences will realize that on day one is going to definitely weaken his hand,” she said.