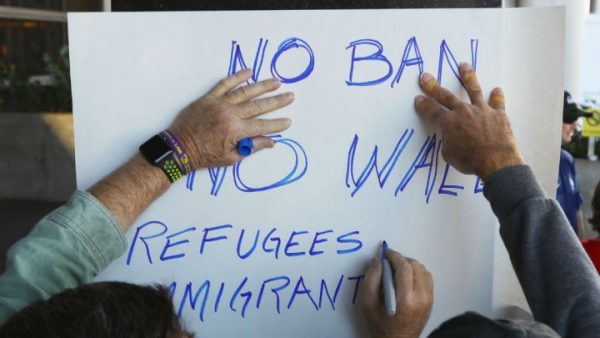 The move, which his administration says is aimed at protecting the United States from terrorist attacks, has been condemned by many countries and has sparked protests and court challenges in the United States.

It “risks people being returned, without proper individual assessments and asylum procedures, to places in which they risk being subjected to torture and other cruel, inhuman or degrading treatment,” the experts said in a statement.

The experts, including the UN special rapporteurs on migrants, racism, human rights and counter-terrorism, torture, and freedom of religion, also said the measure could lead to “increased stigmatization of Muslim communities”.

The Vatican said on Wednesday it was worried about Trump’s moves on immigration, in the Holy See’s first comment since his executive order banning travel into the United States by citizens of seven majority-Muslim countries.

“Certainly there is worry because we are messengers of another culture, that of openness,” theVatican’s deputy secretary of state, Archbishop Angelo Becciu, told an Italian Catholic television station in answer to a question about Trump’s order.

Becciu, who ranks third in the Vatican hierarchy, was asked about the executive order as well as Trump’s promise to build a wall on the U.S. border with Mexico.

“Pope Francis, in fact, insists on the ability to integrate those who arrive in our societies and cultures,” he told TV2000.

Some Roman Catholic leaders in the United States have criticised Trump’s executive order. Cardinal Blase Cupich of Chicago said on Sunday it was “a dark moment in U.S. history” and that it was “contrary to both Catholic and American values”.

Last February, while returning from a trip to Mexico, Pope Francis said then-candidate Trump’s view about building walls was “not Christian”.

In Iran, President Hassan Rouhani stepped up his criticism of Trump’s immigration policies, including the travel ban, dismissing the US businessman-turned-president as a political novice. Tehran has already vowed to respond with legal, political and reciprocal measures.

“It will take him a long time and will cost the United States a lot, until he learns what is happening in the world,” Rouhani said in an address on state television.

Libya’s UN-backed government also criticised Trump’s ban on its nationals. The order has put in question participation of Libyans invited to a conference on Libya planned in Washington this month.

The measure was one of a flurry of executive orders signed by Trump, a Republican, since he took office on Jan. 20.

“Everybody is arguing whether or not it is a BAN. Call it what you want, it is about keeping bad people (with bad intentions) out of country!” Trump said on Twitter early Wednesday.

Reaction to the travel curbs from some Muslim majority countries not on the list of seven designated countries has been more muted.

The United Arab Emirates’ Foreign Minister Sheikh Abdullah bin Zayed said on Wednesday the ban was an internal affair not directed at any faith, and noted that most Muslims and Muslim countries were not included.

The UAE, a major oil exporter, is a close ally of the United States and a member of the US-led coalition fighting Islamist militants in Syria.

Four US states – Massachusetts, New York, Virginia and Washington – have sued to overturn the order on the grounds it flouts constitutional guarantees of religious freedom.