‘The Art of the Deal’ : Why Putin needs one more than Trump 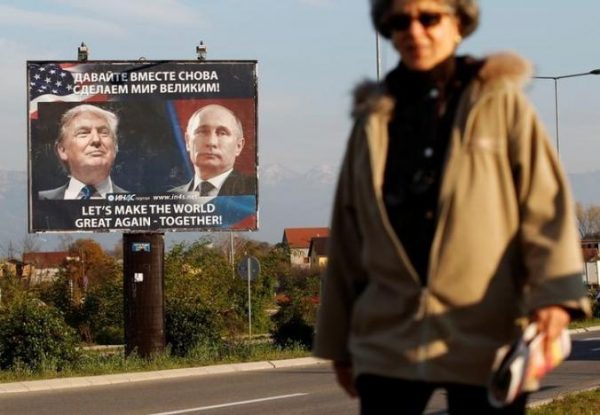 In his book, ‘Art of the Deal,’ Donald Trump said the best deals were ones where both sides got something they wanted. His credo, applied to a potential U.S.-Russia deal, flags an awkward truth for Vladimir Putin: He wants more from Trump than vice versa.

As aides try to set up a first meeting between the two presidents, the mismatched nature of their respective wish lists gives Trump the edge, and means that a deal, if one is done, may be more limited and longer in the making than the Kremlin hopes.

“What the two countries can offer each another is strikingly different,” said Konstantin von Eggert, a commentator for TV Rain, a Moscow TV station sometimes critical of the Kremlin.

“The U.S. has a stronger hand. In biblical terms, the U.S. is the three kings bearing gold, while Russia is the shepherds with little apart from their good faith.”

Appetite for a deal in Moscow, where parliament applauded Trump’s election win, is palpable. The Kremlin blames Barack Obama for wrecking U.S.-Russia ties, which slid to a post-Cold War low on his watch, and with the economy struggling to emerge from two years of recession, craves a new start.

Trump’s intentions toward Moscow are harder to discern, but seem to be more about what he does not want — having Russia as a time-consuming geopolitical foe — than his so far vague desire to team up with the Kremlin to fight Islamic State.

Trump has hinted he may also push for a nuclear arms deal.

Putin’s wish list, by contrast, is detailed, long and the items on it, such as getting U.S. sanctions imposed over Moscow’s actions in Ukraine eased, are potentially significant for his own political future.

He is looking to be given a free hand in the post-Soviet space, which he regards as Russia’s back yard.

Specifically, he would like Trump to formally or tacitly recognize Crimea, annexed from Ukraine in 2014, as Russian territory, and pressure Kiev into implementing a deal over eastern Ukraine which many Ukrainians view as unpalatable.

The icing on the cake for him would be for Trump to back a Moscow-brokered Syrian peace deal allowing President Bashar al-Assad, a staunch Moscow ally, to stay in power for now, while crushing Islamic State and delivering regional autonomy.

For Putin, described in leaked U.S. diplomatic cables as an “alpha-dog,” the wider prize would be respect. In his eyes, a deal would confer legitimacy and show Russia was a great power.

But, like a couple where one side is more interested than the other, the expectational imbalance is starting to show.

Trump spoke by phone to five world leaders before talking to Putin on Jan. 28 as part of a bundle of calls. The White House readout of the Putin call was vague and four sentences long; the Kremlin’s was effusive and fifteen sentences long.

Nor does Trump seem to be in a rush to meet. Dmitry Peskov, Putin’s spokesman, said the two might only meet before a G20 summit due to take place in July.

Trump has good reason not to rush.

With U.S. intelligence agencies accusing Moscow of having sponsored computer hacking to help Trump win office, a deal would hand fresh political ammunition to Trump’s opponents, who say he has long been too complimentary to the Russian leader.

A delay would have the added advantage of postponing a chorus of disapproval from foreign allies and Congress, where there is bipartisan determination to block sanctions relief.

For Putin though, in his 17th year of dominating the Russian political landscape, a deal, or even an early symbolic concession such as easing minor sanctions, matters.

Expected to contest a presidential election next year that could extend his time in the Kremlin to 2024, he needs sanctions relief to help lift the economy out of recession.

Since Putin’s 2012 election, consumer prices have risen by 50 percent, while a fall in the value of the rouble against the dollar after the annexation of Crimea means average salaries fell by 36 percent from 2012-2016 in dollar terms.

Official data puts inflation at 5.4 percent, but consumers say the real figure is much higher, and fear of inflation regularly ranks among Russians’ greatest worries in surveys.

“It would be a huge bonus if it happened,” said Chris Weafer, senior partner at economic and political consultancy Macro-Advisory Ltd, who said he thought Putin wanted to put rebuilding the economy at the heart of his next term.

The economy matters to Putin because, in the absence of any more land grabs like Crimea, greater prosperity is one of the few levers he has to get voters to come out and support him.

With state TV affording him blanket and favorable coverage and with the liberal opposition still weak, few doubt Putin would genuinely win another presidential term if, as expected, he decided to run.

But for the win to be politically durable and for Putin to be able to confidently contemplate serving out another full six-year term, he would need to win big on a respectable turnout.

That, an election showed last year, is not a given.

Around 4 million fewer Russians voted for the pro-Putin United Russia party in a September parliamentary vote compared to 2011, the last time a similar election was held.

Although the economic benefits of a Trump deal might take a while to trickle down to voters, its symbolism could boost turnout, helping Putin prolong a system based on himself.

“It would be presented to the Russian people as a huge victory by Putin,” said von Eggert. “It would be described as a validation of his strategy to go to war in Ukraine regardless of the consequences and to turn the country into Fortress Russia.”