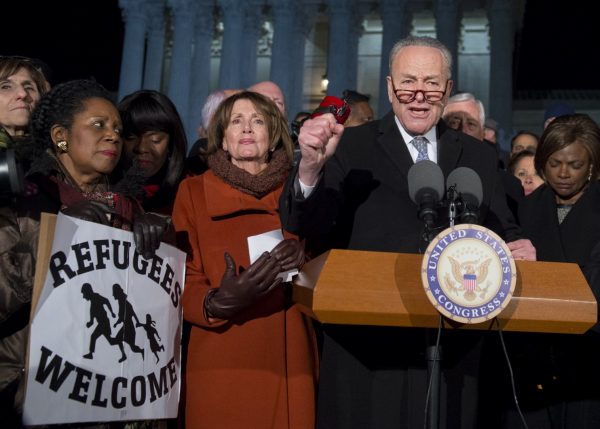 Senate Minority Leader Chuck Schumer (D-N.Y) speaks alongside House Minority Leader Nancy Pelosi (D-Calif.) and other members of Congress as demonstrators protest against President Trump and his administration’s ban of refugees from around the world and foreign nationals from seven Muslim-majority countries. (Saul Loeb/AFP/Getty Images)
Share:
By Ed O’Keefe, Amy Goldstein and Sean Sullivan January 31 at 12:05 PM
Democrats intensified their opposition to President Trump on Tuesday by further delaying the confirmation of several of his Cabinet nominees amid strong Republican objections.

Hours after Trump fired Acting Attorney General Sally Yates for refusing to defend his executive order banning certain immigrants and refugees, Democrats lashed out during a hearing held to approve his choice to lead the Justice Department. Amid concerns with information provided by his picks to lead the departments of Health and Human Services and Treasury, Democrats didn’t show up at another Senate committee at all.

The theatrics drew more attention to Trump’s recent decisions and the growing bipartisan concern with his decision to implement a travel ban with virtually no consultation of top government officials or senior lawmakers.

But it also allowed Republicans to attack Democrats for holding up the formation of Trump’s government. Ultimately, Democrats alone lack the votes needed to block any of Trump’s nominees from eventually taking office — and there are no signs of Republican opposition to any of his picks.

During Sally Yates’s 2015 confirmation hearing for deputy attorney general, Sen. Jeff Sessions (R-Ala.) questioned whether Yates was prepared to “say no” to the president if necessary. Yates was fired by President Trump Jan. 30, after refusing to enforce his controversial travel ban executive order. (Monica Akhtar, Deirdra O’Regan/The Washington Post)
During a hearing of the Senate Judiciary Committee, Democrats criticized Trump for firing Yates and said that they would not support his nominee for attorney general, Sen. Jeff Sessions (R-Ala.), because they do not believe he would ever demonstrate similar independence.

Just down the hallway of the Dirksen Senate Office Building, the Senate Finance Committee convened to vote on Steven T. Mnuchin’s nomination to serve as treasury secretary and Rep. Tom Price’s nomination to be secretary of health and human services — but Democrats boycotted the meeting, forcing Republicans to reschedule both votes.

Meanwhile, Democrats once again tried and failed to stall a vote to advance Trump’s pick for education secretary, Betsy DeVos, to the full Senate amid fresh revelations that she may have plagiarized some of her answers to written questions from senators. The panel agreed to refer her to the full Senate on a party-line vote.

Amid the rancor elsewhere, two Trump nominees earned bipartisan support in the Senate Energy and Natural Resources Committee. The panel approved the nominations of former Texas governor Rick Perry to be energy secretary and Rep. Ryan Zinke (R-Mont.) and sent them to the full Senate for final up-or-down votes.

Developments in the Finance Committee, however, signaled how far Democrats are now willing to go to make their point.

When the meeting began, Finance Committee Chairman Orrin Hatch (R-Utah) sat alone at the dais with just three other Republican senators. Having just come from the Judiciary hearing, Hatch told his colleagues, “Jeff Sessions isn’t treated much better than these fellas are.”

“Some of this is just because they don’t like the president,” Hatch said, later adding that Democrats “ought to stop posturing and acting like idiots.”

Sen. Mike Enzi (R-Wyo.), one of the other Republicans in the room, agreed: “I think this is unconscionable.”

“We did not inflict this kind of obstructionism on President Obama,” added Sen. Patrick J. Toomey (R-Pa.), the only other senator in the room. He added that the Democrats were committing “a completely unprecedented level of obstruction. This is not what the American people expect of the United States Senate.”

But just four years ago, Republicans boycotted confirmation hearings for Gina McCarthy to serve as former president Barack Obama’s interior secretary. The senators said that she had refused to answer their questions about transparency in the agency.

Other walkouts have happened, most famously in 2003, when Rep. Bill Thomas (R-Calif.), chairman of the House Ways and Means Committee, dispatched U.S. Capitol Police officers to try to find Democrats who left a hearing where Republicans were trying to pass a pension bill. He later apologized for his heavy-handed tactics on the House floor.

Shortly before the Finance hearing began, committee Democrats huddled in the office of the panel’s ranking member, Sen. Ron Wyden (D-Ore.), and agreed that they would all boycott the session, aide said.

The boycott was prompted by Democrats’ concerns with Price and his personal financial investments in health-care companies and legislation he promoted that could have benefitted several of the same companies. Some of the stock trades, as well as campaign donations from companies, closely coincided with one another.

A series of stock buys the lawmaker made in an Australian company, Innate Immunotherapeutics, has brought scrutiny for weeks. In 2016, he received a discounted price for his purchases as part of a private offering made to only a certain number of investors; the questions have been whether he received certain insider information from Rep. Chris Collins (R-N.Y.), a company board member and its largest investor, and whether he got a special price when he bought $50,000 to $100,000 in shares last year.

The Wall Street Journal reported Monday that Price received a “privileged” offer that he had mischaracterized in the hearings when he said they “were available to every single individual that was an investor at the time.”

Innate Immunotherapeutics CEO Simon Wilkinson told The Washington Post Monday that the SEC places some restrictions on who can receive such offerings. However, Wilkinson said Price received the same 12 percent discount as about 620 shareholders in Australia, New Zealand and the United States. He also said Price was one of 20 Americans in that group, all of whom fit the definition of “a sophisticated or accredited investor.”

Standing outside his office as the markup was to begin, Wyden told reporters that Price’s statements contradicted those by Wilkinson and other company officials.

“At a minimum,” Wyden said, “I believe the committee should postpone this vote and talk to company officials.”

At the Judiciary hearing, Sen. Dianne Feinstein (D-Calif.) said Yates’s defiance of Trump “took guts. That statement said what an independent attorney general should do. That statement took a steel spine to have the courage to say no.”

“I have no confidence that Sen. Sessions will do that,” she added. “Instead, he has been the fiercest, most dedicated and most loyal promoter in Congress of the Trump agenda.”

In the Senate Health, Education, Labor and Pensions Committee, Democrats tried postponing the vote on DeVos, complaining she had just submitted written responses to hundreds of questions on Monday night. Democrats discovered that some of those responses appeared to use several sentences and phrases from other sources without attribution — including from a top Obama administration civil rights official.

Amid growing public concern with Trump’s travel ban, Democrats have faced louder calls from within their party to boldly stand up to Trump. But further delays could have far-reaching consequences, as became evident on Monday night when the Justice Department was plunged into turmoil.

Trump fired Yates, an Obama-era appointee, for refusing to defend his travel ban in federal court. In her place Trump installed Dana Boente, U.S. attorney for the Eastern District of Virginia, who is expected to hold the job until Sessions is confirmed as attorney general.

Senate Minority Leader Charles E. Schumer (D-N.Y.) said late Monday that Yates’s dismissal “underscores how important it is to have an Attorney General who will stand up to the White House when they are violating the law.”

“Many people have doubts about whether Jeff Sessions can be that person, and the full Senate and the American people should at the very least know exactly how independent he plans to be before voting on him,” Schumer added.

While senators toil over the qualifications and positions of Trump’s nominees, he has started meeting with world leaders, reshaping immigration and trade policy and urged congressional Republicans to begin overhauling the Affordable Care Act — with most of the seats around the White House Cabinet Room still empty.

Schumer was unapologetic on Monday, telling the Spanish-language network Univision that “Senate Democrats, we’re the accountability.

“We’re going to hold Donald Trump accountable. I think in our recent actions on immigration, on the Cabinet. We’re not letting him rush the Cabinet through.”