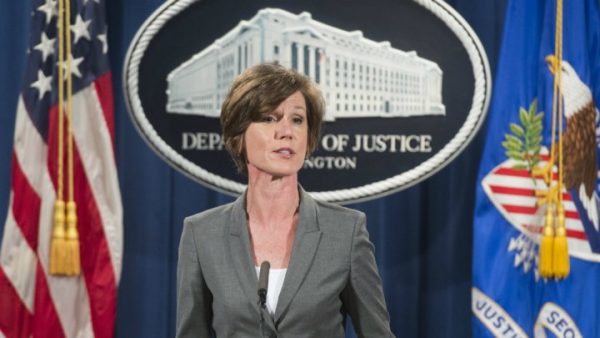 Acting Attorney General Sally Yates doubted the legality and morality of the president’s executive order
Share:
The acting US attorney general, a holdover from the Obama administration, ordered Justice Department lawyers Monday to not defend President Donald Trump’s ban on refugees and other travelers from seven Muslim countries.

In a memo, Acting Attorney General Sally Yates — who served as the agency’s number two official under Barack Obama and is serving as the top law enforcement official in the country until Trump’s nominee is confirmed — said she doubted the legality and morality of the president’s executive order.

“My responsibility is to ensure that the position of the Department of Justice is not only legally defensible, but is informed by our best view of what the law is after consideration of all the facts,” Yates wrote in the memo widely distributed to US media.

“Consequently, for as long as I am the acting attorney general, the Department of Justice will not present arguments in defense of the executive order, unless and until I become convinced that it is appropriate to do so.”

The order signed on Friday suspended the arrival of all Muslim refugees for a minimum of 120 days, Syrian refugees indefinitely and bars citizens from Iran, Iraq, Libya, Somalia, Sudan, Syria and Yemen for 90 days.

Yates’s directive means that the US government has no authorized courtroom representation in lawsuits and other legal challenges currently pending in the courts against Trump’s order and its implementation.

The move is largely symbolic, as Trump’s nominee to be attorney general, Jeff Sessions, is likely to be confirmed soon.

The memo exposes Yates to being fired by Trump.

Sessions faces a vote early Tuesday in the Senate Judiciary Committee and must then be confirmed by the full Senate before taking office.

On Sunday, attorneys general from 16 US states, including California and New York, condemned Trump’s directive as “unconstitutional” and vowed to fight it.