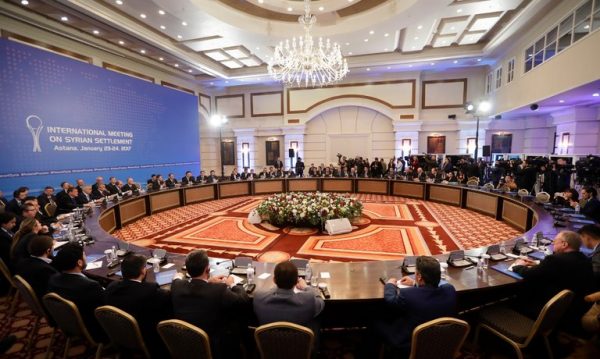 Syrian peace negotiators had heated exchanges during talks in a hotel in Astana, Kazakhstan, on Monday, the first day of meetings to try to end the Syrian civil war. Credit Sergei Grits/Associated Press
Share:
Astana, Kazakhstan (CNN) Syria peace talks in the Kazakhstan capital, Astana, got off to an explosive start Monday as rebel groups announced they would not talk face to face with the regime and the chief Syrian delegate slammed the armed opposition as “terrorists.”

The talks were aimed at consolidating a shaky ceasefire agreement that came into force on December 30, brokered by Russia and Turkey, and could potentially open the path to discussing a political solution to end the brutal civil war, which has raged for almost six years.

But rebel groups refused to talk directly with the regime, as both sides accused each other of violating the ceasefire in the Wadi Barada area outside the capital Damascus and of controlling the water supply to the capital as a weapon of war.

“There are no direct negotiations first of all. The talks will be with the United Nations if the ceasefire is not implemented, particularly in Wadi Barada … in the Damascus country side, and the areas that the regime targets daily,” armed opposition Issam al-Reid said.

UN-brokered talks are scheduled to take place in Geneva on February 8.

“Just yesterday, as is expected before every negotiation, the regime targeted the northern Homs countryside with airstrikes. We still don’t know which nation’s planes carried this out,” Reid said, adding that it was clearly aimed at “causing this dialogue to fail.”

Chief delegate for the Syrian government, Bashar al-Jaafari, repeatedly referred to some of the opposition groups as “terrorists” and accused them of supporting Jabhat Fateh al-Sham — formerly known as Al-Nusra Front — which is not part of the ceasefire as it is designated a terrorist organization by the UN.

The talks are scheduled to last just two days and are likely to go on through the night.
The talks are being brokered by Russia, Turkey and Iran, but delegates have reiterated that the talks will be between Syrians.

Moscow said it invited to the talks all the opposition fighting groups except ISIS and the former al Qaeda affiliate Jabhat Fateh al-Sham. The US-backed Syrian Democratic Council, dominated by Kurdish fighters battling ISIS in northeastern Syria, said it did not receive an invitation to attend.

The US has sent only its ambassador to Kazakhstan, in a sign of its diminishing role in a solution to the conflict.
Meanwhile, the powerful Ahrar Al-Sham group, which counts thousands of fighters in central and northern Syria, said it would not attend the talks over what it said was the regime’s infringement of the ceasefire and its fierce ongoing offensive in Wadi Barada.

The group, however, in a statement, said it was still giving its support to other rebel groups represented at the talks.

What is not on the table is the future role of President Bashar al-Assad. While Russia and Turkey brokered the ceasefire, the two nations sit on opposing sides over Assad, with Moscow supporting the embattled leader and Ankara backing his removal from power.