Communist China Is now the leader of the ‘Free Trade’ World 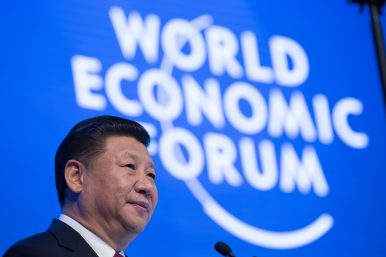 In his speech at at the World Economic Forum in Davos, Switzerland, last week, Chinese President Xi Jinping cast himself as a steadfast defender of free trade, globalization, and economic openness. Xi Jinping warned Donald Trump when he was president elect against isolationist moves which could spark a trade war.
Share:

As hard as this is to believe, China, governed by the Communist Party, the Western world’s former arch ideological enemy, is now the defacto leader of globalization. To say it’s the leader of the free world would take away from Angela Merkel, whom is now seen as the Princess Leia held captive by a bunch of nationalist thugs building a new new world order. But what last week’s World Economic Forum showed us all is that China is the official poster child of free trade.

Yes, the world’s largest closed economy is the bastion of how global economics work, and works well. By odd contrast, Donald Trump’s America first rhetoric goes balls-to-the-wall against Xi Jinping’s China Dream. Trump’s U.S. jobs platform takes a cue from China’s undisclosed full employment policy (China’s had 4.5% unemployment now for like five years straight.) And China’s first ever appearance in Davos stands as evidence that globalization is not dead at all, it’s just run by a communist government in Beijing.

On Monday, Donald Trump canceled Barack Obama’s Trans-Pacific Partnership Agreement. China was never a party to that deal. The idea was to corral China’s biggest Asian trading partners and force them onto the same page as U.S. labor and environmental laws. In an ideal world, this would have pressured China to follow suit if it wanted to trade with those countries. While some of this may have been wishful thinking by Washington — China is already a huge economic power in Southeast Asia — the dead deal gives China a chance to remind its southern neighbors that they are the future.

If China is their future, this has — as Trump would say — huuuuge economic and investing implications long term for China.

“There is no doubt that global economic leadership will now gravitate to the East,” said Jan Dehn, head of research for the Ashmore Group, a London-based investment firm. “In addition to exercising leadership of key economic issues, China is well underway to becoming a true economic giant.”

Based on purchasing power parity, China is expected to be the world’s largest single market economy by 2050.

The rise of China will have many profound implications on the way money flows around this planet of ours. The world’s currency and bond markets like to benchmark themselves against the largest markets and that means more money flowing into Chinese bonds. That market is not very big today, at least not for foreigners. But it will be and China will see to that. Within a decade, the Chinese government bond market could easily rival the U.S. dollar as a foreign currency reserve, and lower the weighting of the dollar in benchmark indices. That means that investment funds that are following that benchmark that says 75 of every 100 dollars needs to be in the greenback will then put 60 of every 100 dollars in the greenback once the index reflects the growing prowess of the Chinese yuan.

A shift like that would be the modern-day equivalent of the Great Britain Pound’s surrender of supremacy to the dollar and the Treasury market between World War I and II.

This would have happened with or without Donald Trump. But now that Trump has chosen China (and Mexico!) as his nemesis, the world is choosing China over him.

China’s rise to economic and financial supremacy is coming anyway. Barring an economic blow out of its own making, China’s rise as a powerful and serious consumer nation has already lured Hollywood. Remember that old adage “If it plays in Peoria”? It meant that if small cities in the American heartland will buy it, anyone will. That’s gone. If it plays in Shanghai…now we’re talking.

Chinese middle class will become the driver of world trade, not the American middle class. That will be the case even if Trump increased median incomes here. That is because Americans don’t save and Chinese…will also save less. They save a lot. And their savings rate is likely to decline from 49% today towards single digits by 2050. China is in the early innings of the largest, and most steady consumption boom the world has seen since the U.S. after World War II.

All this matters to global trade relationships. The Chinese market is where American firms will eventually want to be selling to. It takes years of building trust to create those relationships with China.

The China-U.S. relationship is in trouble. How much trouble is anybody’s guess, but on a scale of 1 to 10, if 5 is neutral, we have moved closer to 6 under Trump. It can go the other way. Not everyone thinks that China wins a trade war, however. But because of the anti-China president now residing in the White House, the world is seeing just how important China is to world trade all the while being one of the largest, closed economies in the world, run in a manner completely antithetical to the Western world that created globalization in the first place.
FORBES
Share: