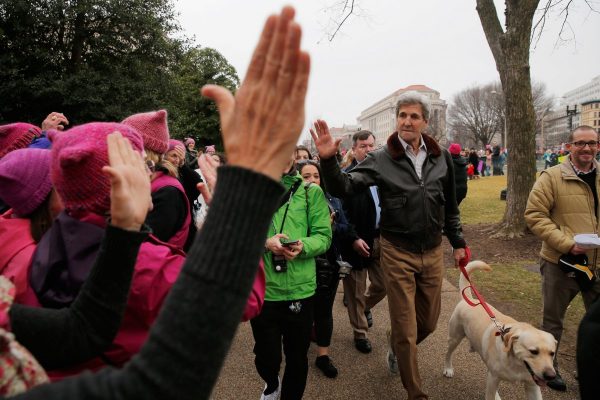 Several politicians were in attendance at the wome’s march . Former US Secretary of State John Kerry walked a yellow Labrador along the march route while giving out high-fives.
Share:

An estimated half a million people joined the Women’s March on Washington on a crisp Saturday the day after Donald Trump was sworn in as the 45th President of the US.

The march aimed to bring together women across diverse backgrounds and send a bold message to the new administration that they will not be ignored or have their rights stomped on.

People carried signs with calls for gender equality and anti-Trump statements, though the rally’s organizers have insisted the demonstration is more pro-women than anti-Trump. Many sported pink knitted beanies called “pussy hats,” a symbol of solidarity among the protestors.

These stunning and soon to be iconic photos show what it was like to be there.

Several politicians were in attendance too Former US Secretary of State John Kerry walked a yellow Labrador along the march route while giving out high-fives.

They gathered to raise awareness of women’s rights …

… and the perceived threat Donald Trump’s administration poses to those liberties.

Unity became a resounding theme during the event’s speeches.

Demonstrators came in all shapes, colors, and sizes.

A pink knitted beanie, known as the “pussy hat,” became a symbol of solidarity among protestors. Knitting parties organized in the weeks before the march.

The ladies of liberty stopped by to support women’s rights.

Marchers filled the streets from sidewalk to sidewalk. The signs were on point. Many stressed the importance of women’s rights as human rights, paying homage to presidential nominee and feminist icon, Hillary Clinton. Princess Leia would be proud. This woman held a sign that imitated the Barack Obama “Hope” poster, designed by artist Shepard Fairey, which came to represent his run for the presidency in 2008. Shepard Fairey recently unveiled a new line of posters featuring Muslim, Latino, and African-American women in the wake of Trump’s election. Here’s one.

Sandy Cryder and Dan Norum of Baltimore took a dig at the president with their sign that showed Trump as a puppet controlled by Russian President Vladimir Putin. Another clever sign mocked Trump’s relationship with the Russian dictator. “Girls just want to have fundamental human rights,” am I right? Marianne Nepsund, 29, from New York, holds a sign displaying one of President Trump’s tweets from 2012, which read, “We should march on Washington.” The event was packed with celebrities, including Melissa Benoist, star of TV’s “Supergirl.”

Scarlett Johansson shared a personal anecdote from the main stage about going to Planned Parenthood as a 15-year-old. She called on the president to support women. The goddess of pop music, Cher, showed up in solidarity. Actress and outspoken women’s rights activist Emma Watson looked like she was missing something atop her head in a sea of pink pussy hats. People held each other in laughter and in tears. It’s unclear just how many showed up for the Women’s March on Washington, but early estimates suggest crowds may have outnumbered those at Trump’s inauguration. Protesters line the streets near the Washington Monument as they head towards the White House for the Women’s March on Washington.John Minchillo/AP

The Washington Metro subway system reported that riders took fewer trips on Friday morning during Trump’s inauguration than did during the Women’s March a day later. No matter their numbers, the women gathered were certainly impossible to ignore. Protesters gather on the National Mall for the Women’s March on Washington during the first full day of Donald Trump’s presidency.John Minchillo/AP