Inauguration Protests Held at a Trump Tower and Elsewhere 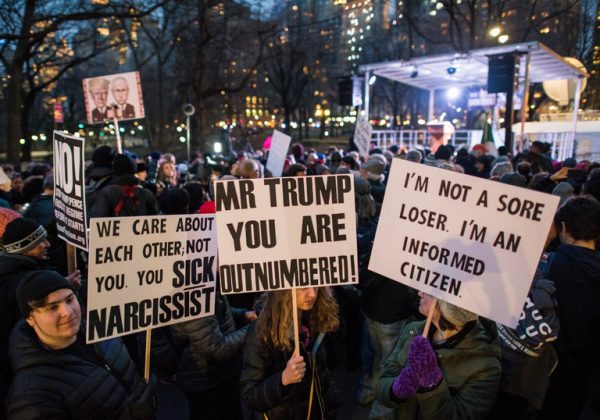 Protesters gathered in Columbus Circle in Manhattan on Thursday.
Share:
On the eve of the inauguration of Donald J. Trump as the 45th president of the United States, thousands of protesters and a group of Hollywood celebrities took to the streets in New York City in what was meant to be a show of unity and a prelude to what organizers hoped would be a weekend of dissent around the country.

In the days after Mr. Trump’s election, protesters gathered night after night, often at the base of Trump Tower in Midtown Manhattan. On Thursday, with his presidency hours from becoming reality, they rallied near Central Park, in the shadow of another one of the many skyscrapers bearing the Trump name.

Many said they had a personal fear of the president-elect. “Trump is a direct threat to me and my humanity,” said Ravenne Reid, 19, a student at John Jay College, as the rally near the Trump International Hotel and Tower began. “I’m worried about student loans and women’s rights and a million other issues. I couldn’t not be here.”

The rally was likely a sign of things to come over the next four years, with Trump-branded buildings in the president-elect’s hometown making the perfect backdrop for opponents of his policies.To Ms. Reid, that seemed like an opportunity. “You can’t ignore what’s outside your window,” she said. “I’m hoping the sight of all these people resonates with him personally.”

Mark Ruffalo, an actor and one of the organizers of the protest, said in a statement before the rally that “thousands of New Yorkers are coming together to stand up for one another, as we will do every day, to protect the values we hold dear — to fight for health care, criminal justice, immigrant rights, and action on climate change.”

As Mr. Trump was serenaded at a concert on the National Mall in Washington that featured performers like The Piano Guys, a YouTube sensation, and the percussionist DJ Ravidrums, Robert DeNiro, took the stage in New York to mock Mr. Trump’s twitter habit as Cher and Mr. Ruffalo watched. Later, Alec Baldwin reprised his Trump impersonation from “Saturday Night Live,” joking that he was heading over to the Russian Consulate, before calling for “100 days of resistance” from the crowd.

Speaking backstage, Cher said that she took part because “I want to show people the danger.” She also said that she doubted Mr. Trump would find the White House to his taste. “The Lincoln bedroom is fabulous,” she said, “but it’s not big.”

Somewhat unexpectedly, the election of Mr. Trump has been a political boon to Mr. de Blasio, who campaigned for Hillary Clinton and disagrees strongly with most of the major policy proposals set forth by president-elect.

In speeches and television appearances, Mr. de Blasio — who faces a re-election fight this year — has presented himself as a bulwark against the president-elect for New Yorkers who are fearful of what the incoming administration could bring about for immigrants, residents of public housing and other vulnerable groups.

His public statements have been more oppositional than those of Gov. Andrew M. Cuomo, also a Democrat, who has similarly staked out a position as a Trump opponent, although somewhat less directly. Neither New York leader will attend the presidential inauguration, but only Mr. de Blasio planned to attend a rally like the one on Thursday night that, for many involved, might be better described as a protest.

“The mayor’s presence isn’t about protesting,” said Eric F. Phillips, the top spokesman for Mr. de Blasio. “It’s about standing up for New York and clearly articulating how we won’t roll back progressive policy that has helped make our city great.”

Mr. Phillips, however, acknowledged that others present on Thursday night might be more pointed in their remarks. “I don’t anticipate everyone will be there for the exact same reason,” he said.

Indeed, outside Trump International Hotel and Tower near Columbus Circle, the voices were often anything but moderate.

Nearly an hour before the rally even started, dozens of demonstrators had gathered to voice their discontent with the incoming administration. Joan Hirsch was among a group of organizers leading chants of “No Trump, no K.K.K., no fascist U.S.A.”

“At this point, the only way to defeat Trump is mass resistance in the streets,” said Ms. Hirsch, an organizer with Refuse Fascism, an anti-Trump group. “Think Tahrir Square, think South Korea — that’s what needs to happen in this country.”

Jawanza Clark, a professor at Manhattan College, also hoped that the rally would serve as a potent image of resistance to Mr. Trump. “In some ways it’s a symbolic gesture, but it sends a message that we’re not backing down,” said Mr. Clark, 42, of Riverdale, in the Bronx. He brought along his sons Jeremiah, 10, and Jordan, 5, because, he said, “I wanted them to see the type of country they’re living in.”

The New York rally was one of many in a protest movement that has rippled across the country for days preceding Mr. Trump’s inauguration, culminating in the planned Women’s Marches on Saturday in Washington and other cities.

Caravans, buses and individual travelers have been trickling into Washington throughout the week, with protesters finding housing at local churches and on friends’ couches.

Refuse Fascism has also been holding daily marches this week throughout the capital starting on Saturday, when hundreds of protesters mixed with late night revelers on U Street. On Tuesday, tourists in the city’s downtown area encountered activists carrying signs promising to “Bring D.C. To A Halt!”

The protest, organized by Werk for Peace, brought hundreds of rainbow-clad dancers, bopping and shaking their hips to songs by Rihanna and Queen, waving rainbow flags and showering the streets with “biodegradable” glitter. Syncopated chants of “We are here, we are queer, we will dance,” erupted between songs.