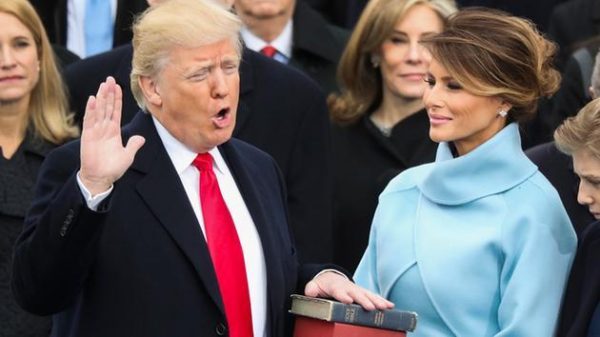 Donald Trump, officially sworn in as the 45th president of the United States, promised that he would work tirelessly for every American, vowing to put “America first.”

Trump, seated in front of his wife Melania and children and directly next to former President Barack Obama, looked reserved throughout the inauguration ceremony.

During his inaugural address, Trump told the American people that this was “their celebration.”

“This moment is your moment it belongs to you. It belongs to everyone gathered here today and everyone watching all across America,” he said.

He echoed themes that were repeated throughout his campaign, promising not to leave “the forgotten men and women” behind, and calling for a return of power to the people as opposed to politicians in Washington.

“I will fight for you with every breath in my body and I will never let you down,” he said.

“In America, we understand that a nation is only living as long as it is striving. We will no longer accept politicians who are all talk an no action — constantly complaining but never doing anything about it. The time for empty talk is over. Now arrives the hour of action,” he said.

For his closing line, Trump returned to his campaign slogan, saying that “we will make America great again.”

Immediately after his swearing in, he embraced members of his family and waved to the crowds along the National Mall.

Earlier today, the president and Melania attended a church service at St. John’s Episcopal Church and then had tea with the Obamas and political leaders at the White House before coming to the Capitol.

The new president is dressed in a suit and his signature red tie while the new first lady chose a custom-designed Ralph Lauren sky blue cashmere mock turtleneck dress with a matching cropped cashmere jacket and long suede gloves.

The inauguration of the controversial real estate mogul and former reality television star will largely follow tradition, but there will be several unique changes as well.

Jeffress is a familiar face to Trump and his eagle-eyed supporters; he has appeared with Trump at many rallies on the campaign trail.

“I’m not going to lecture the new president,” Jeffress said during an interview with Fox NewsThursday night.

Jeffress said he intends to “encourage” Trump by comparing him “to another great leader God chose.”

“[God] told Nehemiah to build a giant wall around Jerusalem to protect the citizens so I’m going to use Nehemiah’s story as an example of why God blesses leaders,” Jeffress said.

The service was closed to the media but the Trump team’s social media and senior adviser Dan Scavino Jr. shared two tweets from inside the service.

Rundown of the Day

The day’s schedule of events follows the familiar pattern of inaugurations of the past: the Trumps stayed overnight at Blair House, located across the street from the White House, and attended a traditional service at St. John’s Church.

Trump will take the oath of office promptly at noon, which marks the official transfer of power.

The inaugural address comes toward the end of the outdoor ceremony, and shortly after that, Obama will leave and Trump will attend a luncheon before the rest of the scheduled events — including the parade and various balls — fill out the landmark day.

Trump’s cabinet-level picks and former presidents have taken their seats at the Capitol ahead of the swearing-in ceremony. Rex Tillerson, Rick Perry, Nikki Haley, Betsy DeVos, Steve Mnunchin and Elaine Chao are all present.

Former President Clinton and Hillary arrived at the Capitol together. Hillary Clinton, who won the popular vote by roughly 3 million ballots, is wearing a long white coat — the same color she wore at a number of major campaign events. White holds special significance for the Suffragette movement.

Former President Jimmy Carter and former First Lady Rosalynn Carter have arrived along with former President George W. Bush and his wife Laura. Bush, when asked how his parents George H.W. and Barbara Bush are feeling, replied that they’re “doing better.” Both were hospitalized in Texas this week and are not attending today’s inauguration.

Former politicians including Bob Dole, Dick Cheney, Newt Gingrich and Rudy Giuliani have taken their seats at the Capitol. Several current senators, including former presidential candidates Bernie Sanders and John McCain, were seen laughing together as they waited for the ceremony to begin.

Trump has chosen two Bibles for his swearing-in ceremony: his childhood Bible and President Lincoln’s Bible. The only other president to use Lincoln’s Bible was Barack Obama in 2009 and 2013.

Unlike previous inaugurations, the lineup of performers has largely been kept quiet. Jackie Evancho, a 16-year-old “America’s Got Talent” alum, will be singing the national anthem.

Another abnormal facet of the day will be the sizable number of congressional Democrats who have announced they are skipping the inauguration. The latest count has one-third of all House Dems boycotting the ceremony. There is no modern precedent for a planned political boycott of this scale.

The boycott does not appear to have shaken Trump, who used his most common form of communication to make his first statement of the day. Trump sent out a tweet from his personal account, writing, “It all begins today!”

About 500 people, some wearing masks and kerchiefs over their faces, marched through the city’s downtown, breaking the windows of a Bank of America branch, a McDonald’s outlet and a Starbucks shop.

The crowd, which carried at least one sign that read “Make Racists Afraid Again, also vandalized several cars and hurled trash cans and newspaper vending boxes into the streets before being largely dispersed by police.

“The message I want to send is that Trump does not represent this country. He represents the corporate interests,” said Jessica Reznicek, a 35-year-old Catholic aid worker from Des Moines, Iowa, who participated in a peaceful march.

Not far from the White House, protesters scuffled with police, at one point throwing aluminum chairs at an outdoor café. A motorcyclist in town to celebrate Trump’s inauguration was struck in the face when he tried to intervene.

“I know, law and order and all that. We need more order. This ain’t right,” Bob Hrifko, with a bleeding cut under his eye, told Reuters. Hrifko said he was part of the “Bikers for Trump” group that was holding an inauguration rally.