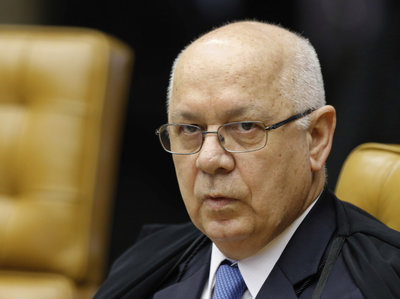 Brazil’s Supreme Court Justice Teori Zavascki, pictured here in 2015, has died in a plane crash. He had been investigating corruption allegations against Brazilian politicians and business executives. Eraldo Peres/AP
Share:

You would think the people of Brazil would be hard to shock after the turbulence that they have endured in the past few years, including a deep recession, and the impeachment of a president.

But today’s sudden death of a Supreme Court justice who was a pivotal player in an investigation into the huge Petrobras corruption scandal has come as a blow to the nation of such severity that the government has called for three days of national mourning.

Judge Teori Zavascki was killed when the light twin-propellor plane he was traveling in crashed into the Atlantic, amid heavy rain. Officials reportedly said the aircraft had left an airport in São Paulo about 80 minutes earlier. The crash was near the aircraft’s destination, the tourist town of Paraty, about 150 miles south of Rio de Janeiro.

Zavascki, 68, was a leading participant in what’s known in Brazil as the “Car Wash” investigation, a wide-ranging judicial probe into a contracts-for-kickbacks scam that revolves around the state oil company, Petrobras, and is engulfing a lengthening list of politicians and business executives. Dozens have so far been arrested, and former president Luiz Inacio Lula da Silva has been held for questioning.

The driving force behind that investigation is a judge, Sergio Moro, whose determination to expose the largest corruption scandal in Brazil’s modern history has made him a household name. Moro said in an email quoted by Reuters that he was “stunned” by the death of Zavascki, whom he called a “Brazilian hero.”

“Without him, there would be no Operation Car Wash,” wrote Moro, “I hope that his legacy, of serenity, seriousness and firmness in enforcing the law, regardless of the interests of those involved, even the powerful, will not be forgotten.”

The mourning over Zavascki’s death among Brazilians was coupled with considerable concern and speculation over the possible cause of the crash.

“Justice Teori Zavascki had been strongly driving the #Carwash investigation in the Supreme Court. It is hard to believe this was a mere accident,” tweeted the director of Brazil’s National Association of Prosecutors, Alan Mansur.

Zavascki was recently handling plea bargains by former executives from a construction conglomerate involved in the kickback scheme, Odebrecht. There’s long been speculation that the evidence gleaned from these could potentially implicate a large number of Brazilian politicians.

The recently-released testimony of one former senior Odebrecht executive repeatedly cited Brazil’s President Michel Temer, and leveled allegations of illegal campaign financing. Temer denies these accusations which, though unlikely to topple his government, could prove destabilizing in the coming months.

Temer responded swiftly to Zavascki’s death with a TV address to the nation in which he spoke of his great sorrow at the judge’s death, describing him as a “good man” and a symbol of national pride.