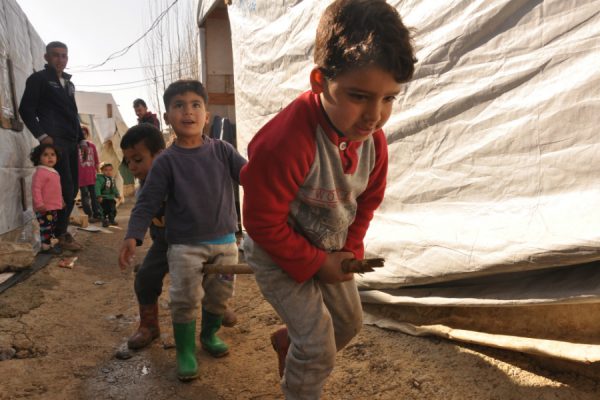 By Nicholas Blanford
TAANAYEL, LEBANON—Syrian rebel groups announced Monday that they will attend next week’s Russia- and Turkey-brokered Syria peace talks in Kazakhstan, giving a boost to hopes that a current cease-fire can be hardened into a more enduring agreement.

The talks are intended to build on the two-week cease-fire with the goal of ending a six-year conflict that has left more than 300,000 people dead, caused billions of dollars of destruction, forced more than half the Syrian population from their homes, and contributed to the greatest refugee crisis in Europe since the end of World War II.

But the fate of the estimated 11 million displaced Syrians is unlikely to be addressed, leaving their destiny on hold.

For many Syrian refugees, an eventual return to a country devastated by war and still ruled by the regime of President Bashar al-Assad is an unappealing prospect. Instead, these refugees, some of whom have spent more than three years away from their homes, say they have no future in Syria and are looking to settle elsewhere.

“Syria is like a broken pane of glass. It cannot be put back together. The sectarian divisions are too deep. I want to go to Britain,” says Mortaz Khallaf, a 32-year-old law graduate from Aleppo in northern Syria. Khallaf is the shawish, or manager, of a small refugee camp set among a plantation of spindly poplars on the edge of this village in Lebanon’s Bekaa Valley.

Numerous negotiation rounds have been held since 2012. But these talks, which are expected to start Jan. 23 in the Kazakh capital of Astana, are the first to leave the United States and United Nations on the sidelines. Instead, Russia and Turkey have seized upon the fall last month of rebel-held eastern Aleppo to government forces to push for a negotiated peace. Moscow is a powerful backer of the regime of Syrian President Assad, while Ankara has championed the Syrian opposition, but both countries have found common interests in Syria allowing them to co-sponsor the Astana talks.

Progress in Astana could give renewed life to the UN peace track that resumes in Geneva next month.

“We hope Astana strengthens the cease of current hostilities and generates favorable conditions for the political dialogue we want to re-establish at the beginning of February,” said Staffan de Mistura, the UN envoy to Syria.

‘They don’t want us back’

The inhabitants of Camp 006 near Taanayel take a gloomier view. Even if the talks achieve some success, which they doubt, it is unlikely any of them will return home anytime soon – even if they wish to.

“We expect nothing of the Astana talks. We don’t expect peace,” says Khallaf.

Lebanon hosts 1.1 million refugees, according to the United Nations, although the true figure is thought to exceed 1.5 million. It’s a huge burden for a country of only 4.5 million citizens.

The residents of Camp 006 are from Aleppo, Qusayr, five miles north of the Lebanese border, and Raqqa in central Syria. Each refugee receives monthly UN food coupons totaling $27 to be spent in local stores. Extra income is earned by working in fields of this mainly agricultural area. But each household, living in timber-framed huts walled and roofed with plastic sheets, is required to pay around $73 rent each month. Even electricity must be paid for – the government installed a meter in the camp to tally usage.

Despite these hard conditions – and with the Syrian border only a tantalizing seven miles to the east across snow-capped mountains – most of the refugees here have abandoned hope of returning home, and instead gaze to the West for eventual sanctuary. Many Syrians in Lebanon joined the flow of refugees streaming into Europe over the past two years to start fresh lives.

Even those who hanker to return to their abandoned homes fear they will never get the opportunity.

Khallaf al-Khaled was forced to leave his home in Qusayr in June 2013 when Lebanese Hezbollah over-ran the rebel-held town. The mainly Sunni population of Qusayr and the surrounding villages have not returned, and Qusayr has become an important military base for Hezbollah. In November, the powerful Iran-backed group held a parade in Qusayr, showing off dozens of tanks and armored vehicles in a calculated display of strength.

Khaled, a portly farmer with a red and white kaffiyeh around his head and wearing a thick black leather jacket to keep out the chilly air, says he would like to go home, but fears that it will no longer be possible.

“I don’t think I can go back. The regime is doing ethnic cleansing. They don’t want us back in Qusayr,” he says. He claimed that Syrian Shiites originally from two villages in northern Idlib province have been resettled in Qusayr in homes formally owned by Sunnis.

The Syrian opposition has long alleged that the Syrian government is forcing Sunnis to leave areas of strategic importance, especially around Damascus and adjacent to the border with Lebanon. The Syrian government denies such allegations. However, several hundred opposition fighters have been voluntarily relocated to Idlib province, which is largely in rebel hands, in a series of cease-fire deals with the government.

“They are putting Sunnis in Idlib so that they can eventually smash us, kill us all at once, like Pif Paf,” says Mr Khallaf, the camp manager, referring to a popular brand of insect repellent in Lebanon.

Even if returning to Syria one day is viewed as a daunting prospect, remaining a refugee in Lebanon offers little better opportunities. Host communities are tiring of the refugee presence and international pledges of funding to ease the burden have been slow to materialize.

On Monday, Lebanese prime minister Saad Hariri met with a UN delegation in Beirut to press for help in dealing with the refugee crisis.

“Five years ago, our population was 4.5 million and today we are at 6 million,” he said. “The whole country is suffering from the presence of the refugees. The international community has to help because we have less electricity, less water, less infrastructure, fewer schools, and less hospital beds.”
Lebanon has hosted several hundred thousand Palestinian refugees since 1948, confined to squalid refugee camps, their destiny dependent on the ever elusive Middle East peace process. Now, Syrian refugees fear they will share the same fate as the Palestinians.

“We are like the Palestinians,” says Khallaf. “If you stay in your country, you die. If you leave, you never go back.”